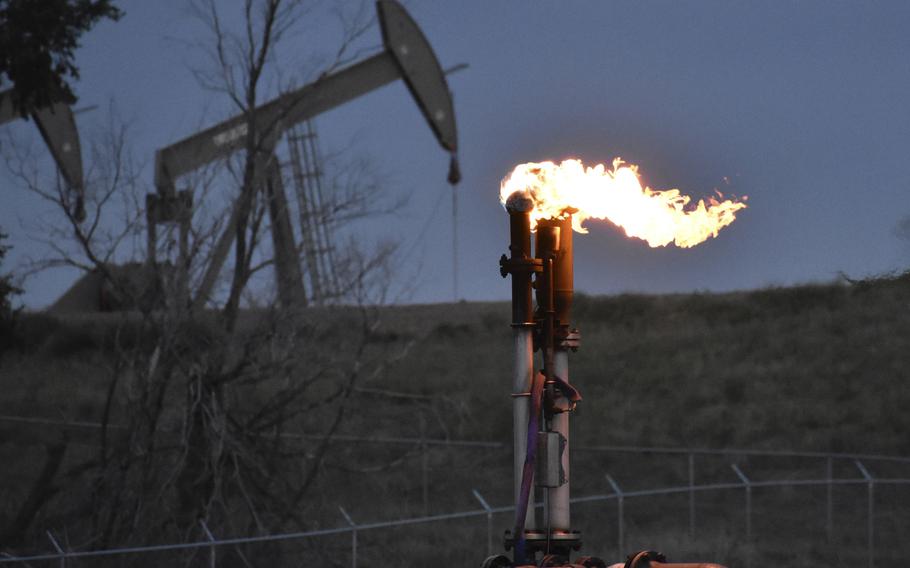 A flare to burn methane from oil production is seen on a well pad near Watford City, North Dakota, Aug. 26, 2021. A huge social and environmental policy bill passed by House Democrats includes a plan to impose a fee on emissions of methane, a powerful pollutant that leaks from oil and gas wells and contributes to global warming. (Matthew Brown/AP)

WASHINGTON — A Democratic plan to impose a fee on methane emissions from oil and gas wells has cleared a key hurdle, but it faces strong opposition from the oil and gas industry and criticism by centrist Sen. Joe Manchin.

The proposed fee on methane — a powerful pollutant that contributes to global warming — was included in a huge social and environmental policy bill passed by House Democrats last Friday.

As the bill moves to the Senate, attention again will focus on Manchin, a West Virginia moderate who has already forced fellow Democrats to abandon one of their biggest climate proposals: a clean-electricity program that would boost wind and solar power while phasing out coal- and gas-fired power plants.

Manchin, whose state is a leading producer of coal and natural gas, has said he worries a methane tax could be used to drive energy companies out of business. He said before the House vote that he wants to make sure the fee is structured to incentivize innovation and not just "punish" energy companies "for the sake of punishing" them.

A spokeswoman for Manchin declined to comment after the House vote, but Democrats in the House and Senate said they are confident the fee will remain in the Senate bill, despite a 50-50 split in the chamber that gives every Democrat veto power. Republicans unanimously oppose the bill.

Language approved by the House represents a compromise that would slap a rising fee on excess emissions at oil and gas facilities, reaching $1,500 per ton in 2025, along with $775 million in subsidies for companies that take steps to reduce emissions.

"We have this very important provision with regard to methane emissions that was worked on with the senators and was also worked on with House members over the last few weeks,'' Pallone said at a news conference Friday. "So I believe this is pretty much it. I mean, there may be some additional changes, but ... in terms of paying for it and in terms of the actual substantive authorizing language, I think we're pretty solid at this point.''

While the Senate may make minor revisions over the next few weeks, "nothing major, in my opinion,'' will be changed or taken out, Pallone said.

Delaware Sen. Tom Carper, a Democrat who chairs the Senate Environment and Public Works Committee, also is optimistic that the methane fee — formally known as the Methane Emissions Reduction Program — will be included in the final bill.

"Instead of punishing industry, our program incentivizes good behavior, phases in over time, and ramps up (fees) over time as well,'' Carper said in a statement. "It's good for the planet and good for job creation — a win-win in my book."

The proposed methane tax comes as President Joe Biden launches a wide-ranging plan to reduce methane emissions, which pack a stronger short-term punch on climate than even carbon dioxide.

Biden pledged at a U.N. climate summit in Glasgow, Scotland, earlier this month to work with the European Union and dozens of other nations to reduce global methane emissions by 30% by 2030.

The centerpiece of U.S. actions is a long-awaited rule by the Environmental Protection Agency to tighten methane regulations for the oil and gas sector. The proposed rule would for the first time target reductions from existing oil and gas wells nationwide, rather than focus only on new wells as previous regulations have done.

The new U.S. rule, along with the global pledge, should "make a huge difference," not only in fighting climate change, but in improving health and reducing asthma and other respiratory problems, Biden said in Glasgow.

Once finalized, the proposed requirements should reduce methane emissions from U.S. drilling operations and equipment by approximately 75% by 2030, compared with 2005 levels, the White House said.

The oil and natural gas industry, the nation's largest industrial source of methane emissions, supports methane regulation but opposes the congressional fee as an unnecessary tax that could drive up energy costs and result in the loss of thousands of jobs.

"This is a tax on American natural gas that makes us less competitive,'' said Frank Macchiarola, senior vice president of the American Petroleum Institute, the industry's top lobbying group.

"At a time of rising energy costs, it's a flawed policy to raise costs on energy producers,'' he said, adding that he is hopeful the Senate will eliminate the proposal. Independent analysts say the methane fee would likely cost producers at least $1 billion a year once it is fully implemented.

"Sen. Manchin is a supporter of American energy, so it makes sense for him to take a close look" at the proposed fee, Macchiarola said.

Environmental groups call methane reduction the fastest and most cost-effective action to slow the rate of global warming. Current rules for methane emissions from U.S. oil and gas wells only apply to sources that were built or modified after 2015, leaving more than 90% of the nation's nearly 900,000 well sites unregulated. Many of those sites are smaller, low-producing wells.

A group of Texas Democrats in the House initially opposed the methane fee, but ended up supporting the compromise. Only one Democrat, Maine Rep. Jared Golden, opposed the House legislation.

"No bill is perfect,'' said Rep. Henry Cuellar, D-Texas, who voted for the measure despite misgivings over methane. The House bill would improve access to affordable child care and pre-kindergarten, boost Medicaid coverage and provide billions of dollars to combat the climate crisis, he said.

Even so, Cuellar said he would continue lobbying the Senate to strip the methane fee from the legislation.