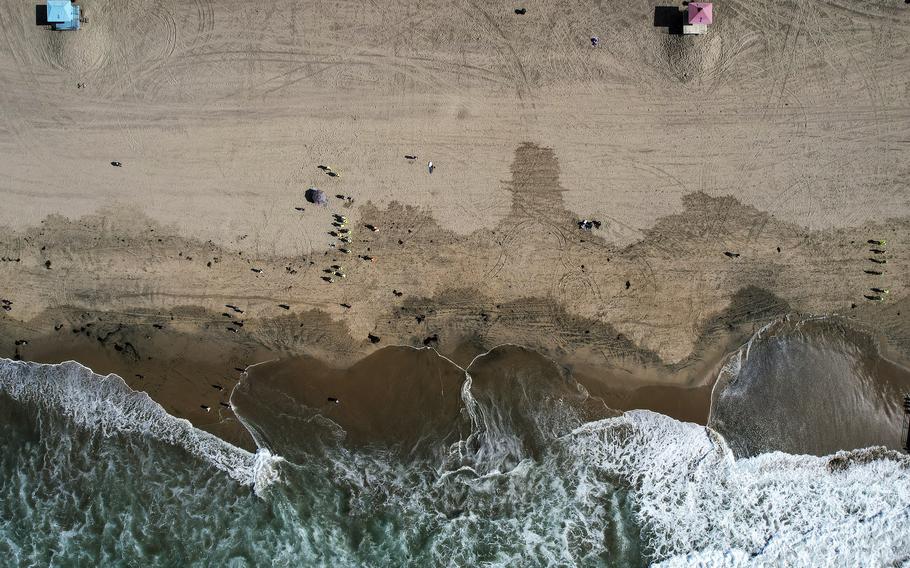 This aerial photo taken with a drone shows beachgoers as workers in protective suits continue to clean the contaminated beach in Huntington Beach, Calif., on Oct. 11, 2021. Officials were investigating an oil sheen spotted Saturday, Nov. 20, near last month’s crude pipeline leak off Southern California’s coast. The U.S. Coast Guard said in a statement the oil sheen is about 70 feet by 30 feet and that it has dispatched “pollution responders, aircraft and boats” to investigate. (Ringo H.W. Chiu/AP)

The U.S. Coast Guard on Saturday dispatched aircraft and boats to investigate the oil sheen measuring about 70 feet by 30 feet off the coast of Orange County.

Coast Guard officials said Saturday night that the sheen had dissipated they would continue monitoring the area.

The Los Angeles Times reported that divers preparing to do a routine inspection of the damaged pipeline noticed small oil droplets near the damaged section, which since the spill has been wrapped in a material called Syntho-Glass. The divers removed the wrap and replaced it with a new one, said Eric Laughlin, a spokesman for the California Department of Fish and Wildlife.

The pipeline has been shut down and no oil has flowed through it since the Oct. 2 spill, Lughlin said Sunday. The oil spotted Saturday was "likely residual," he said.

The sheen was located in the same area where the underwater pipeline owned by Houston-based Amplify Energy leaked up to about 25,000 gallons of crude on Oct. 2. Oil washed ashore, tarring the feathers of dozens of birds and leading to rescues of marine mammals.

The impact of the spill was less than initially feared, but it affected local wetlands and wildlife and shut the shoreline in surf-loving Huntington Beach for a week.