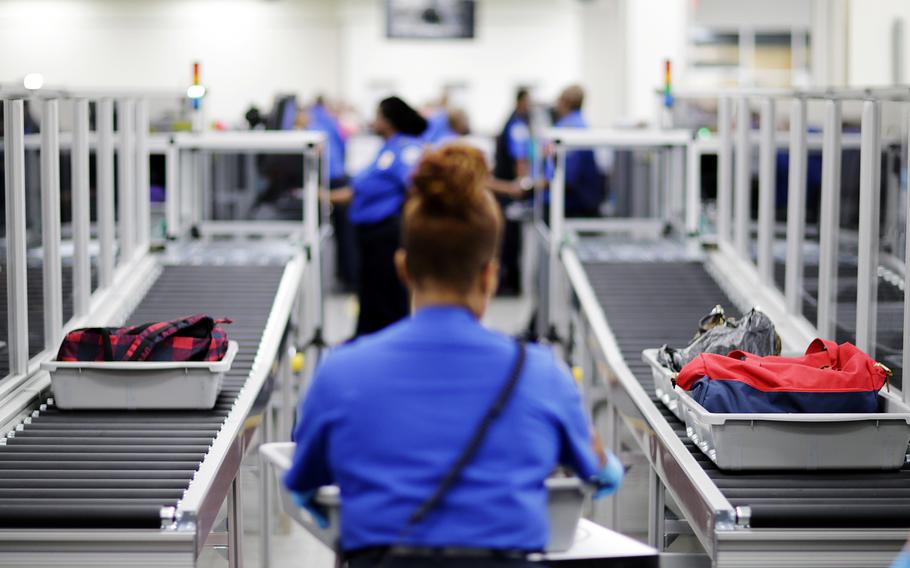 FILE - In this May 25, 2016, file photo, bins containing bags needing additional screening are automatically separated on a conveyer belt at a newly designed passenger screening lane unveiled at Hartsfield-Jackson Atlanta International Airport in Atlanta. A passenger undergoing a search at the Atlanta airport's main security checkpoint reached into a bag and grabbed a firearm, and it went off, causing chaos among travelers and prompting a temporary ground stop on flights Saturday afternoon, Nov. 20, 2021, authorities said. The TSA said the passenger fled out an airport exit. (AP Photo/David Goldman, File) (David Goldman)

ATLANTA — A passenger awaiting a search at the Atlanta airport's main security checkpoint reached in his bag and grabbed a firearm, and it went off, causing chaos among travelers and prompting a temporary FAA ground stop on flights Saturday afternoon, officials said. The man fled.

The man, later identified as a convicted felon, ran with the gun from the checkpoint and escaped out an airport exit, the Transportation Security Administration said. Authorities said it was not an active shooter incident and described the discharge as accidental.

Police said later they had issued a warrant for the arrest of the passenger, 42-year-old Kenny Wells. In this undated booking photo provided by the Atlanta Police Department is suspect Kenny Wells. Authorities say a passenger awaiting a bag search at the Atlanta airport’s main security checkpoint reached into the bag and grabbed a firearm, and it went off, causing chaos among travelers and prompting a temporary FAA ground stop on flights Saturday afternoon, Nov. 20, 2021, officials said. Police said later Saturday evening that they had identified the passenger as a 42-year-old convicted felon, Wells, and a warrant was issued for his arrest. (Atlanta Police Department via AP)

The airport's police commander, Maj. Reginald Moorman, said Wells was being sought on charges including carrying a concealed weapon at a commercial airport, possession of a firearm by a convicted felon, discharging a firearm and reckless conduct.

"We are actively pursuing this individual as we speak," Moorman said at a news briefing Saturday evening with TSA and airport officials.

The discharge caused a frenzy on social media as alarmed travelers posted videos to Twitter and other sites showing and describing moments of chaos and confusion at Hartsfield-Jackson Atlanta International Airport, one of the nation's busiest.

Authorities said three people suffered minor injuries, including one person who fell in the airport's atrium area away from the checkpoint, and two complaining of shortness of breath. Police said they had to work crowd control until things calmed.

A TSA official said no one was shot.

"We were fortunate that when the firearm went off, no one was seriously injured," Robert Spinden, the TSA's director of federal security for Georgia, said at the airport briefing. Officials didn't immediately disclose the type of weapon involved.

Social media users reported there were long lines afterward and missed flights for some. The incident came ahead of the peak Thanksgiving holiday travel season as people are still coping with the concerns of safely traveling during the ongoing COVID-19 pandemic.

Although the FAA ordered a temporary ground stop, airport officials said operations never ceased and the airport didn't close. They said the airport returned to normal operations in under two hours.

The TSA statement said it all began when the passenger was about to undergo a bag search by an official at 1:30 p.m. at the airport's main checkpoint after an X-ray scan detected what was described as a "prohibited item."

"He advised the passenger not to touch the property, and as he opened the compartment containing the prohibited item, the passenger lunged into the bag and grabbed a firearm, at which point it discharged. The passenger then fled the area," according to the statement.

The Atlanta Journal-Constitution reported social media users rushed from the airport in the chaos after hearing the gun going off. One video posted on Twitter showed people running out of the terminal, some anxiously glancing back.

After Atlanta police gave the all-clear normal operations resumed at the airport before 3:30 p.m. TSA said all passengers had to be re-screened.

The TSA said the incident underscores the importance for all passengers of checking personal belongings for dangerous items before leaving for the airport. Passengers caught with firearms at airport checkpoints face a civil penalty. The TSA says firearms may be allowed in checked baggage when they are unloaded and packed in a locked, hard-sided case.

Last month, federal officials reported a spike in firearm seizures at Atlanta's airport — part of a record year for the number of guns detected at airport security checkpoints.

The TSA said it seized 391 firearms at Hartsfield-Jackson airport in the first nine months of 2021. That was up from 220 last year when passenger counts were down significantly because of the pandemic. But it also was a big jump from 2019, when 323 firearms were seized in Atlanta.

Across the nation, the TSA said, it had stopped 4,495 airline passengers from carrying firearms onto their flights by Oct. 3 of this year, surpassing the previous record of 4,432 firearms caught at checkpoints in all of 2019.

The agency's news release last month noted the record came despite a continued dip in passengers because of the pandemic. Authorities did not offer an explanation or theory about the spike in gun seizures.

Hartsfield-Jackson is one of the nation's busiest airports, though other U.S. airports rival its passenger screening numbers. Dallas Forth Worth International Airport was second on the TSA's list, with 232 firearms seized by Oct. 3.