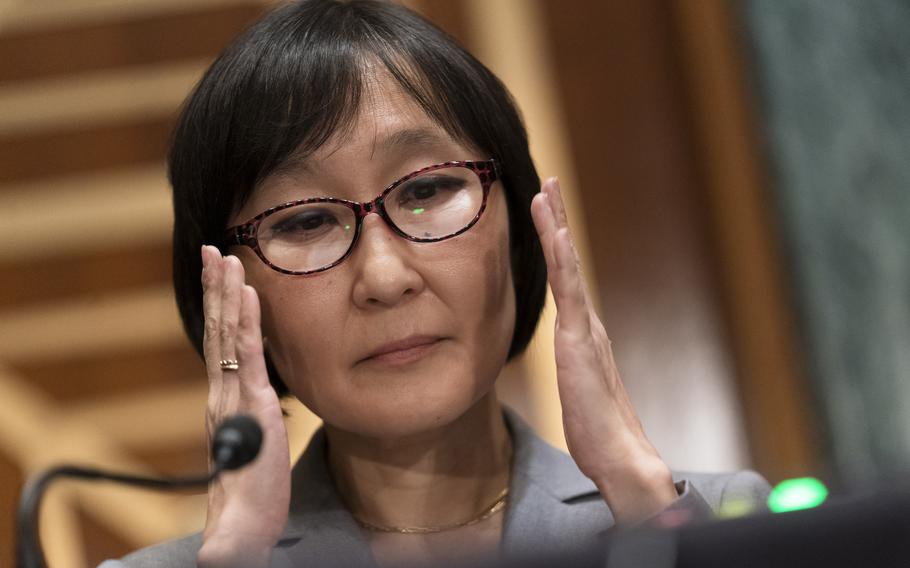 Saule Omarova of New York testifies before a Senate Banking, Housing, and Urban Affairs hearing on Capitol Hill in Washington to examine her nomination to be the Comptroller of the Currency, Thursday, Nov. 18, 2021. (Manuel Balce Ceneta/AP)

WASHINGTON — President Joe Biden’s choice to become one of the top banking regulators endured a contentious nomination hearing Thursday, with Republican senators warning she would nationalize the U.S. banking system and Democrats saying she’s eminently qualified and would be tough overseer of Wall Street.

Saule Omarova, 55, was nominated in September to be the nation’s next head of the Office of the Comptroller of the Currency. If confirmed, she would be the first woman and person of color to run the 158-year-old agency.

Omarova is a long-time academic and well-regarded expert on financial regulation, but many Republicans and the banking industry have taken issue with several papers published during her career where she’s proposed wholesale changes to the banking system.

On Thursday, Omarova fielded questions about her academic writings and whether she would have the power to implement those proposals. She was also asked by Republicans whether it was appropriate for banks to not lend to certain industries if they chose, such as the oil and gas industry and gun manufacturers. Democrats focused on blunting the GOP attacks.

“Taken in totality, her ideas do amount to a socialist manifesto for American financial services,” said Sen. Pat Toomey of Pennsylvania.

Another Republican senator, referring to Omarova’s childhood in the former Soviet Union, said he did not know whether to call her “professor or comrade.”

The banking lobby is overwhelmingly against the nomination, with opposition coming from both the big Wall Street institutions and smaller community banks. In an interview with The Associated Press this week, Omarova said their opposition is largely due to fears that she would be a tough regulator for Wall Street and the banks.

During the hearing, Omarova said she would be advocate for smaller banks and keep a close eye on the large banks who tend to outcompete smaller institutions.

Several media outlets have reported on Omarova’s arrest in 1995 for shoplifting hundreds of dollars of merchandise from a T.J. Maxx store in Madison, Wisconsin. The police report of the incident was posted in a tweet Wednesday by the American Accountability Foundation.

“I wish the community bankers and their trade associations actually read more carefully what I have written,” Omarova said.

Republicans on the committee focused most of their questioning or statements on Omarova’s past writings and public comments.

Last year, she published a paper arguing for an overhaul of the nation’s banking system that would expand the Federal Reserve’s role by allowing the central bank to hold consumer deposits. Proponents of such a move say the Fed could extend credit more quickly when needed to individual accounts during times of economic downturns. Following the Great Recession, banks hoarded deposits and did little lending to rebuild their balance sheets.

“You’ve clearly scared the heck out of them,” said Sen. Mike Rounds, R-South Dakota, referring to the banking industry’s opposition to her based on her writings.

Sen. Elizabeth Warren, D-Massachusetts, a long-time critic of the big banks, called the criticism of Omarova “a vicious smear campaign, coordinated by Republicans who are doing the (industry’s) bidding.”

The nomination could hinge on moderate Democratic senators who sit on the Banking Committee: Jon Tester of Montana and Kyrsten Sinema of Arizona. Republicans are united in their opposition and Toomey and others tried to paint Omarova as a radical choice in order to dissuade Tester and Sinema from giving their support.

Tester said during his questioning he still had “significant concerns” about Omarova’s nomination even after meeting with her privately. Tester focused most of his questions on Omarova’s previous opposition to a bipartisan law that eased some of the restrictions placed on banks after the 2008 financial crisis. He was a co-sponsor of that law.

Omarova said her criticism of that law was narrow. She said she approved of how it lessened the regulatory paperwork required of small community banks.

Omarova was born in Kazakhstan when it was part of the Soviet Union and immigrated to the U.S. in 1991. She has worked primarily as a lawyer and, for the last several years, at Cornell University as a professor of law. Over the years she has testified numerous times as an expert witness on financial regulation. She worked briefly in the administration of President George W. Bush.

Her origins in the former Soviet Union have become red meat for some members of Congress and their allies in the conservative press. Toomey requested a copy of a graduation paper she wrote about Karl Marx “in the original Russian” when she was an undergraduate at Moscow State University. Omarova said she no longer had a copy of that paper.

While some senators at the hearing tried to downplay this narrative, the issue was raised by Sen. John Kennedy, R-Louisiana. The senator inquired as to whether Omarova still had a membership with youth Soviet communist organizations.

“I don’t know whether to call you professor or comrade,” Kennedy said, a comment that elicited some gasps in the hearing room and, later, a rebuke from the chairman of the committee, Sen. Sherrod Brown, D-Ohio.

In her introductory testimony, Omarova emphasized a point she’s made previously, that members of her family in Kazakhstan were persecuted and killed under Stalin’s regime for not joining the Communist Party. She became an American citizen in 2005.

“I am not a communist,” Omarova said strongly. “I could not choose where I was born.”

Omarova’s nomination will likely go to a vote in front of the Banking Committee in December.