by
WILL WEISSERT and ERIC TUCKER
• Associated Press • November 17, 2021
This story has been corrected. 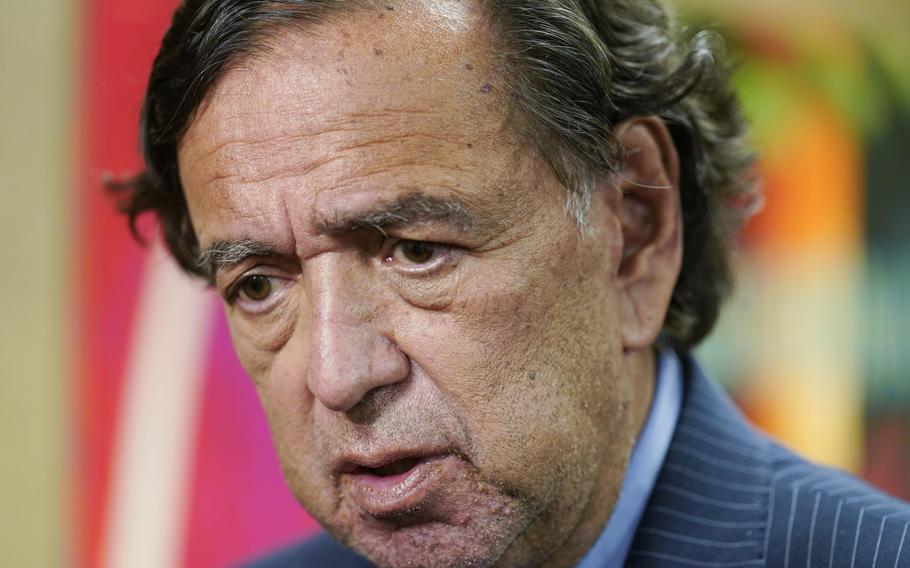 Former U.S. diplomat Bill Richardson speaks to reporters after a news conference in New York, Tuesday, Nov. 16, 2021. American journalist Danny Fenster, who was recently sentenced to 11 years of hard labor after spending nearly six months in jail in military-ruled Myanmar, has been freed with the assistance of Richardson, who helped negotiate the release. (Seth Wenig/AP)

WASHINGTON — Bill Richardson's success in helping secure journalist Danny Fenster's release from a Myanmar prison is the latest demonstration of the former New Mexico governor's knack for flying into some of the most closed societies on earth and persuading those in charge to do Washington a favor.

From Iraq to Sudan to North Korea, Richardson has repeatedly proven willing to talk with dictators, military juntas and reclusive strongmen — forging relationships with notorious regimes outside formal diplomatic channels.

"I think there was a certain amount of trust between myself and the commanding general," Richardson told reporters in New York on Tuesday, referring to Senior Gen. Min Aung Hlaing, Myanmar's ruler. "I treated him with respect, he treated me with respect."

Richardson's missions have often come with the blessing of Democratic presidents, though their open public endorsement is rarer until after the fact. Striking that balance allows foreign officials to believe they are talking to someone who can be an informal conduit to top U.S. authorities even as the administration says publicly it won't negotiate with rogue states.

Before Richardson intervened, Fenster, the managing editor of Frontier Myanmar, spent nearly six months in jail and was sentenced last week to 11 years of hard labor.

The former governor was initially criticized by some human rights activists for visiting Myanmar earlier this month, making him the highest-profile American to visit the country since its ruling military junta overthrew Aung San Suu Kyi's civilian government in February.

Richardson countered Tuesday by suggesting that though he was attacked for bestowing legitimacy with a photo-op, what he was really doing was laying the groundwork for Fenster's release.

"I plead guilty to photo-ops and getting human beings rescued and improving the lives of human beings," said Richardson, who spent his 74th birthday on Monday flying with Fenster from Myanmar to Doha, Qatar, before traveling on to New York.

Richardson was the Democratic governor of New Mexico from 2003 to 2011. The bilingual son of an American father and Mexican mother, he grew up in Mexico City and pitched for Tufts University's baseball team.

He's also a former U.S. ambassador to the United Nations, energy secretary and congressman who served on the House Intelligence Committee. Some of his most prominent global work began in December 1994, when he was visiting North Korean nuclear sites and word came that an American helicopter pilot had been downed and his co-pilot killed.

The following year, and after a personal appeal from Richardson, Saddam Hussein freed two Americans who had been imprisoned for four months, charged with illegally crossing into Iraq from Kuwait. In 2006, he helped secure the release of Paul Salopek, a then-Chicago Tribune correspondent who was jailed in Sudan.

Richardson has been involved in other high-profile prisoner releases more recently, including the 2014 freeing of U.S. Marine reservist Sgt. Andrew Tahmooressi, who had been imprisoned for crossing into Mexico with loaded guns.

"I have chosen to reach out to him on every single case I have worked on," said Jonathan Franks, a consultant who has collaborated with Richardson multiple times on efforts to free wrongful detainees. "Part of that is he is willing to do stuff that the government either can't or won't."

Franks described Richardson as invaluable in representing the interests of Navy veteran Michael White, who was ultimately released by Iran last year in a deal trumpeted by the Trump administration — including by regularly checking in with White's mother and by passing along messages and requests about his welfare.

"I made the pitch on behalf of their people — humanitarian issues, vaccines," Richardson said. "I said, 'Let's find ways to help the people and maybe I can help with the U.N. agencies, with member countries, donor countries.'"

Richardson ran briefly ran for president in 2008, becoming the first Hispanic candidate with a legitimate shot at the White House. He produced political ads recalling his 1995 visit to Baghdad and work to help free the two Americans, one of whom was from Iowa, whose caucus kicks off presidential primary voting. In a contest dominated by Barack Obama and Hillary Clinton, however, Richardson's presidential campaign didn't resonate with voters.

In 1995, he left Burma frustrated after its military junta refused to allow him to visit detained opposition leader Aung San Suu Kyi. In 2011, Richardson traveled to Cuba to try to see a jailed American contractor. He was denied access to Alan Gross, who was sentenced to 15 years in prison for bringing unauthorized communications equipment onto the island, and left saying he felt the Cuban government wasn't serious about trying to improve relations with the U.S.

Still, that Richardson can focus exclusively on the release of a captive American, rather than broader geopolitical considerations, is a particular benefit, Franks noted, especially in places where the U.S. has frayed or nonexistent diplomatic ties.

"If the goal is to bring the American home no matter what, and to do so sort of unencumbered by politics or bureaucracy or any of the other things that kind of fall along with the government," he said, "sometimes it's just easier, I guess, for some of these folks to chat with him than it is to chat with US government."

This story has been updated to CORRECT that Richardson previously visited Myanmar earlier this month, not in February.
Chrissy Yates