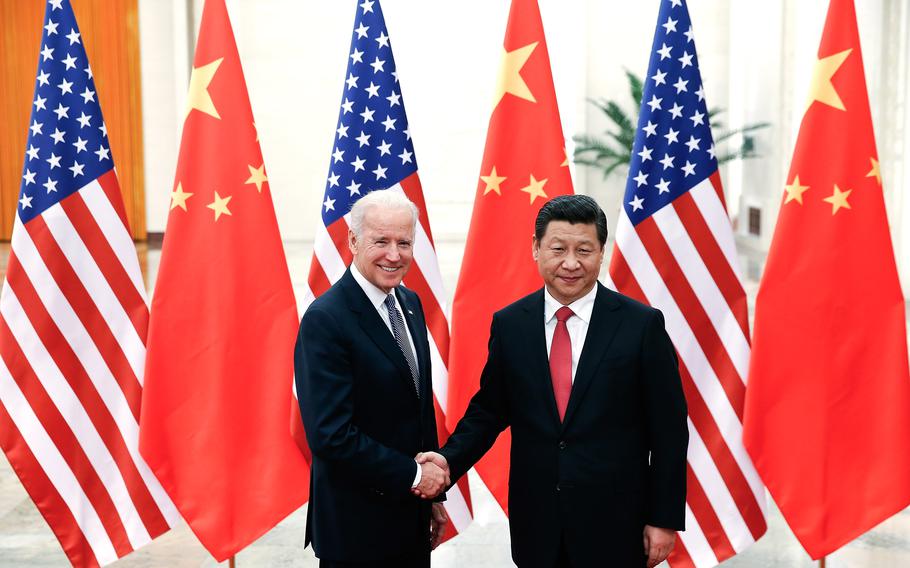 Recent headlines make it seem as if the nuclear-armed powers are hurtling toward conflict. More and more analysts warn that China’s President Xi Jinping is preparing for war sometime in the next few years to seize an island that Beijing has threatened to overrun ever since the Communist Party took power in 1949.

But underneath the surface, signs are increasing that the U.S. and China are starting to climb out of the diplomatic spiral that began with former President Donald Trump’s steel tariffs in March 2018.

Biden and Xi this month announced plans for a video summit in the coming weeks — the first public meeting between leaders of the countries in more than two years. On Tuesday, China described talks between U.S. Treasury Secretary Janet Yellen and Chinese Vice Premier Liu He as “pragmatic, candid and constructive.” Both governments also set up a working group to solve thorny issues.

The conflicting signals reflect the political realities facing both leaders, who need some level of cooperation to protect their own economies yet can’t afford to look weak. That has thrust Taiwan back to the fore as a proxy front, a role it has played for much of the past seven decades since rival Chinese governments reached their current stalemate across the Taiwan Strait.

Speaking up for the island’s popularly elected government helps Biden maintain American credibility in a region under growing Chinese influence, while potentially giving Beijing greater incentive to compromise on other issues, said Wen-Ti Sung, a lecturer at Australian National University.

“So long as there is sufficient communication between the U.S. and China, and they can be reassured that both sides aim for competition without catastrophe, then cooperation between the world’s two largest economies will remain possible and even desirable, regardless of the tough rhetoric they have been exchanging in public,” Sung said.

Biden, who Trump regularly accused of being soft on China during last year’s presidential campaign, must convince voters and U.S. allies that he can stand up to Beijing. At the same time, he needs Xi’s cooperation on global issues such as combating climate change and stabilizing places like Afghanistan and North Korea.

Xi, who faces his own “re-election” as Communist Party leader next year, can’t afford to look weak on an issue as emotionally charged as Taiwan’s sovereignty. But he also needs stable relations with the rest of the world to keep China’s export-dependent economy on track and meet pledges to improve living standards across the board — goals a war would jeopardize.

The two sides traded barbs over Taiwan almost daily this week, with China condemning Secretary of State Antony Blinken’s call for increased Taiwanese participation at the United Nations as a violation of the agreement that allowed Washington and Beijing to establish ties. On Thursday, Taiwan’s president, Tsai Ing-wen, confirmed the presence of some American troops on the island, which the Communist Party’s Global Times newspaper denounced as “one of the most dangerous factors that could trigger a war in the Taiwan Straits.”

The tensions center on Beijing’s claim that Taiwan is part of its territory and its vow to use military force to prevent its formal independence. The U.S. and its allies such as Japan argue the international community must signal resolve to discourage Xi from trying to absorb Taiwan after pacifying the former British colony of Hong Kong.

“We are in a situation where all sides are trying to deter each other, but those deterrent moves are interpreted as aggression,” says Shelley Rigger, a political science professor at Davidson College who has authored several books on Taiwan. “The People’s Republic of China is afraid the U.S. could give Taiwan the green light to make a run for it, so it’s doing everything in its power to deter the U.S. and Taiwan from busting a move.”

The risks of miscalculation are real even if nobody wants a war, especially after the U.S.’s chaotic withdrawal from Afghanistan in August. Biden’s pledge to defend Taiwan isn’t spelled out in any law or treaty, raising questions about how a war-weary U.S. would respond. The Washington security establishment is divided over how soon Xi will have the military capability to mount an amphibious assault across the Taiwan Strait and prevent an American intervention.

Increased Chinese, Taiwanese and U.S. military activities in the region raise the possibly of a collision or confrontation. Taiwan’s Defense Ministry said this month that the closer People’s Liberation Army planes get, “the stronger we will hit back,” in what was seen as a warning for them not to follow through on state media threats to fly over the island.

“We’re in a security dilemma where Beijing is convinced it has to take tougher measures to counter what they see as U.S. shifts in long-standing policy,” said Kharis Templeman, an adviser to the Project on Taiwan in the Indo-Pacific at Stanford University’s Hoover Institution. “And the Biden administration is increasingly worried Beijing might actually be thinking about a military option and wants to signal its seriousness about defending Taiwan.”

The U.S. and China have been publicly feuding over Taiwan for years. And they continued to spar even as top envoys met in Geneva earlier this month and agreed to set up the summit between Biden and Xi. Talks to set up that meeting have continued, despite the latest volleys.

Ryan Hass, who was director for China, Taiwan and Mongolia on former President Barack Obama’s National Security Council staff, said the risk of a “deliberate” conflict remains low through 2024, even if tit-for-tat responses on Taiwan continue to raise U.S.-China tensions.

“While the risk of conflict cannot be ruled out, and the U.S. and Taiwan must strengthen efforts to sustain deterrence in the face of China’s significant military build-up, the near-term risk likely is far lower than a casual perusal of American commentaries on the subject would suggest,” Hass said.