Lawmakers alarmed by hunger in US military families 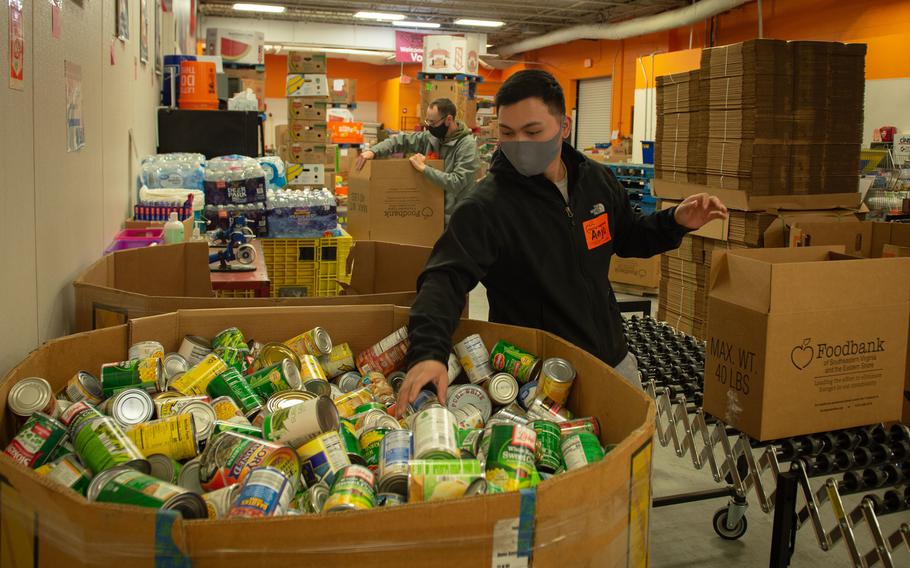 “Studies have found that one in eight military families were food insecure prior to the COVID-19 pandemic and this number has now grown to one in five,” the report said.

In June, the House Appropriations Committee’s comparable report had called the development “alarming.”

And both appropriations reports demanded more data from the Pentagon on the problem’s extent.

Neither committee’s finding has drawn public attention. But their statements form the latest sign of quietly growing congressional worries that, in the world’s richest country, with an annual defense budget of about three quarters of a trillion dollars, the lowest-ranking American military personnel, especially if they have multiple dependents, often do not earn enough to adequately eat.

While Congress might benefit from more data of the kind sought by appropriators, anti-hunger activists say there is no dispute that the problem is enormous and unacceptable.

“While there is nothing wrong with gathering data per se, we don’t need to — and cannot — wait any longer for concrete policy solutions,” said Josh Protas, vice president of public policy at MAZON: A Jewish Response to Hunger. “Even before the pandemic, which hit military families hard and increased unemployment among military spouses, food pantries operated on or near every military installation in the United States. We need not wait for another report to know that military families around the country are struggling and that a military family basic needs allowance would help them put food on the table.”

Protas was referring to provisions in the National Defense Authorization Act bills in both chambers. Both bills would give some troops a “basic needs allowance” to ensure no servicemember’s income falls below 130 percent of the poverty line.

Critics say the Senate’s version is not generous enough. The Senate bill would cost around $1 million a year, giving about 500 families an average of $200 a month, while the House bill would help 3,000 families with $400 a month on average, costing just over $14 million per year, according to Congressional Budget Office figures.

For context, the president’s fiscal 2022 request for defense spending is $753 billion, and Congress may provide more than that.

The Biden administration has indicated it is uncertain whether to support the House or Senate versions. Two dozen military family groups wrote the president last week urging him to back the House bill.

The House Appropriations Committee report, published in late June with the fiscal 2022 defense bill, said the problem of hunger in the military is growing and that reservists are particularly affected.

“While servicemembers and their families may have access to government food assistance, their ability to qualify can vary by program and location, forcing servicemembers to seek charitable food assistance or limit the ability to eat healthy or nutritious food,” House appropriators wrote. “The coronavirus pandemic and its economic repercussions have only magnified the problem of food insecurity experienced by military families.”

“For National Guard and reserve personnel, the past year of near constant deployments to respond to the pandemic, civil unrest, and natural disasters has exacerbated the problem of food insecurity,” the House appropriators wrote.

One must describe how a future crisis, such as another pandemic, could exacerbate the problem and what the Defense Department might do to ameliorate it.

The other is a report on the prevalence of food insecurity in the military, including data on servicemembers’ use of federal nutrition programs, steps the Pentagon is taking to improve the situation and the effects on military recruitment and readiness.

However, two years ago — in the fiscal 2020 NDAA — Congress already required the Pentagon to report on the extent of food insecurity in the ranks, including how many servicemembers or their dependents are receiving nutrition aid, eating reduced price school meals or using food banks.

The report was due in May 2020 but has yet to arrive, aides have said.

The House Appropriations Committee report requested that the NDAA-required assessment be provided not just to the Armed Services Committee but also to appropriators.

Five years ago, the Government Accountability Office recommended that the Pentagon start collecting more and better data on the problem. Defense Department officials later told GAO that Pentagon figures showed only a “very low percentage” of troops were having trouble feeding their families.

Senate appropriators, in their new report, seemed to take issue with that conclusion.

The Senate report said lawmakers are concerned by the Pentagon’s “lack of data” on the problem and “the apparent disparity between Department of Defense data, as characterized by senior leaders, and the findings of assistance organizations and polling experts.”

A six-question survey written by the Department of Agriculture is the standard way of reckoning whether someone has adequate access to nutrition. The survey questions how often in the last year a person has not eaten enough, not eaten a balanced meal or gone hungry for lack of money.

If a respondent answers enough questions in the affirmative, the person is deemed to be suffering from food insecurity or, at the extreme end of the scale, hunger.

The statistic indicating that one in five military families is food insecure today comes from a 2021 survey by the Military Family Advisory Network. In that study — and in a 2019 survey by the same group that had put the number at one in eight families — respondents were drawn from the entire military community. Nearly half those questioned were not currently serving but were veterans, retirees or spouses.

Regardless, in the 2019 survey, researchers broke out just the answers provided by active-duty personnel and found that 15 percent of them were food insecure — and the majority of that group also qualified as hungry.

And, by all accounts, the pandemic has made the problem worse in the two years since then.

If accurate, that suggests that food insecurity is a massive problem in the U.S. military. Nearly 1.4 million people serve in the active-duty military services. Fifteen percent of that total would be over 200,000 people.

Even if that figure were to be seen as overstated by a factor of 10, then some 20,000 servicemembers, not to mention dependents, have trouble putting food on the table — as compared to the 500 families aided by the Senate bill and 3,000 by the House bill, according to CBO’s reckoning.

Shelley Kimball, director of research at the Military Family Advisory Network, said the survey is not the only source of information about the problem.

“We host food distribution events throughout the year for military families, and we have wait lists from families who want to participate,” Kimball said. “We see the need with our own eyes.”

Protas of the MAZON group says the call for more studies should not substitute for action.

“How many hungry military families are acceptable?” he asked.