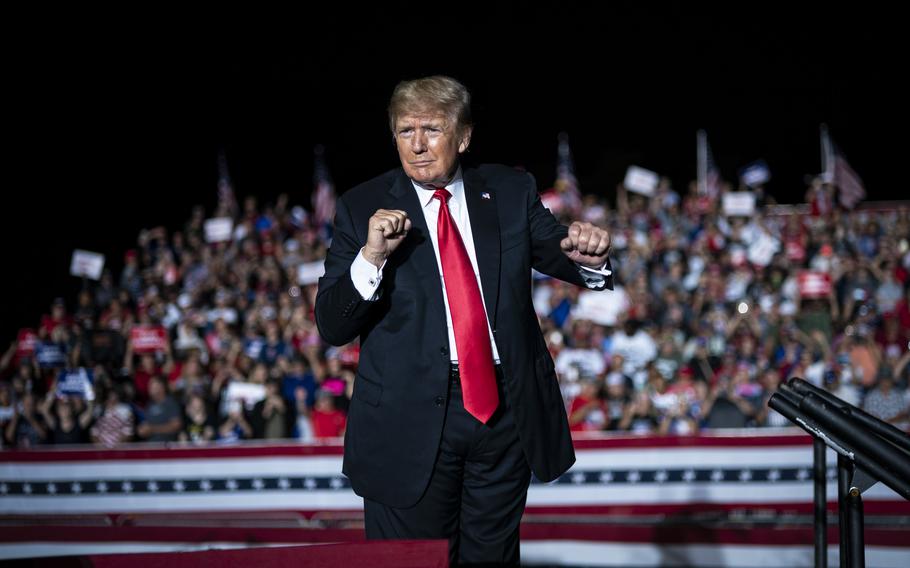 Former president Donald Trump was questioned for four and a half hours Monday by lawyers for a group of protesters who have sued him, alleging that Trump’s security guards assaulted them in 2015, one of the lawyers said.

Trump’s testimony was recorded on video so that it could be played at a trial in the suit. That arrangement allowed Trump to avoid testifying in person.

“We can report at this time that Donald John Trump sat for approximately four and half hours under oath and answered questions concerning the events that occurred outside of Trump Tower on September 3, 2015,” Benjamin Dictor, an attorney for the four protesters, said in a written statement.

In a statement, Trump denied the protesters’ claims and said he was happy to testify.

“After years of litigation, I was pleased to have had the opportunity to tell my side of this ridiculous story,” he said in the statement.

Since leaving the White House, Trump has faced a raft of civil lawsuits and state-level investigations. Some relate to his actions on Jan. 6, when his supporters stormed the Capitol. Others focus on his actions before taking office. Many of those cases were delayed during Trump’s term, as he insisted that the presidency shielded him from state-court procedures and state investigations.

In this case, the protesters filed their lawsuit in 2015, saying that Trump’s then-bodyguard Keith Schiller and other security guards had shoved them during a protest against Trump’s rhetoric about Latinos. (Schiller, who later became a White House official, has said he struck a protester only after the man grabbed him).

Trump was ordered to sit for a deposition in 2019, but his objections about presidential privilege delayed the questioning until Monday.

Trump may also sit for questioning this year in a separate state-court lawsuit, this one filed by former “Apprentice” contestant Summer Zervos.

Zervos sued Trump alleging defamation in 2017, after Trump denied Zervos’s allegation that he had sexually assaulted her. That case had also been slowed by Trump’s assertions of presidential privilege, but he is now expected to be deposed before Dec. 23, according to a recent court hearing.

On Monday, an attorney for Trump also sought permission from a New York judge to file a counterclaim against Zervos under the state’s newly updated version of a law that is meant to discourage frivolous lawsuits that chill free speech.

But such anti-SLAPP (for “strategic lawsuit against public participation”) laws, as they are known, “do not provide a license for Mr. Trump to avoid accountability for his words,” said Zervos’s attorneys Beth Wilkinson and Moira Penza said in a statement, which also called the proposed move by Trump’s team a delay tactic.