US to restore full pension of FBI official fired under Trump 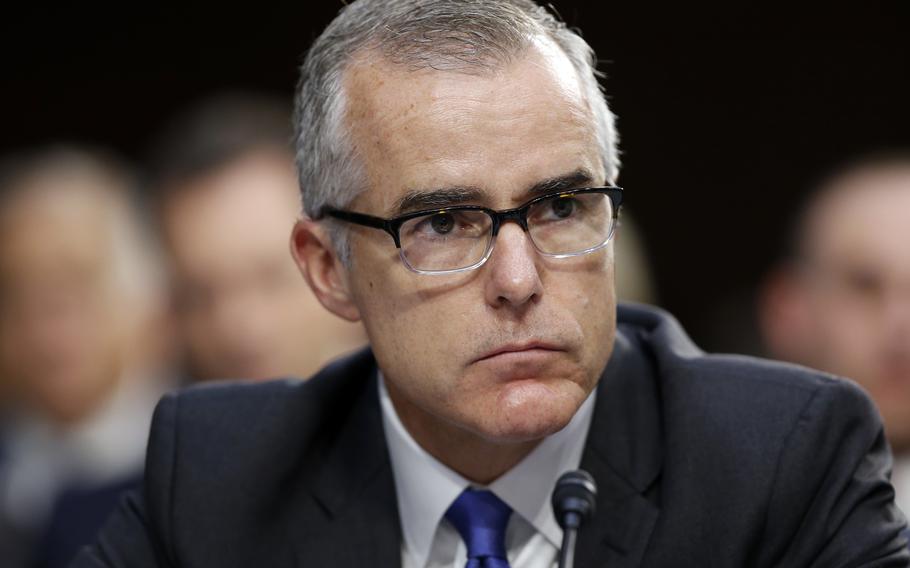 WASHINGTON — Former FBI Deputy Director Andrew McCabe has won back his full pension as part of a settlement of his lawsuit arising from his firing during the Trump administration more than three years ago, his lawyers announced Thursday.

McCabe, a frequent target of then-President Donald Trump’s ire, was fired in March 2018 after the Justice Department’s inspector general concluded he had authorized the release of information to a newspaper reporter and then misled internal investigators about his role in the leak. The termination by Jeff Sessions, the attorney general at the time, came hours before McCabe was due to retire, denying the FBI official his pension.

The settlement agreement vacates that decision, expunges from his personnel folder references to having been fired and entitles McCabe, who joined the FBI in 1996, to his full pension.

“Politics should never play a role in the fair administration of justice and civil service personnel decisions,” McCabe said in a statement. He added that he hopes “this result encourages the men and women of the FBI to continue to protect the American people by standing up for the truth and doing their jobs without fear of political retaliation.”

McCabe has denied intentionally deceiving anyone, was never criminally charged and has blasted his firing as politically motivated and part of the Trump administration’s “ongoing war on the FBI.” Trump, who at the time was relentlessly railing against the FBI for its investigation into ties between Russia and his 2016 presidential campaign, called the termination a “great day for Democracy” shortly after it was announced.

McCabe sued in 2019, saying his firing was part of an effort by Trump to purge the FBI of officials he perceived as disloyal. McCabe had become acting director of the FBI in May 2017 after Trump fired James Comey amid the bureau’s Russia investigation, a termination that was examined by special counsel Robert Mueller for potential obstruction of justice.

As part of the settlement, the federal government has agreed to rescind and vacate McCabe’s firing, deem him as having retired in good standing, restore his full retirement pension and record him as having been employed continuously between 1996 until his actual retirement day.

He is also entitled to other benefits afforded to retiring FBI senior executives, including special cufflinks and “official FBI credentials, badge, and time-in-service award keys mounted in the format typically provided to retiring FBI Deputy Directors” and other senior officials, according to the settlement.

“For 140 years, civil servants like Andrew McCabe have been the federal government’s backbone, pledging their loyalty to the Constitution rather than to any politician or political party,” Murad Hussain, a lawyer for McCabe, said in a statement.

“This settlement and the district court’s rulings make clear that attempts to corrupt the federal workforce through partisan intimidation and improper political influence will not go unanswered,” he added.

A spokesperson for the Justice Department, which did not admit any wrongdoing as part of the settlement, declined to comment.

Though the settlement restores McCabe’s pension, it does not undo the inspector general’s finding that McCabe displayed a lack of candor under questioning from investigators.