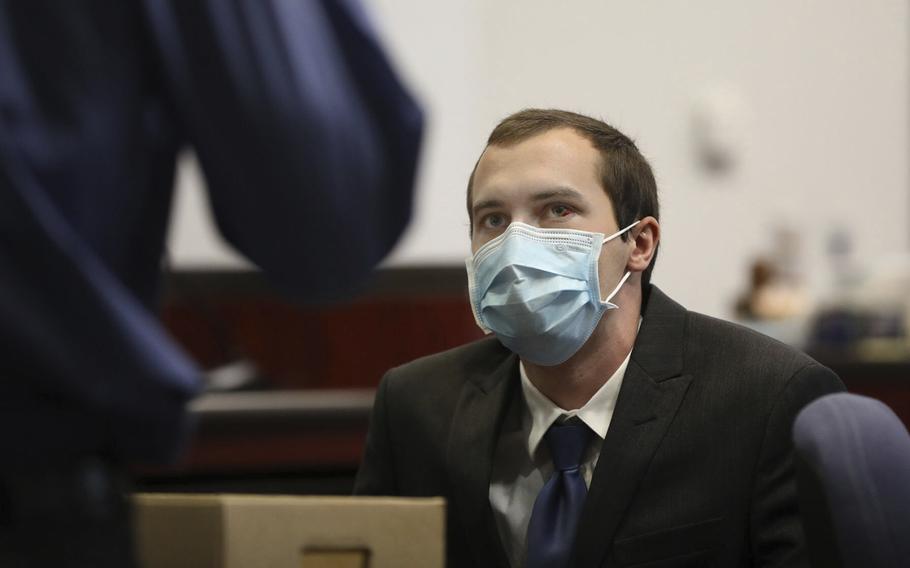 Mark Gooch, 22, awaits opening statements in his trial at the Coconino County Superior Court in Flagstaff, Ariz., on Friday, Sept. 24, 2021. Gooch is charged with first-degree murder in the death of Sasha Krause, 27, in early 2020. (Jake Bacon, Arizona Daily Sun/AP)

She wrote about her purpose in life, her unwavering faith, the possibility of dying young and the glories of heaven — all of which have taken on new meaning to her family after her death last year, said her father, Bob Krause.

On Wednesday, a jury in Arizona found U.S. Air Force airman Mark Gooch guilty of kidnapping and first-degree murder in Krause’s killing. The two didn’t know each other and lived hundreds of miles apart but shared an upbringing in the Mennonite religion. Krause committed to the church, while Gooch did not.

Krause, 27, was last seen in January 2020 at the church in her tight-knit Mennonite community outside Farmington, in northwestern New Mexico, where women wear head coverings and long dresses and men don plain, button-up shirts. She had been gathering material for Sunday school.

Her body was found more than a month later in a forest clearing outside Flagstaff, Arizona, nearly 300 miles away. A camper collecting firewood spotted Krause face-down among pine needles near a national monument. Krause’s wrists were bound, and she had been shot in the head.

Gooch was raised in a Mennonite community in Wisconsin, where he worked on his family’s dairy farm and went to school through eighth grade. He later rejected the religion and joined the U.S. Air Force.

During his trial, half the courtroom was filled at times with Krause’s parents and others who shared in the conservative Christian faith, including the general manager of the Farmington publishing ministry where Krause worked. Paul Kaufman said Wednesday his heart goes out to both families, and the community doesn’t want to be vindictive toward Gooch.

“We desire his complete repentance, that he would turn from darkness to light,” Kaufman said.

Gooch, 22, faces up to life in prison at his sentencing, set for Nov. 24. Coconino County Attorney William Ring said his office will seek swift justice and thanked the jury for its service.

“Through some hard work, the community will be a safer place tonight,” he said in a statement.

Jurors heard 10 days of testimony from those who knew Krause and investigated her disappearance. They heard from ballistics experts who disagreed on whether the bullet taken from her skull was fired from a .22-caliber rifle Gooch owned. They heard from Gooch’s father, Jim, but they did not hear from the defendant.

Gooch showed no emotion when the verdict was announced. He stood in a military stance, with one hand resting over the other behind his back. As he left the courtroom, he looked at two family members who sat behind him. They declined to comment.

Gooch’s attorney, Bruce Griffen, tried to raise reasonable doubt among the jury by pointing to a lack of forensic evidence and to testimony about another car seen in the Mennonite community the day Krause went missing. He said Gooch was peaceful and volunteered information to a detective who interviewed him at Luke Air Force Base in metropolitan Phoenix, where he was stationed.

Sean Clements, a spokesman for the air base, said proceedings would begin soon to discharge Gooch from the Air Force following his conviction.

Jim Gooch testified that his son left the Mennonite faith and joined the military because he lacked a converted heart — words that prosecutor Ammon Barker drew on during closing arguments.

“What the scripture says is you turn from darkness to light,” Jim Gooch said. “What it says is you’ve decided to follow the lord with your entire heart and with the tenets of the scripture would call for.”

Krause taught school for six years at a Grandview, Texas, Mennonite community before moving to Farmington less than two years before she died. She was a person of deep faith who found great joy in working with children and learning, her father told The Associated Press on Wednesday.

“She was always studying something, especially languages, which came almost naturally to her,” he said. “She loved words: big words, funny words, poetry, classics and nursery stories — very word-oriented but not garrulous.”

The last stanza in a poem she wrote titled “I do not walk alone” perhaps was about passing in old age, he said, but “it is amazingly apt to what seems to have happened to her.”

“When stress + fear shall take their toll

When cruel tyrants grasp my soul

When death + all its horrors roll

I shall not walk alone”

For Sasha Krause’s headstone, her family chose the words: “She did not walk alone.”

No one saw Krause being taken from the community or killed. When the camper found her body near Sunset Crater Volcano National Monument, her wrists were bound with duct tape, she had suffered blunt force trauma, and she had a gunshot wound in the back of her head.

Authorities used cellphone and financial records, and surveillance video to tie Gooch to the crimes. Barker said Gooch was driven by a resentment for Mennonites, partly displayed through text messages with his brothers.

Authorities found inconsistencies in Gooch’s story when he talked to a sheriff’s detective shortly before he was arrested in April 2020. They said Gooch’s cellphone was the only device that communicated with the same cell sites as Krause’s phone before her signal dropped off west of Farmington.

Coconino County Sheriff’s Detective Lauren Nagele said the hundreds of hours spent on the investigation and the jury’s decision brought justice for Krause and her family.

“The verdict unfortunately cannot bring Sasha back, but it does protect our society by preventing Mark Gooch from ever murdering another innocent person,” she said in a statement.

The San Juan County Sheriff’s Office in New Mexico, which investigated her disappearance, said it will pursue a separate kidnapping charge against Gooch since the case originated in that state.