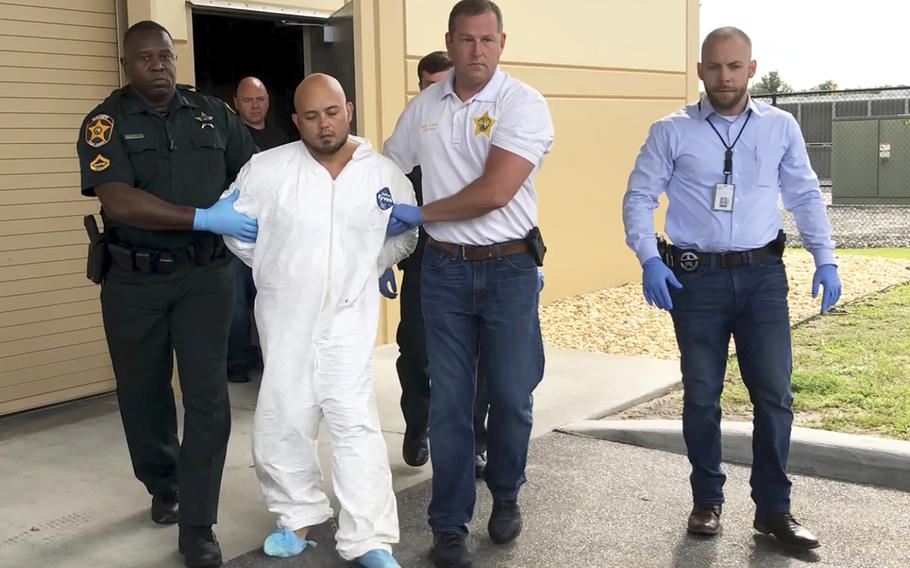 ST. PETERSBURG, Fla. — An insanity defense is being considered for a Marine veteran accused of killing four members of a Florida family under the delusion they were part of a child sex trafficking ring.

A lawyer for Bryan Riley told a judge Monday more time is needed to gather details of Riley's past and hire mental health experts before a decision is made on his defense.

"We are looking at a defense of insanity as an option," Assistant Public Defender Jane McNeill said at a hearing at which she asked for a year's delay in the case. "There is so much work that must be done before we can make such a determination."

Riley, 33, could face the death penalty if convicted in the Sept. 5 shooting rampage at a home in Lakeland, Fla., in which four people died including an infant in his mother's arms. Riley faces 22 charges including murder, arson, kidnapping, burglary and animal cruelty for killing the family dog. An 11-year-old girl survived despite several gunshot wounds.

Investigators say Riley told them he believed the family — whom he encountered randomly — was involved in child sex trafficking and that he had been told by God to rescue a purported child victim named "Amber." There was no child by that name at the home, but Riley had seen the girl before the shooting outside the family home.

Prosecutors asked Polk County Circuit Judge Jalal Harb for no more than 45 days in extra time for the defense. Under Florida law, notice of an insanity defense must be provided within 15 days of arraignment unless a judge grants an extension — and Riley's arraignment is Tuesday.

"The defense will have plenty of time to do what they need to do," said Assistant State Attorney Lauren Perry. "A case put on by the state of Florida rarely gets better with time."

Harb did not immediately rule and said Riley's arraignment, when he would formally enter a plea, will go forward Tuesday.

"There is a lot to digest," the judge said.

If Riley's lawyers opt for an insanity defense, they would need to show Riley was so seriously afflicted by a mental defect at the time of the slayings that he did not know what he was doing or could not tell right from wrong. That's different from being found competent to stand trial, said former federal prosecutor David S. Weinstein.

"It's not impossible. It's difficult, but not impossible," said Weinstein, a Miami defense lawyer not connected to the Riley case.

If jurors found Riley not guilty by reason of insanity, the judge would then decide whether he should be committed to a mental hospital, provided other forms of treatment or simply released.

Riley appeared via video link at the hearing, wearing an orange jail jumpsuit and a mask. He did not speak.

Officials say Riley, who served with the Marines in Iran and Afghanistan, had three weapons with him and fired at least 100 shots in the main home and a smaller one in back where Catherine Delgado, 62, was the first to be killed.

The victims are Justice Gleason, 40; his 33-year-old girlfriend, Theresa Lanham; their baby boy, Jody, who was born in May; and Delgado, who was Lanham's mother and owned the property. Gleason's daughter survived.