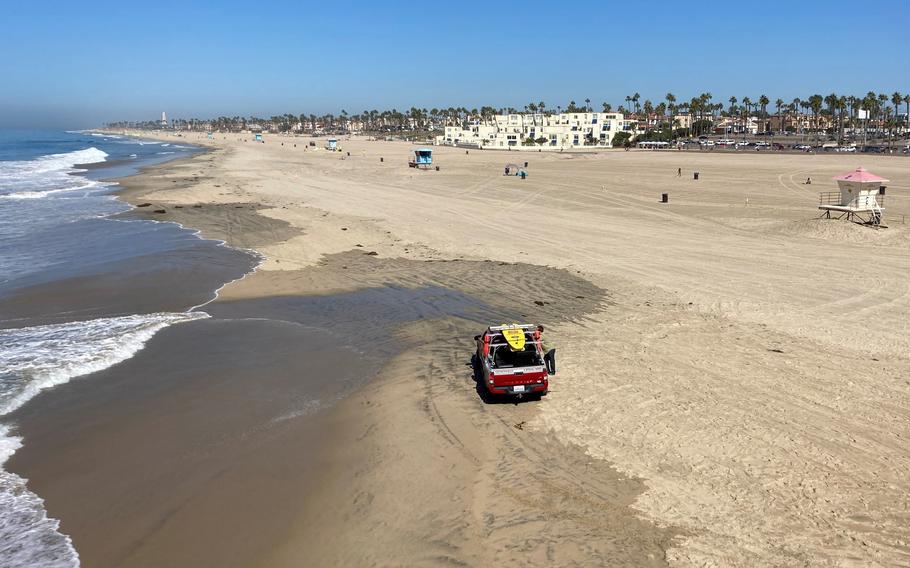 HUNTINGTON BEACH, Calif. — Surfers and swimmers returned to the waves Monday at a popular Southern California beach that was shut for more than a week after an undersea pipeline leaked crude oil into the ocean.

The reopening of Huntington Beach — dubbed "Surf City USA" — came far sooner than many expected after a putrid smell blanketed the coast and blobs of crude began washing ashore.

City and state park officials decided to reopen the shoreline in Huntington Beach after water quality tests revealed no detectable levels of oil associated toxins in the ocean. That was good enough for Andrew Boyack, a 54-year-old commercial photographer, who usually surfs the waves in his hometown three or four times a week but has stayed out since the spill.

"There's lots of guys out so I figure it's probably alright, and I guess they tested it," Boyack said, while rinsing off at an outdoor beach shower.

"It's exercise. It's like, you know, if somebody was a jogger or something. We surf every morning."

This surf-loving city of 200,000 people and nearby coastal communities have been reeling from the spill. The ocean has been closed, a popular air show canceled, fisheries shuttered and local shops have been walloped. The environmental impact on sensitive wetland habitats has been less severe than initially feared, but advocates say they're concerned about the long-term impacts of the spill.

Coast Guard officials said a pipeline owned by Houston-based Amplify Energy that shuttles crude from offshore platforms to the coast leaked at least about 25,000 gallons and no more than 132,000 gallons of crude oil into the ocean.

The spill was confirmed on Oct. 2, a day after residents reported a petroleum smell in the area. Officials have said the cause remains under investigation and they believe the pipeline was likely damaged by a ship's anchor several months to a year before it ruptured.

On an overcast Monday, a handful of people played volleyball and residents walked, jogged and biked on a path along the beach. Surfers in wetsuits jogged to the shore carrying their boards, eager to return to the waves, some after being shooed away over the weekend by lifeguards on jet skis.

Still, there were far fewer people in the ocean than usual, said Sean Rinehart, a 49-year-old surf instructor and chef from Huntington Beach. Rinehart headed out to surf but said he decided not to go in after the smell of dead fish near the pier gave him pause. The last time he surfed was Oct. 2, when he said he wound up in an oil slick. His skin, even now, is still itching, he said.

In Huntington Beach, shops selling everything from bikinis to stars-and-stripes boogie boards to sand toys and fishing gear have taken an economic hit since the spill. Shop owners hope business will bounce back quickly but fear it could take longer.

Other nearby beaches remain closed. The shoreline in Newport Beach to the south was closed on Monday pending the results of water quality testing, said John Pope, a city spokesman.

In Huntington Beach, the sand looked clear near the pier and there was no smell of oil. Workers in hazmat suits tasked with removing oily blobs continued to comb the sand.

Matt Harty, a 61-year-old retired construction supervisor from the nearby community of Seal Beach, said he was glad to return to the waves in Huntington Beach with other early morning surfers. He said he's seen oil spills before and this one didn't seem that bad, and in fact, the beach looks great.

"This is the cleanest I've seen the beach in years, right, because there's been nobody here for a week," Harty said. "I think they cleaned it up really well."