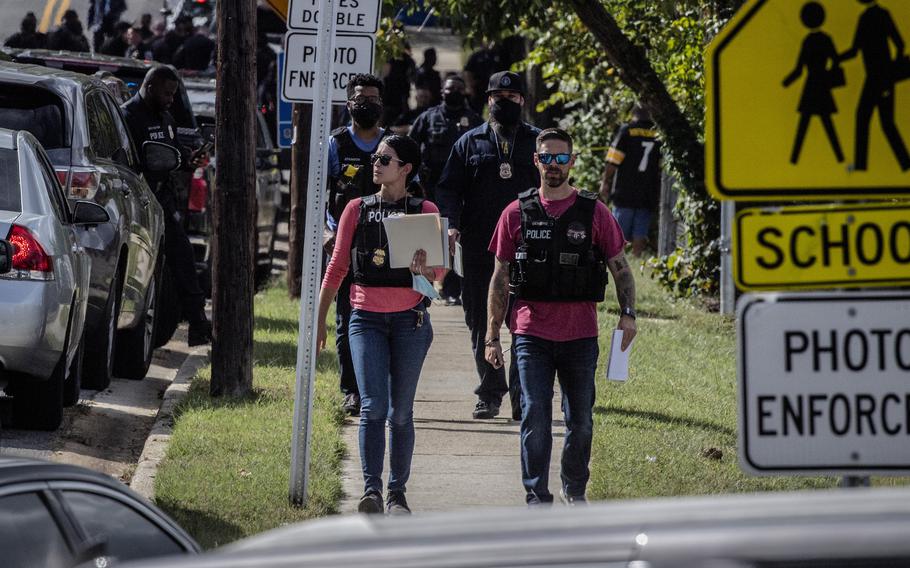 Police arrive at the scene of a shooting at a senior housing apartment on Friday, Oct. 8, 2021 in Capitol Heights, Md. (Bill O’Leary, The Washington Post/AP)

CAPITOL HEIGHTS, Md. — Two staff members were fatally shot Friday at a Maryland apartment complex for seniors just outside of Washington, D.C., and a suspect was taken into custody, police said.

The shooting happened shortly after 9 a.m. at Gateway Village in Capitol Heights, Prince George's County and Capitol Heights police said. Both victims were women — one found in a hallway and another in an office, they said.

A resident who identified himself only as Donald said the shooter is his friend and lived in the complex. He said the man was fed up with how residents have been treated.

"He told me, 'Don, nobody is standing up for these seniors. I can't take it no more. I've got to do something.' And obviously what he chose to do is wrong, but he did something," the resident told reporters.

Gateway Village is one of 310 communities in 25 states run by National Church Residences, which describes itself as "the nation's largest provider of affordable senior housing and services." Its website says the apartment complex about a half-mile (.8 km) east of the District of Columbia includes studio and one-bedroom units for "seniors age 62+." A county website describes the property as subsidized government housing for seniors with low incomes.

"We are proud of the heroic and swift actions of our staff to ensure that our residents were protected and kept safe. Our hearts go out to the families of our two team members who lost their lives in this tragic and unfortunate incident," her statement said.

Capitol Heights Police Chief Mark Cummings said the facility's residents can come and go without staff controlling whether they carry a gun.

"It's an open facility. It's a residence. So they don't manage what weapons or things are brought in," Cummings said.

Police said the homicide investigation would include any questions about the management of the facility.

Cummings said he wasn't aware of any significant problems at the complex leading up to the shooting.

"We don't get a lot of calls to this facility. My officers actually patrol that area very much. We go in and talk to the residents. So we're not aware of any ongoing situations," Cummings said.

The shooter prepared to surrender even before police arrived, Donald said, laying flat with his arms spread in a hallway, with the weapon pushed about six feet (two meters) away from him. He said his friend told him to tell police that he wasn't a threat, and that he knew he would be taken away.

County Executive Angela D. Alsobrooks said the priority now is caring for the approximately 89 residents of the facility, making sure they have medicine and food after many were evacuated.

"We are absolutely devastated about the loss of life today and if you think about it, the depravity. There is no good explanation for why this kind of occurrence happens again and again," Alsobrooks said.