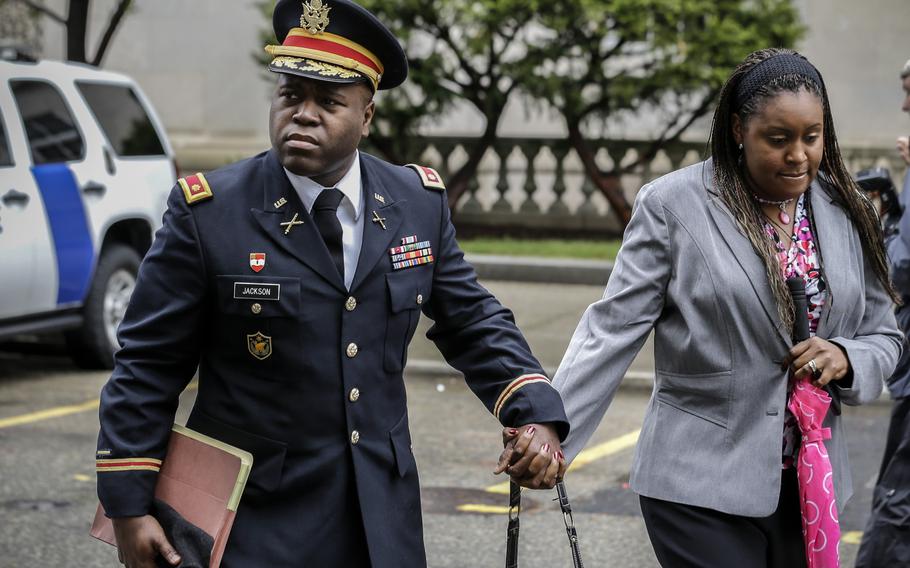 NEWARK, N.J. — A former Army major and his wife who prosecutors said routinely beat their young foster children and denied them food and water as punishment avoided more prison time Wednesday, the third sentencing in the long-running case after federal appeals courts struck down the first two for being too lenient.

U.S. District Judge Katharine Hayden, the same jurist who presided over John and Carolyn Jackson’s 2015 trial and sentenced them two previous times, concluded the day-long sentencing by reasoning that imposing more prison time “is more punishment than is necessary.”

In 2015, the U.S. attorney’s office sought prison sentences of 15 years or more after the couple was convicted on multiple counts of child endangerment. After the first sentencing was struck down, Hayden extended their sentences in 2018, but that was rejected on appeal as well.

On Wednesday, prosecutors had recommended a sentencing range of between nine and 11 years. They registered an objection to Hayden’s ruling, calling the sentences insufficient and accusing her of not following guidelines set by the appeals court.

Sentencing in the case has been complicated by the fact that the trial took place in federal court since the Jacksons lived at Picatinny Arsenal, a New Jersey military facility, during the time in question. Because child endangerment is not a federal crime, state endangerment charges were merged into the federal indictment to go along with a conspiracy count and two federal assault counts.

The Jacksons were acquitted of the assault counts, but prosecutors argued Hayden should sentence them under assault guidelines anyway because the nature of the child endangerment counts made them “sufficiently analogous” to assault. Defense attorneys argued prosecutors didn’t connect specific acts by the Jacksons to injuries the children suffered.

On Wednesday, Hayden largely appeared unswayed by the prosecution’s arguments, declining to draw direct lines between most of the couple’s actions — such as administering hot sauce — and the children’s injuries. She also cast doubt on trial testimony by the Jacksons’ biological son about witnessing the abuse, which was a key part of the prosecution’s case.

The Jacksons made “misguided and harmful choices,” Hayden said, but added she didn’t believe the evidence showed “that the Jackson are monsters.”

The Jacksons’ trial produced testimony that their three foster children suffered broken bones and were severely underweight and had other health problems when they were removed from the home in 2010. The couple’s biological son testified the couple forced the children to eat hot pepper flakes and drink hot sauce as punishment.

A fourth foster child in their care died, but the Jacksons weren’t charged with his death. At trial, the Jacksons’ lawyers argued that the children had pre-existing health problems, and said the couple’s child-rearing methods may have been unconventional but weren’t criminal.