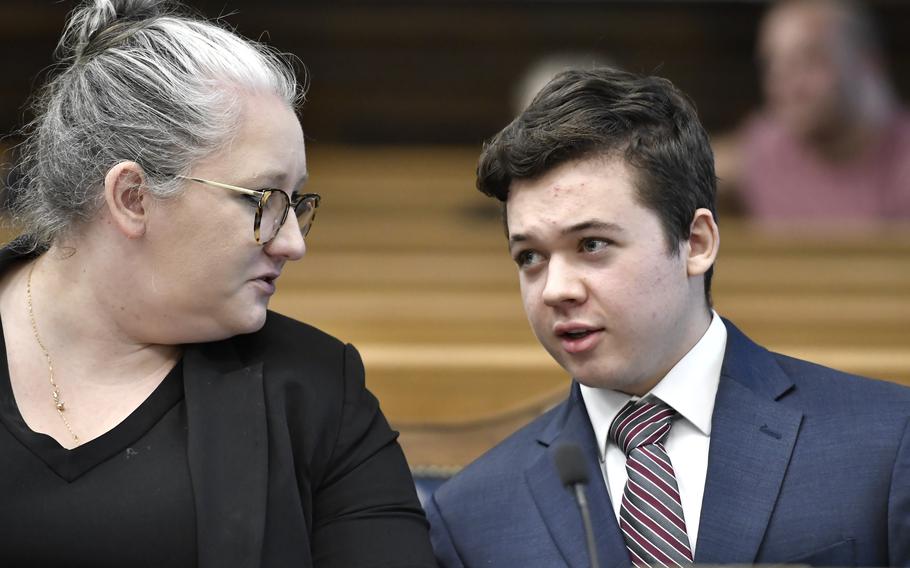 Kyle Rittenhouse, right, accused of shooting three people during a protest against police brutality in Wisconsin last year, speaks with one of his attorneys, Natalie Wisco, during a motion hearing, Tuesday, Oct. 5, 2021, in Kenosha, Wis. (Sean Krajacic, The Kenosha News, pool/AP)

MADISON, Wis. — A judge refused to dismiss a weapons charge Tuesday against an Illinois man accused of shooting three people during a protest against police brutality in Wisconsin last year.

Kyle Rittenhouse, of Antioch, Illinois, shot and killed Joseph Rosenbaum and Anthony Huber and wounded Gaige Grosskreutz during the protest in Kenosha. Prosecutors charged Rittenhouse, who was 17 at the time of the protest, with multiple counts, including homicide and being a minor in possession of a firearm. His trial is set to begin Nov. 1.

Rittenhouse's attorneys have argued that he fired in self-defense after Rosenbaum, Huber and Grosskreutz attacked him. They asked Kenosha County Circuit Judge Bruce Schroeder to dismiss the weapon possession charge during a hearing Tuesday.

Corey Chirafisi, one of Rittenhouse's attorneys, argued that the statute only prohibits minors from possessing short-barreled rifles. Rittenhouse used an AR-style semiautomatic rifle with a 16-inch barrel the night of the shootings, according to Chirafisi.

The only other prohibitions on minors possessing firearms lie in the state's hunting statutes, which state that children under 12 can't hunt with guns. That doesn't apply to Rittenhouse because he was 17 on the night of the shootings, Chirafisi said.

Assistant District Attorney Thomas Binger countered that the Legislature clearly intended to bar anyone under 18 from "running around with a dangerous weapon" and that the hunting statutes don't apply because Rittenhouse wasn't hunting Kenosha's streets on the night of the protest.

Schroeder sided with Binger, but he said he might revisit the question later because the statutes aren't clear.

Binger also asked Schroeder to order reporters not to broadcast witnesses' images during what will be a high-profile trial, saying at least some of them are afraid for their safety. He didn't say which witnesses feel unsafe or whether they've actually been threatened.

Rittenhouse attorney Mark Richards said he didn't know which fearful witnesses the prosecution was referring to, but that one prosecution witness has boasted about being subpoenaed on his social media accounts.

Schroeder said he wasn't sure if he has the authority to censor the media and that he's presided over other cases that he described as more "tense" than the Rittenhouse proceedings.

The attorneys also sparred over whether to allow John Black, an expert on the use of force by police, testify for the defense at the trial. Binger maintained that it wasn't necessary and that jurors could decide for themselves whether Rittenhouse's actions were reasonable. Richards argued that Black could help jurors get to the facts.

Schroeder allowed Black to testify during the hearing to get an idea of what he would present at the trial. Black asserted that Rittenhouse maintained control of his gun at all times, tried to move away from Rosenbaum, Huber and Grosskreutz, and only fired when he was attacked. He noted that Huber hit Rittenhouse with a skateboard and Grosskreutz approached him with a pistol in his hand.

Prosecutors also were looking for permission to introduce a video showing Rittenhouse saying he'd like to shoot some men he thought were shoplifting from a pharmacy 15 days before the protest. Schroeder said last month that he was leaning toward excluding it. It wasn't clear if he would rule on that request Tuesday.

Schroeder last month denied both sides' request to send questionnaires to potential jurors to probe biases. The judge wrote in a letter to the attorneys that he's afraid people won't fill them out and recipients would discuss the case with family members, friends and co-workers.

"That may trigger even more conversations about the case, with consequent opinion formation," Schroeder said.

Kenosha was in the throes of several nights of chaotic protests in August 2020 after a white police officer shot Jacob Blake, who is Black, during a domestic disturbance, leaving Blake paralyzed from the waist down. Rittenhouse, now 18, traveled to the city in response to social media posts asking for help defending city businesses.

Many conservatives flocked to support Rittenhouse, calling him a patriot for seeking to stop violent protests, making him a symbol for gun rights and raising $2 million for his bail. Others, including some liberals and activists, portrayed him as a domestic terrorist and said he made a volatile situation worse by bringing a rifle to the streets of Kenosha.