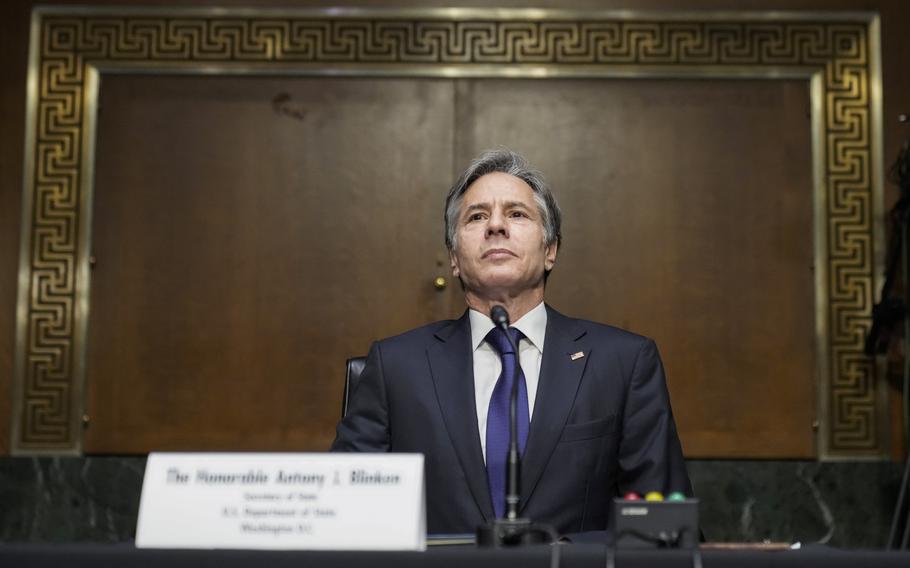 Secretary of State Antony Blinken listens during a Senate Foreign Relations Committee hearing, Tuesday, Sept. 14, 2021, on Capitol Hill in Washington. Blinken was questioned about the Biden administration's handling of the U.S. withdraw from Afghanistan. (Drew Angerer/Pool via AP)

WASHINGTON — Secretary of State Antony Blinken on Tuesday sought to parry bipartisan congressional criticism of the Biden administration's Afghanistan withdrawal, as new intelligence estimates warned that al-Qaida could soon again use Afghan soil to plot attacks on the United States.

Blinken had mixed results in attempting to face down a second day of tough congressional questioning, this time from the Senate Foreign Relations Committee. As a day earlier before the House Foreign Affairs Committee, he was assailed by Democratic and Republican lawmakers alike over the administration's preparation for and handling of the pullout.

Even lawmakers sympathetic to President Joe Biden's decision to end America's longest-running war by withdrawing from Afghanistan after 20 years expressed disappointment and concern about the large number of Americans, green card holders and at-risk Afghans left behind in the chaotic and hasty evacuation from Kabul.

And, as Blinken testified just three days after the 20th anniversary of the Sept. 11, 2001, terrorist attacks that led to the U.S. invasion of Afghanistan, intelligence officials presented a bleak assessment that al-Qaida could begin to use Afghan territory to threaten America within one to two years.

"The execution of the U.S. withdrawal was clearly and fatally flawed," said committee chairman Sen. Bob Menendez, D-N.J., who has been generally supportive of Biden's foreign policy but has taken issue with several of its aspects, including Afghanistan.

"This committee expects to receive a full explanation of this administration's decisions on Afghanistan since coming into office last January," he said. "There has to be accountability."

"The withdrawal was a dismal failure," said Sen. Jim Risch of Idaho, the top Republican on the committee. He and virtually all of his Republican colleagues accused the administration of "ineptitude" that has cost the United States international credibility, led to a deadly attack on U.S. troops and Afghan civilians at the Kabul airport and left many in the lurch.

"There's not enough lipstick in the world to put on this pig to make it look any different than what it actually is," Risch said.

Much as he did on Monday at the often contentious hearing in the House, Blinken tried to deflect the criticism and maintained the administration had done the best it could under extremely trying and chaotic circumstances.

Blinken again blamed the Trump administration for its February 2020 peace deal with the Taliban that he said had tied Biden's hands, as well as the quick and unexpected collapse of the Afghan government and security forces that led to the Taliban takeover on Aug. 15.

"Even the most pessimistic assessments did not predict that government forces in Kabul would collapse while U.S. forces remained," he said. "They were focused on what would happen after the United States withdrew, from September onward."

Blinken said the administration would hold the Taliban, which hosted and protected Osama bin Laden and top members of his al-Qaida network as they plotted the 9/11 strikes, to their promises not to allow Afghanistan to be used again as a base for terrorist attacks.

But as he spoke, U.S. intelligence officials said al-Qaida may be only 12 to 24 months from reconstituting itself in Afghanistan to pose a significant threat to the United States.

Lt. Gen. Scott Berrier, who leads the Defense Intelligence Agency, gave that estimate while speaking at the Intelligence & National Security Summit. Meanwhile, David Cohen, deputy director of the Central Intelligence Agency, said the U.S. already had detected "some of the indications of some potential movement of al-Qaida to Afghanistan.

Experts have long said the Taliban still maintains ties to al-Qaida, which took sanctuary in Afghanistan prior to 9/11. Although Blinken was not asked directly about the intelligence assessments, he said the Taliban had not fully severed its links with the group.

Texas Republican Sen. Ted Cruz, a vehement opponent of numerous Biden policies, called the withdrawal "the worst foreign policy catastrophe in a generation" and accused the administration of being naive in hoping the Taliban live up to their promises of moderation. "They don't want to be welcomed into the community of civilized nations," he said.

Sen. Marco Rubio, R-Fla., demanded to know how intelligence about the collapse of the Afghan government had been so wrong. He suggested not only that the wrong people were in charge of assessing the situation but that the policy had been incoherent and left the U.S. vulnerable to rivals.

"This was a failure of policy and planning," said Rubio, another frequent critic of Biden's. "I think China and Russia and Iran, they look at this botched withdrawal and what they see as incompetence that they think they might be able to exploit."

The State Department has come under heavy criticism from both sides for not doing enough and not acting quickly enough to get people out of the country after the Taliban took control of Kabul, cementing its hold on the country before the completion of the U.S. withdrawal on Aug. 30.

Blinken defended the withdrawal and the end of America's longest-running war as "the right thing to do" after 20 years. And, he noted that despite severe difficulties the U.S. and its allies had managed to evacuate some 124,000 people.

"The evacuation was an extraordinary effort — under the most difficult conditions imaginable — by our diplomats, military, and intelligence professionals," he said.

Even some Democrats, though, were unswayed.

Sen. Jeanne Shaheen of New Hampshire, the only woman on the committee, who has long fought for the U.S. to protect the advances made by Afghan women and girls, lamented the current situation and said presidents and lawmakers of both parties shared the blame for the situation.

"Let's stop with the hypocrisy of who's to blame, there are a lot of people to blame and we all share in it," she said, her voice rising as she took a pointed dig at former President Donald Trump and his second Secretary of State Mike Pompeo, who negotiated the 2020 peace deal with the Taliban separate from the Afghan government with no assurance that minority rights would be respected.

"I want to know where the outrage was when they were giving away the rights of women and girls," Shaheen said.

In response, Blinken said he would soon be appointing a senior official to oversee U.S. policy toward Afghan women and girls.