Out West, Biden points to wildfires to push for big rebuild 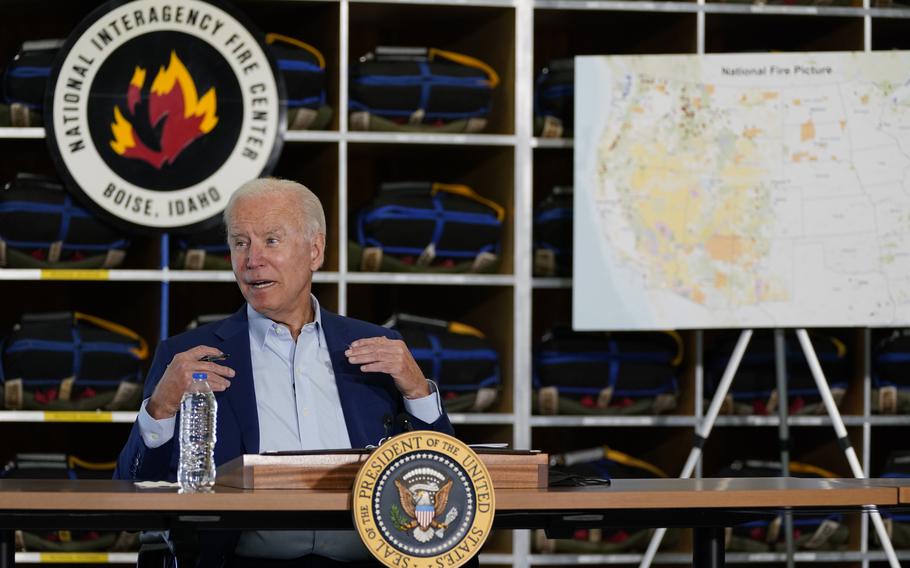 MATHER, Calif. — President Joe Biden on Monday used his first Western swing in office to hold out the wildfires burning across the region as an argument for his $3.5 trillion rebuilding plans, calling year-round fires and other extreme weather a climate change reality the nation can no longer ignore.

“We can’t ignore the reality that these wildfires are being supercharged by climate change,” Biden said, noting that catastrophic weather doesn’t strike based on partisan ideology. “It isn’t about red or blue states. It’s about fires. Just fires.”

With stops in Idaho and California, Biden sought to boost support for his big rebuilding plans, saying every dollar spent on “resilience” would save $6 in future costs. And he said the rebuilding must go beyond simply restoring damaged systems and instead ensure communities can withstand such crises. 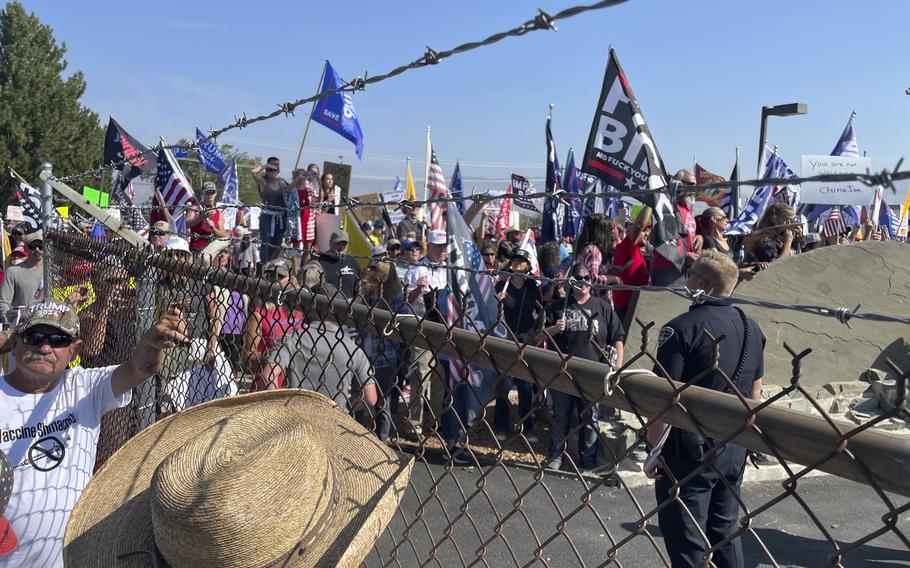 Protesters gather outside the National Interagency Fire Center in Boise, Idaho, for President Joe Biden's visit on Monday, Sept. 13, 2021. Biden's stop in Boise is part of a swing through Western states in which he will promote his administration's use of a wartime law to aid in wildfire preparedness. (Keith Ridler/AP)

“These fires are blinking ‘code red’ for our nation. They’re gaining frequency and ferocity,” Biden said after concluding an aerial tour of the Caldor Fire that threatened communities around Lake Tahoe. “We know what we have to do.”

The president’s two-day Western swing comes at a critical juncture for a central plank of his legislative agenda. Lawmakers on Capitol Hill are working to assemble details of the infrastructure-plus plan — and how to pay for it, a concern not just for Republicans. A key Democratic senator said Sunday that he will not vote for a package so large.

In California, Biden took an aerial tour of land charred by the Caldor Fire after getting a briefing from officials at the state emergency services office. Gov. Gavin Newsom, who faces a recall vote Tuesday, joined Biden for the briefing.

Newsom joked that the emergency center had become his office because fire season has “just kept going,” as he amplified Biden’s message.

“This has been a hard year and a half,” Newsom said.

During an earlier briefing in Boise at the National Interagency Fire Center, which coordinates the government’s wildfire response, Biden noted that wildfires start earlier every year and that this year they have scorched 5.4 million acres. “That’s larger than the entire state of New Jersey,” Biden said.

Biden, who visits Denver on Tuesday before returning to Washington, aimed to link the increasing frequency of wildfires, drought, floods and other extreme weather events to what he and scientists say is a need to invest billions in combating climate change, along with vastly expanding the nation’s social safety net.

The president argued for spending now to make the future effects of climate change less costly, as he did during recent stops in Louisiana, New York and New Jersey — all states that suffered millions of dollars in flood and other damage and scores of deaths after Hurricane Ida.

Biden also praised firefighters for the life-threatening risks they take, and discussed the administration’s recent use of a wartime law to boost supplies of firehoses from the U.S. Forest Service’s primary supplier, an Oklahoma City nonprofit called NewView Oklahoma.

In deep-red Idaho, several opposing groups leveraged Biden’s visit as a way to show resistance to his administration. GOP gubernatorial candidates, an anti-vaccine organization and a far-right group were among those urging people to turn out against the president.

More than 1,000 protesters did so, gathering in Boise before Biden arrived to express displeasure with his coronavirus plan, the election and other issues.

Chris Burns, a 62-year-old from Boise, said, “I’m against everything Biden is for.” Burns was especially displeased with a sweeping new vaccine mandate for 100 million people that Biden announced last week. “He’s acting like a dictator,” Burns said.

The White House is trying to turn the corner after a difficult month dominated by a chaotic and violent U.S. withdrawal from Afghanistan and the surging delta COVID-19 variant that have upended what the president had hoped would mark a summer in which the nation was finally freed from the coronavirus.

Biden acknowledged his polling numbers have dipped in recent weeks, but argued his agenda is “overwhelmingly popular” with the public. He said he expects his Republican opponents to attack him instead of debating him on the merits of his spending plan.

Besides the Republican opposition in Congress, Biden needs to overcome the skepticism of two key centrist Democrats in the closely divided Senate. Joe Manchin of West Virginia and Kyrsten Sinema of Arizona have expressed concerns about the size of the $3.5 trillion spending package.

Manchin said Sunday, “I cannot support $3.5 trillion,” citing his opposition to a proposed increase in the corporate tax rate from 21% to 28% and vast new social spending envisioned by the president. Manchin also complained about a process he said feels rushed.

In California, Biden appeared to respond to those concerned about the plan’s size, saying the cost “may be” as much as $3.5 trillion and would be spread out over 10 years, a period during which the economy is expected to grow.

The 100-member Senate is evenly split between Democrats and Republicans. Given solid GOP opposition, Biden’s plan cannot pass the Senate without Manchin or Sinema’s support.

The climate provisions in Biden’s plans include tax incentives for clean energy and electric vehicles, investments to transition the economy away from fossil fuels and toward renewable sources such as wind and solar power, and creation of a civilian climate corps.

The Biden administration in June laid out a strategy to deal with the growing wildfire threat, which included hiring more federal firefighters and implementing new technologies to detect and address fires quickly. Last month, the president approved a disaster declaration for California, providing federal aid for the counties affected by the Dixie and River fires. He issued another disaster declaration for the state just before Monday’s visit aimed at areas affected by the Caldor Fire.