NEW YORK — The foundation named after a firefighter who perished on Sept. 11 after running from Brooklyn to Manhattan in full gear held a ceremony in lower Manhattan on Sunday to honor those lost in the years since the attacks.

The event sponsored by the Tunnel to Towers Foundation featured the reading of names of first responders and others who spent time at Ground Zero after Sept. 11 and later succumbed to illnesses.

Among presenters Sunday was Mary Siller Scullin, sister of late firefighter Stephen Siller. Stephen Siller ran through the Battery Tunnel to the World Trade Center on Sept. 11 after the north and south towers were hit by planes.

"The Tunnel to Towers Foundation has promised never to forget the sacrifices made on 9/11 and all the sacrifices that have been made and continue to be made ever since," foundation CEO Frank Siller, Stephen's brother, told the gathering Sunday.

The foundation holds an annual 5K run and walk that retraces Stephen Siller's footsteps. The event, which raises money for wounded veterans and families of fallen first responders, was canceled last year due to the COVID-19 pandemic.

Thousands of people exposed to World Trade Center dust developed health problems in the years after the attacks, most commonly chronic nasal passage problems, shortness of breath and acid reflux disease. A smaller number have suffered from more serious problems, like lung disease. 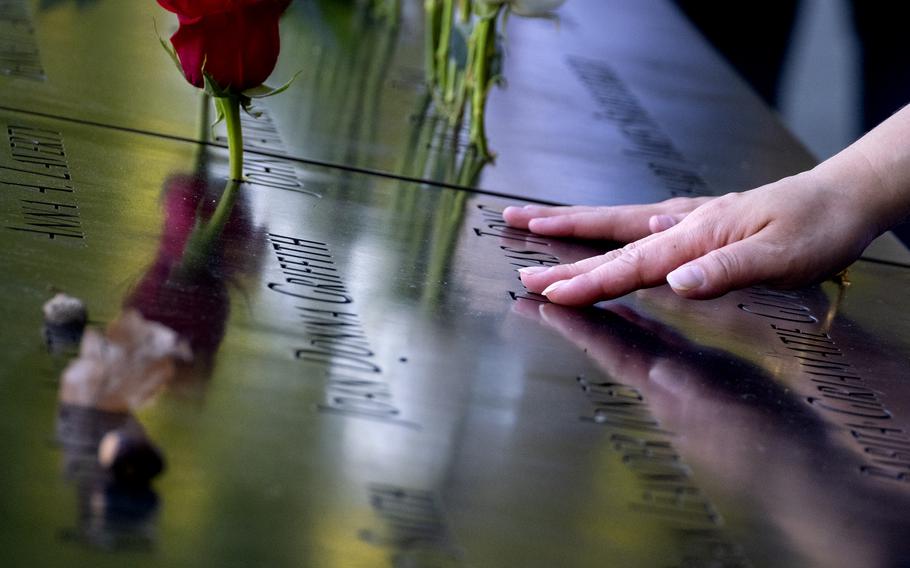 Hands touch the names of people who were killed during the attacks on the World Trade Center on Sept. 11, 2001, as families gather at the National September 11 Memorial in New York on the 20th anniversary of the attacks, Saturday, Sept. 11, 2021. (Craig Ruttle/Newsday via AP)