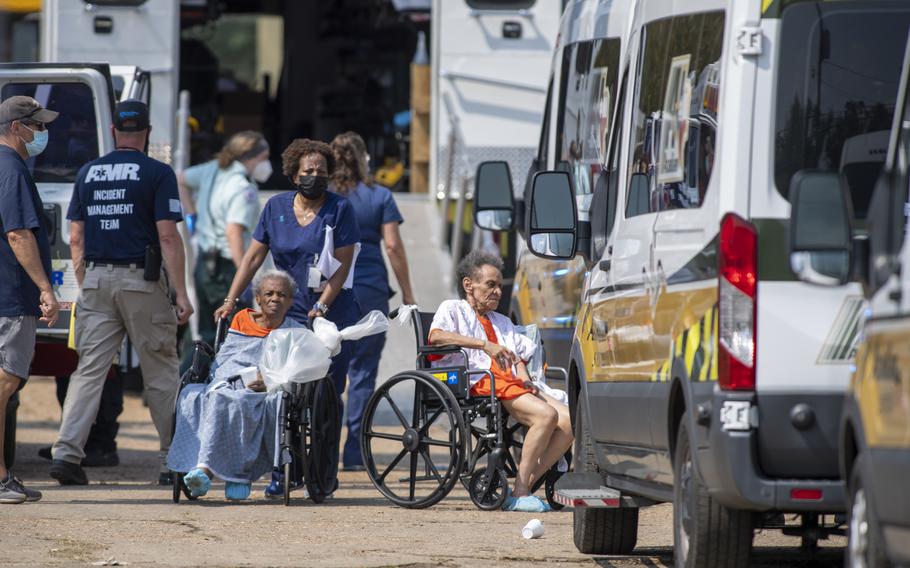 Paramedics evacuate people at a mass shelter Thursday, Sept. 2, 2021, in Independence, La. Multiple nursing home residents died after Hurricane Ida, but full details of their deaths are unknown because state health inspectors said Thursday that they were turned away from examining conditions at the facility to which they had been evacuated. (CHRIS GRANGER/The Times-Picayune/The New Orleans Advocate via AP)

BATON ROUGE, La. — Among the many tragic stories in the aftermath of Hurricane Ida are the deaths of seven Louisiana nursing home residents who were evacuated to a warehouse where health inspectors say conditions quickly became unsafe once the storm struck.

The squalid conditions found at the Tangipahoa Parish warehouse that sheltered more than 840 people raised new questions and concerns about whether Louisiana is doing enough to protect its most vulnerable residents.

"The short answer is more needs to be done," said Denise Bottcher, Louisiana state director for AARP. "Each hurricane presents us with opportunities to learn how can we do it better. This storm showed that we continue to fail our most fragile and vulnerable citizens."

Bottcher has a unique perspective. She was then-Gov. Kathleen Blanco's chief spokesperson when Hurricane Katrina struck 16 years ago and highlighted the inadequacies of nursing home storm preparations.

State officials said they are investigating the evacuation of the seven nursing homes owned by Bob Dean to the warehouse facility. The health department revoked the nursing homes' licenses and ordered the facilities closed so people couldn't be sent back after authorities moved the residents from the warehouse to shelters and other sites.

But health department leaders also said they intend to review the evacuation and sheltering preparation required ahead of any storms.

"I think this is going to — and should — be an ongoing conversation," said Dr. Joe Kanter, the chief medical officer at the Louisiana Department of Health. "I think clearly there is more that has to be done. There's absolutely no question about that."

After Ida roared ashore as a Category 4 hurricane on Aug. 29, representatives of the seven nursing homes were telling the health department the situation was "fine," but inspectors who made multiple visits to the warehouse facility told a different story.

Authorities found water entered the building, trash piled up on site and residents were packed into close spaces despite the coronavirus pandemic, according to documents filed by the health department. Inspectors making follow-up visits described people lying on mattresses without food or clean clothes and with strong odors of feces and urine filling the space.

One evacuee said she hadn't had a bath in four days, while others were found naked or wearing only unclean diapers. An evacuee struggling to breathe and yelling for help was ignored, until a nurse was prompted to assist him by an inspector, the health department documents said.

Agency officials said they met repeated resistance to address the concerns from Dean, who they said ordered inspectors off the property and used a "campaign of threats, intimidation and attempts at interfering" with efforts to assess the safety of evacuees.

Dean has not responded to messages left by The Associated Press at phone numbers listed for him and his businesses and through attorneys who have represented him. But Dean defended the Ida evacuation to WAFB-TV: "We only had five deaths within the six days, and normally with 850 people you'll have a couple a day, so we did really good with taking care of people."

Louisiana rewrote its nursing home laws and regulations after Katrina was blamed for dozens of nursing home patient deaths in 2005.

A health department study of Katrina's death toll found 132 nursing home patients died, including from the stress of the evacuation or preexisting conditions exacerbated by the storm impacts. Thirty-five residents of a nursing home in St. Bernard Parish drowned in Katrina's floodwaters.

Kanter said that before Katrina, some nursing homes didn't have evacuation plans at all. He said they are now required to submit annual plans to parish and state officials describing their emergency preparations in extensive detail.

But after Ida, questions are being raised about whether those plans are reviewed closely enough to ensure safety, whether staffing levels are adequate for evacuations and whether enough is done to make sure family members know where their loved ones are going in an evacuation.

"Clearly there were nursing homes that evacuated that did everything they were supposed to do to provide for the safety and welfare of their residents," Bottcher said. But she added: "There's some gaps."

Bottcher would like to see the emergency preparedness review also include senior housing sites that are regulated through a mix of federal and local oversight. New Orleans officials said several elderly residents died at such locations after Ida left them without electricity and air conditioning.