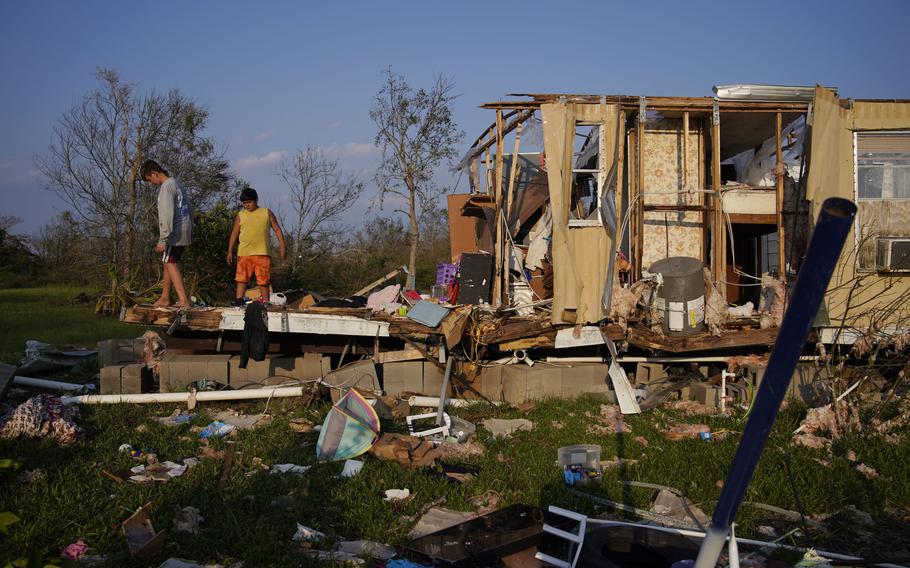 Aiden Locobon, left, and Rogelio Paredes look through the remnants of their family's home destroyed by Hurricane Ida in Dulac, La., Sept. 4, 2021. Louisiana students, who were back in class after a year and a half of COVID-19 disruptions kept many of them at home, are now missing school again after Hurricane Ida. A quarter-million public school students statewide have no school to report to, though top educators are promising a return is, at most, weeks away, not months. (John Locher/AP)

LULING, La. — Tara Williams’ three little boys run shirtless, because most of their clothes were swept away, and they stack milk crates beneath a blazing sun because their toys are all gone too. Their apartment is barely more than a door dangling from a frame, so they crowd into a Ford Fusion for shelter.

And as if Hurricane Ida didn’t take enough, it has also put the boys’ education on hold.

“They’re ready to get inside, go to school, get some air conditioning,” said 32-year-old Williams, who has twin 5-year-olds and a 7-year-old and is more pessimistic than officials about when they might be back in class. “The way it’s looking like now, it’s going to be next August.”

After a year and a half of pandemic disruptions that drove children from schools and pulled down test scores, at least 169,000 Louisiana children are out of class again, their studies derailed by the storm. The hurricane followed a rocky reopening in August that led to more COVID-19 infections and classroom closures, and now it will be weeks before some students go back again.

“How concerned am I? If you pick up a thesaurus, whatever’s the word for ‘most concerned,’” said Jarod Martin, superintendent of schools in hard-hit Lafourche Parish, southwest of New Orleans. “We were brimming with optimism and confident that we were going to defeat COVID, confident we were on a better path. And now we’ve got another setback.”

In the most devastated areas, returning to class requires not only schools be repaired or temporary classrooms set up, but for students and staff scattered around the country to come back. That means they must have homes with electricity and running water. Buses must run, cafeterias must be stocked with food and on and on.

After the storm destroyed their house in Dulac, a stretch of Cajun country swampland, 43-year-old Penny Verdin’s two children and a nephew she cares for began living in their car, along with a gecko, a hamster and a squirrel named Honey. They hope to use some lumber and tin from the carcass of their home to fashion a new shack.

After a year in which nearly the whole family fell sick with COVID-19 and Verdin’s disability checks were suddenly halted, she’s worried about them falling behind in their studies. Christopher Williams, 5, pushes a shopping cart outside his family's destroyed apartment in Luling, La., on Tuesday, Sept. 7, 2021. Williams and his two brothers stack milk crates in a vacant parking lot to pass time because their toys were swept away by Hurricane Ida. They are among an estimated 250,000 children across Louisiana with no school to go to after the storm left them shuttered. (Matt Sedensky/AP)

Though many children spent most or all of last school year back in class, some children remained in virtual programs and arrived back in class last month for the first time since the shutdowns began, but the return led to nearly 7,000 infections of students and teachers in the opening weeks. More quarantines, shutdowns and disruptions resulted.

The latest state standardized test scores, released in August, showed a 5% drop in proficiency among students across Louisiana.

The state’s education superintendent, Cade Brumley, acknowledged that students “did lose a little bit” and that Ida dealt another blow, but he said all students would likely be back in a matter of weeks.

“We need to get those kids back with us as soon as we possibly can,” he said.

When the pandemic first raged and students were forced to learn on screens at home, some observers warned of a “lost generation” of children falling through the cracks. The opening of the school year gave some teachers their first chance to fully assess the effects on pupils, only to have students forced out again.

Lauren Jewett, a 34-year-old special education teacher in New Orleans, already had students who were dealing with family deaths from COVID; now she’s hearing about their collapsed roofs, swamped homes and dwindling resources. She had just been starting to evaluate any regression due to the pandemic’s disruptions when the storm hit.

“We couldn’t cover all of the things that are supposed to be covered because of all the disruptions,” she said.

Many people remain without power or running water, and in several parishes, no reopening dates have been announced for schools. They are simply closed until further notice.

Inevitably, as parents ponder what’s next for their children, 2005’s monster Hurricane Katrina is invoked. When researchers at Columbia University and the Children’s Health Fund tried to determine that storm’s impact on children five years after landfall, they found unstable living conditions persisted, serious emotional and behavioral issues were rampant and one-third of students in affected areas were behind in schooling for their age.

“We don’t have to go back that far to see the outright and ultimate failure of our children,” said Kevin Griffin-Clark, a 36-year-old entrepreneur and father of three who is now running for City Council in New Orleans. “Now the children are going to suffer even more.”

Douglas Harris, a Tulane University economist whose work focuses on education, said he expects test scores will eventually recover, as they did after Katrina, but they won’t be a true reflection of the harm.

New Orleans’ schools superintendent, Henderson Lewis Jr., flatly rejects comparisons to Katrina, saying physical damage to schools is minimal. He said some will be able to return to class on Wednesday and all should be back by Sept. 22. But he acknowledges the hardships for students since COVID-19 first shuttered schools on March 13, 2020, and everything that’s happened since.