Moussaoui trial revisited on the eve of Sept. 11 anniversary 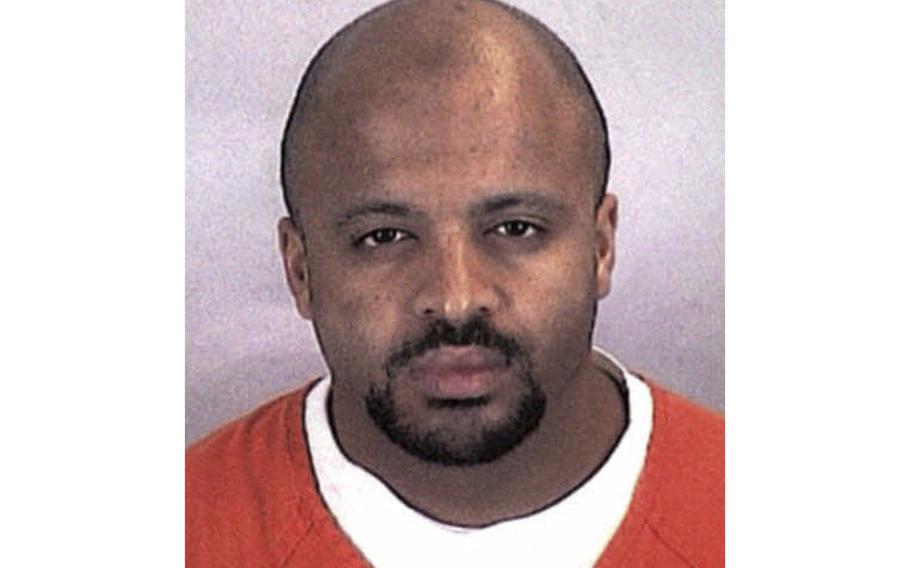 Zacarias Moussaoui, the only person convicted in a U.S. court of a role in the Sept. 11 attacks. (Sherburne County, Minn., Sheriff’s Office via AP)

FALLS CHURCH, Va. — Zacarias Moussaoui remains the only person ever convicted in a U.S. court in connection with the Sept. 11 attacks. A behind-the-scenes look at the trial Thursday from its lead participants demonstrated how hard it was to bring it to justice.

Rob Spencer, the lead prosecutor on the Moussaoui case, recalled the battles he and others in the Justice Department fought to keep Moussaoui in civilian courts at a time when military prosecutors and others wanted him to face a tribunal at Guantanamo Bay.

"When things weren't looking rosy for us on the prosecution, we would joke to each other that you could hear the Black Hawk helicopter coming to pick him up and take him to Gitmo," Spencer recalled Thursday during an online panel hosted by federal prosecutors in Virginia. The forum was part of a commemoration of the 20th anniversary of the Sept. 11 attacks.

U.S. District Judge Leonie Brinkema, who presided over the case, said there were points during the trial that she and her clerks believed prosecutors wouldn't even clear the first hurdle with the jury and be able to prove that Moussaoui was legally eligible for the death penalty.

"And then Moussaoui took the stand," Brinkema said.

He claimed that he was supposed to have hijacked a fifth plane and flown it into the White House, a claim he later recanted. And on cross-examination, he reveled in the deaths, mocking victims and family members.

"He basically just blew their defense out of the water," Brinkema said. "Once he started talking, I thought, 'He just lost them (the jury)."

Moussaoui was arrested in August 2001, before the attacks, when his efforts to obtain advanced flight training drew suspicion. He was charged in December as being a member of the al-Qaida conspiracy that carried out the attacks that killed 3,000 people.

It took years to work through various pretrial procedural issues, including a period where Moussaoui served as his own lawyer and filed handwritten screeds against the judge and others under the guise of legal motions. Appellate courts weighed in several times on how to handle classified evidence, including statements from al-Qaida leaders like Khalid Sheikh Mohammed, which were obtained under enhanced interrogation techniques that many said were equivalent to torture.

Moussaoui actually pleaded guilty to the charges against him, so the 2006 trial was simply to determine whether his sentence would be life in prison or death. In the first phase of the trial, prosecutors had to prove that Moussaoui's role in the conspiracy led to the deaths of Sept. 11 victims, making him eligible for the death penalty.

Once he was determined to be eligible, the jury then considered whether he deserved the death penalty.

The jury found him eligible for execution, but one of 12 jurors voted for life in prison rather than execution. That was enough to keep Moussaoui off death row; he's serving a life sentence in Colorado.

Ed MacMahon, one of Moussaoui's court-appointed lawyers, recalled that the only viable strategy was to tell the jury that Moussaoui was embellishing his role within al-Qaida, and that executing him would only give him the martyrdom he craved.

Moussaoui's exact role in the Sept. 11 conspiracy remains imprecise. In broad strokes, Spencer said, Moussaoui's guilt was obvious: He was receiving flight training that he had no rational reason to be taking, and he received $10,000 from Ramzi bin al-Shibh, a key member of the Sept. 11 plot, a month before the attack.

Spencer said prosecutors believed Moussaoui was to serve as a backup pilot to Ziad Jarrah, the Flight 93 pilot who left the U.S. in the summer of 2001 to visit his girlfriend and may have been having second thoughts about participating.

"I don't know what role, if any, he would have served on 9/11 or perhaps a follow-on plot," Spencer said. "We never had to answer that question."

Despite the difficulties in bringing Moussaoui to trial, Brinkema, Spencer and MacMahon all agreed that the case ultimately demonstrates the ability of the judicial system to bring the cases to conclusion, something that has yet to happen with bin al-Shibh or Mohammed, who remain at Guantanamo.

"II's amazing to me that the rest of the culprits in this case have not been brought to justice.," Brinkema said.

Acting U.S. Attorney for the Eastern District of Virginia Raj, who moderated Thursday's panel, called the Moussaoui prosecution "one of the most significant in our nation's history.

"We are holding this event not only to share the lessons of the Moussaoui case, but also to recognize and reflect upon the role of the justice system in responding to the tragic events of Sept. 11," he said.