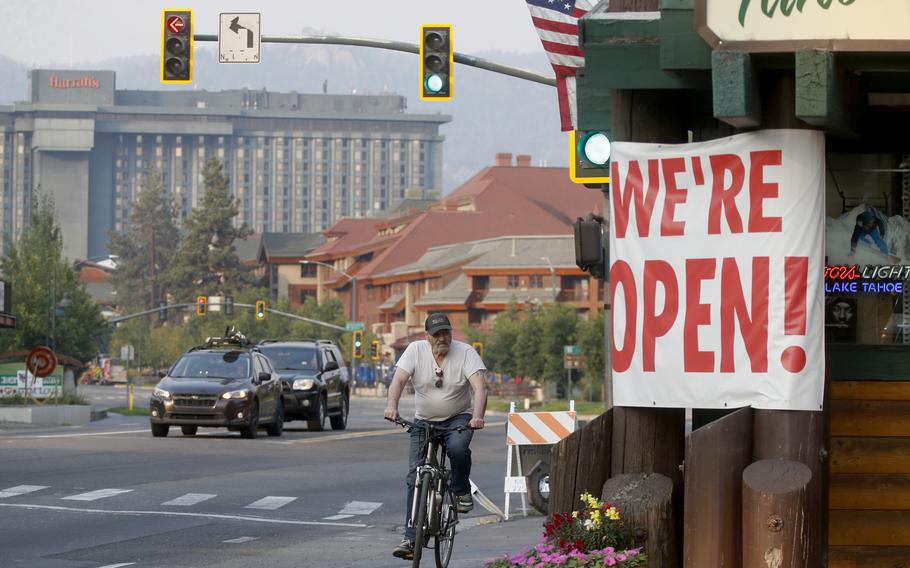 SOUTH LAKE TAHOE, Calif. — Thousands of people who fled South Lake Tahoe under threat of a wildfire were allowed to return as crews stalled the flames from advancing, but many shops remained dark Monday and the resort town's normally bustling streets remained quiet.

A week ago, the scenic tourist town on the California-Nevada state line emptied out when authorities issued an evacuation order as the fire approached from the south. Now, traffic is trickling back but nothing like the crowds that typically pour in over the summer to enjoy Lake Tahoe's crystalline waters, which are covered by a smoky haze.

Lake Tahoe Community College student Dakota Jones returned Monday to South Lake Tahoe after being evacuated to Carson City, Nev. He said he worried he'd find buildings damaged or covered in ash and was pleasantly surprised to find the city of 22,000 people largely untouched when he and his roommates, who were in the process of moving when the fire approached, drove a U-Haul full of their belongings back to their old apartment.

"I was honestly convinced this place was gonna go down," Jones said. "It was nice to see that I was wrong."

Evacuation orders for South Lake Tahoe and other lakeside areas were downgraded to warnings Sunday afternoon and California Highway Patrol officers began removing roadblocks along State Highway 50 from Nevada to the city limits. Authorities warned that residents of the scenic forest area weren't out of the woods yet, with risks ranging from smoky, foul air to belligerent bears.

The threat from the Caldor Fire hasn't entirely vanished but downgrading to a warning meant those who wish could return to their homes in what had been a smoke-choked ghost town instead of a thriving Labor Day getaway location. South Lake Tahoe Fire Chief Clive Savacool said officials hoped to have the hospital emergency room open within 24 hours but people with health problems might want to consider staying away due to the air quality.

Authorities also warned that in the absence of humans, bears had gone to town, spreading trash everywhere that must be picked up.

"The delicate balance between humans and bears has been upset," and anyone who thinks a bear may have entered their home should call law enforcement, El Dorado County sheriff's Sgt. Simon Brown said.

The lifting of mandatory evacuation orders for the Tahoe area marked a milestone in the fight against the fire, which erupted on Aug. 14 and spread across nearly 340 square miles of dense national parks and forests, tree-dotted granite cliffs and scattered cabins and hamlets in the northern Sierra Nevada.

At its peak, the fire burned as much as 1,000 acres an hour and last month virtually razed the small community of Grizzly Flats.

But in recent days the winds eased and thousands of firefighters took advantage of the better weather to hack, burn and bulldoze fire lines, managing to contain 44% of the perimeter by Monday.

Most of the western and southern sides of the fire were corralled, although some areas still were off-limits.

No homes were lost on the northeastern side of the fire nearest to the lake, and crews managed to carve more fire line along one edge of a fiery finger.

Authorities noted the progress but said single-digit humidity on Monday and slightly more wind could spur spot fires up to half a mile away. They urged firefighters to stay alert.

"We are drier than I have seen on my 20 days on this fire," said Jim Dudley, incident meteorologist. "There's a lot of potential weather-wise for little things to become maybe not so little."

California and much of the U.S. West have seen dozens of wildfires in the past two months as the drought-stricken region sweltered under hot, dry weather and winds drove flames through bone-dry vegetation.

In California, more than 14,500 firefighters were battling 14 active fires. Since the year began, more than 7,000 wildfires have devoured 3,000 square miles, Cal Fire said.

On Sunday, a new fire broke out in Placer County, burning half a square mile and prompting evacuation orders, warnings and road closures.

The fires have been concentrated in Northern California, where the weather is expected to cool slightly and the humidity to rise starting Tuesday.

No deaths have been reported specifically from the fires.

Fire concerns have shut down all national forests in the state.

California has experienced increasingly larger and deadlier wildfires in recent years as climate change has made the West much warmer and drier over the past 30 years. Scientists have said weather will continue to be more extreme and wildfires more frequent, destructive and unpredictable.