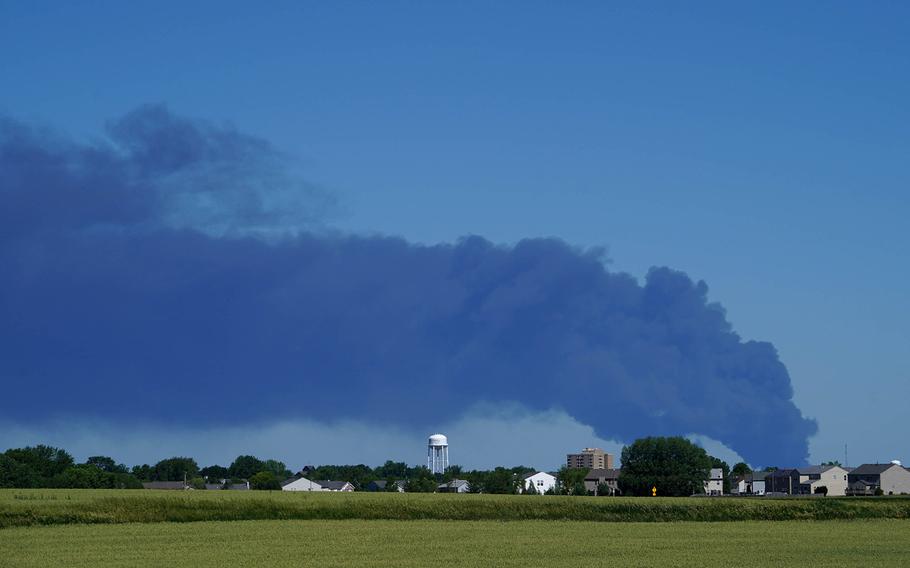 The Chemtool Inc. chemical fire can be seen burning as motorist travel down westbound I-90 on Monday, June 14, 2021, in Belvidere, Illinois. (Stacey Wescott, The Chicago Tribune/TNS)

CHICAGO (Tribune News Service) — A massive fire at a chemical plant in northern Illinois spurred the governor to deploy the National Guard to the area as local residents were evacuated. No injuries have been reported.

The industrial fire broke out early Monday morning at a lubricants plant operated by Chemtool, owned by a unit of Warren Buffett’s Berkshire Hathaway Inc. The blaze, burning in Rockton, Illinois, continued to send a thick plume of black smoke into the sky in the late afternoon.

Residents are being evacuated within a 1-mile radius from the plant and asked to wear face masks within a 3-mile radius as a precaution to protect themselves from the smoke, officials said during a press conference Monday. Gov. J.B. Pritzker activated the state’s National Guard on Monday afternoon and deployed emergency vehicles to support local authorities.

The National Guardsmen will be supporting efforts to perform environmental testing and monitoring, company officials told Bloomberg in an emailed statement.

“Additional specialized emergency response teams are expected shortly at the site,” plant officials said in an email. “They will work alongside local emergency responders to extinguish the fire and limit the impact on the community.”

Local, state and federal officials are working together to keep residents and visitors out of the immediate area around the plume as roughly 150 firefighters work in shifts to put the blaze out, officials said during the joint press conference. The fire continues to burn in parts of the factory, they said. Various government agencies are checking air samples for chemicals fueling the fire in the lubricant plant and assessing the potential for runoff into the Rock River.

Firefighters stopped using water to put out the fire because of concern that the runoff could contaminate the river, Kirk Wilson, chief of the Rockton Fire Protection District, said during the press conference. The cause of the fire is under investigation, he said. Jordan Abudayyeh, a spokesperson for the governor, said the state’s recommendation is a 2-mile radius for evacuation, but the local emergency officials are tasked with making local decisions and decided to go with a 1-mile evacuation radius.

Opened in 2008, the plant specializes in making industrial fluids, greases and lubricants and was acquired by Lubrizol, a Berkshire Hathaway Company, in 2013, according to Chemtool’s website

“We are working with experts and government agencies on environmental air and water monitoring,” plant officials said.

“To-date, test results do not show any health risk other than the short-term irritation one would normally experience in the presence of smoke. We will continue to complete additional testing and have released all product data information to local authorities.”