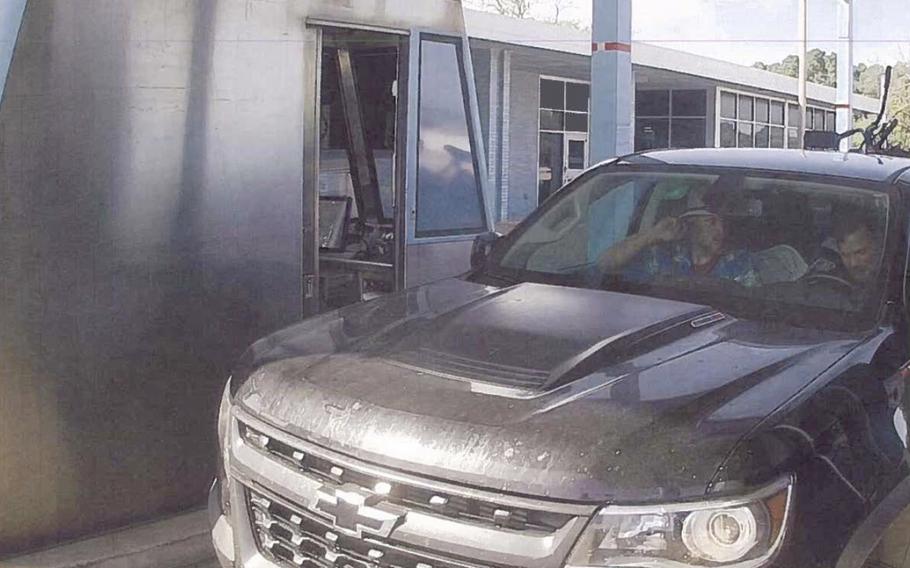 GREENBELT, Md. — Two neo-Nazi group members whose talk of planning an attack at a Virginia gun rights rally was secretly recorded by the FBI pleaded guilty on Thursday to gun charges.

Former Canadian Armed Forces reservist Patrik Jordan Mathews, U.S. Army veteran Brian Mark Lemley Jr. and a third member of The Base were arrested on federal charges in Maryland ahead of the January 2020 rally at Virginia's Capitol in Richmond.

Mathews, 28, and Lemley, 35, pleaded guilty at separate hearings to charges including illegally transporting a firearm and obstruction of justice — they destroyed cellphones when FBI agents raided their apartment.

The third co-defendant, William Garfield Bilbrough IV, was sentenced to five years in prison after pleading guilty in December to helping Mathews illegally enter the U.S. from Canada in 2019.

After a prosecutor read aloud a summary of the case against them, the judge asked them the same question: "Did you do the things the government said you did?" Mathews and Lemley both replied that they did. Mathews pleaded guilty to four counts that carry a combined total of 50 years in prison. Lemley pleaded guilty to seven counts punishable by a maximum of 70 years. However, in both cases, federal sentencing guidelines likely will recommend a prison sentence that is significantly lower than the statutory maximum.

U.S. District Judge Theodore Chuang, who isn't bound by the guidelines, is scheduled to sentence Mathews and Lemley on Oct. 28.

None of the defendants faced terrorism-related charges, and a "stipulation of facts" signed by Mathews, Lemley and prosecutors didn't mention the Richmond rally. But prosecutors are reserving the right to seek a so-called terrorism enhancement at sentencing that could lead to a significant increase in a prison term if the judge agrees to apply it.

Matthews and Lemley, who lived in Elkton, Maryland, discussed "the planning of violence" at the Richmond rally, where thousands of gun-rights activists later gathered peacefully to protest gun-control legislation, Justice Department prosecutors said in a court filing.

Investigators installed a closed-circuit television camera and microphone inside a Newark, Delaware, apartment that Mathews and Lemley shared for several months after Mathews left Canada. The surveillance equipment captured Lemley and Mathews discussing "the next Civil War" erupting in Virginia and talking about committing "targeted acts of violence," prosecutors said in a Jan. 21 court filing.

"I need to claim my first victim," Lemley said, according to prosecutors.

Bilbrough, 21, of Denton, Maryland, participated in early discussions about traveling to Richmond but had tried to distance himself from the group shortly before his arrest, a prosecutor has said.

Among other white supremacist and neo-Nazi groups, the Base has been a leading proponent of "accelerationism," a fringe philosophy that advocates using mass violence to hasten society's collapse. Members often communicated in encrypted chat rooms and attended military-style training camps.

The Guardian identified The Base's founder as American-born Rinaldo Nazzaro, who formed the group in 2018 using the pseudonym "Norman Spear" and was believed to be living in Russia. The Department of Homeland Security confirmed that Nazzaro worked for the agency from 2004 to 2006, Vice News reported in February.

The case against the three men charged in Maryland was part of a broader investigation of The Base. In January 2020, authorities in Georgia and Wisconsin arrested four other men linked to the group.

The Base has crumbled amid members' prosecutions and revelations about Nazzaro's background, said Joanna Mendelson, associate director of the Anti-Defamation League's Center on Extremism. Nazzaro has tried but largely failed to resuscitate the group, she added.

"Many within the movement have attempted to distance themselves from him and his activities, as the group is seen as either a honeypot or destined to attract immediate law enforcement attention," Mendelson said.

The unraveling of The Base doesn't eliminate the potential threat posed by extremists who joined the group, she stressed.

"We're talking about adherents who are deeply steeped in an ideology," Mendelson said. "They oftentimes direct their deeply embedded beliefs into other neo-Nazi organizations."

Mathews told investigators that he was living in Beausejour, Manitoba, and working as a carpenter for a construction company before he entered the U.S. Mathews also said he was a combat engineer in the Canadian Army before serving eight years as an Army reservist.

Mathews left Canada after a Winnipeg Free Press reporter exposed him as a member of The Base in an August 2019 article. Bilbrough and Lemley drove to Michigan to pick up Mathews and take him to Maryland.

Mathews and Lemley have remained jailed since FBI agents arrested them in Delaware in January 2020.

Mathews and Lemley were charged in Maryland with illegally possessing and transporting a firearm and ammunition. A grand jury in Delaware indicted them on separate but related charges.

In February, the judge refused to bar prosecutors from using evidence that FBI agents obtained through search warrants. The FBI also had an undercover employee infiltrate the group, visiting the Delaware home and driving with Mathews and Lemley to a gun range in Maryland in January.