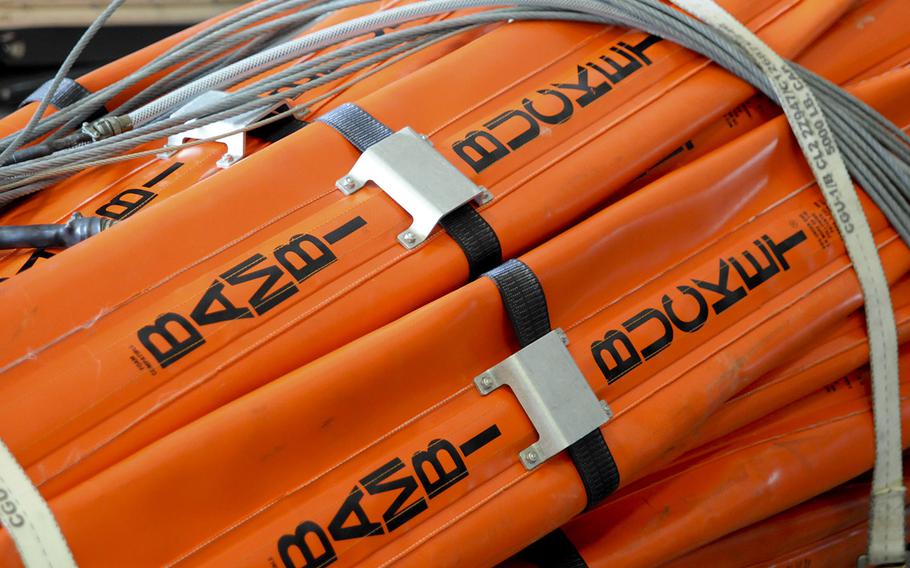 Six soldiers with the 2-238 General Support Aviation Battalion out of Peoria, Ill., departed Aug. 29 to support California in firefighting operations. The GSAB brings with it a “Bambi Bucket,” which can hold up to 2,000 gallons of water to assist in operations. (Kierra Harris/U.S. Army)

Six soldiers with the 2-238 General Support Aviation Battalion out of Peoria, Ill., departed Aug. 29 to support California in firefighting operations. The GSAB brings with it a “Bambi Bucket,” which can hold up to 2,000 gallons of water to assist in operations. (Kierra Harris/U.S. Army) 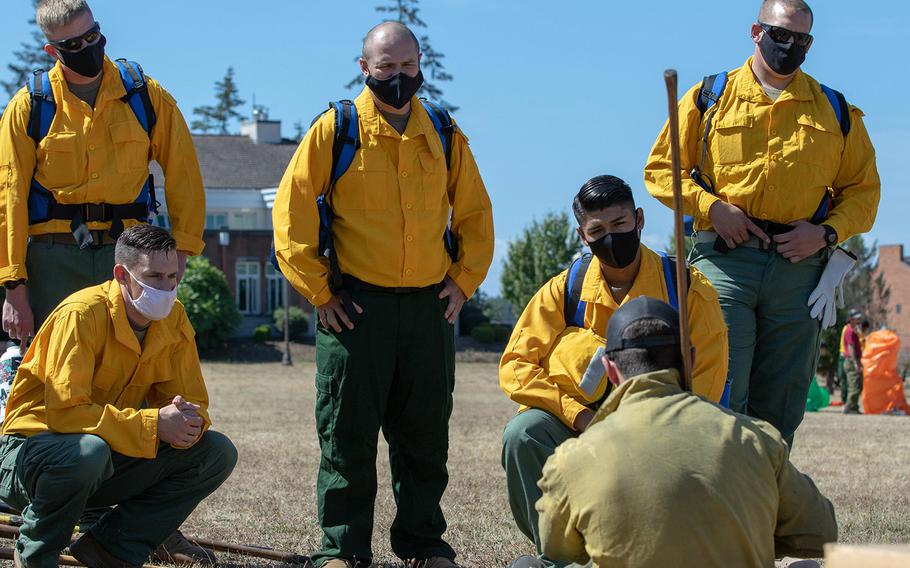 About 200 soldiers from the 14th Brigade Engineer Battalion from Joint Base Lewis-McChord, Wash., trained with the National Interagency Fire Center through the weekend. On Monday, they traveled to northern California to help fight wildfires in the Mendocino National Forest. (Preston Robinson/U.S. Army)

“We are proud to support the U.S. Department of Agriculture’s Forest Service in their effort to suppress the fires in Northern California,” said Lt. Gen. Laura J. Richardson, commander of Army North, the military entity tasked with overseeing the mission. “The soldiers who will assist in this mission are highly trained and they are well-equipped with all of the protective gear needed to keep them safe, to include in a [coronavirus] environment.”

Training and equipment to mitigate the spread of coronavirus remained a top priority as well, said Lt. Col. Jim Wade, commander of the engineer battalion, who also traveled to California to lead the troops on the mission.

“I’m confident that we have appropriate safety precautions in place,” he said. “It’s going to be a challenging mission, with a lot of hard work and long days.”

Once they arrive Monday to the base camp for the blaze known as the August Complex Fire, soldiers will get two more days of training before the join firefighting efforts Thursday.

The fire started Aug. 17 from 37 different lightning fires, according to the U.S. Forest Service. Many of those fires have been contained or have merged to form larger fires. As of Monday morning, the fire was 236,288 acres, and 20% contained.

“This support will provide additional capacity to ensure firefighting resources are available to respond to ongoing and emerging wildfires in California,” said Randy Moore, regional forester for the Pacific Southwest Region, said in a statement.

The battalion has known since July that they could be called upon to fight fires, which is a mission requirement handed to two Army battalions annually through a wildland firefighting partnership with public lands agencies. Soldiers last deployed in 2018 to support firefighting in the same region.

“We have about 30 or so soldiers who were part of mission in 2018. They were the first to raise their hand and jump on it. They are eager to get there and offer support,” Wade said.

Defense Department support for firefighting on federal land began in 1975 with an interagency agreement with the departments of Agriculture and Interior.

There are 38 large wildfires now burning in California, with more than 1.5 million acres burned so far this year, according to the Forest Service.

The National Guard has about 1,570 members activated and assisting with fires primarily in California. About 200 of those troops are working in Arizona, Colorado, New Mexico and Oregon, according to the National Guard Bureau.

As of Monday, Air National Guard crews using the Modular Airborne Firefighting System have flown more than 322 hours, nearly 260 sorties and conducted 240 water drops, according to the bureau.

“This is what I joined the Guard for,” said Illinois Army National Guard Staff Sgt. Chad Brown, an aircraft mechanic and flight crew member.

Brown’s six-member Chinook helicopter crew arrived Monday in Mather, Calif., about 18 miles east of Sacramento, where they will use a “Bambi Bucket” carrying 2,000 gallons of water that can be dispersed either directly onto fires, or deployed as a method of moving and shaping a developing fire.

“I’ve done a couple of deployments in Afghanistan, but I like helping out the public and helping out other states if we can,” Brown said.