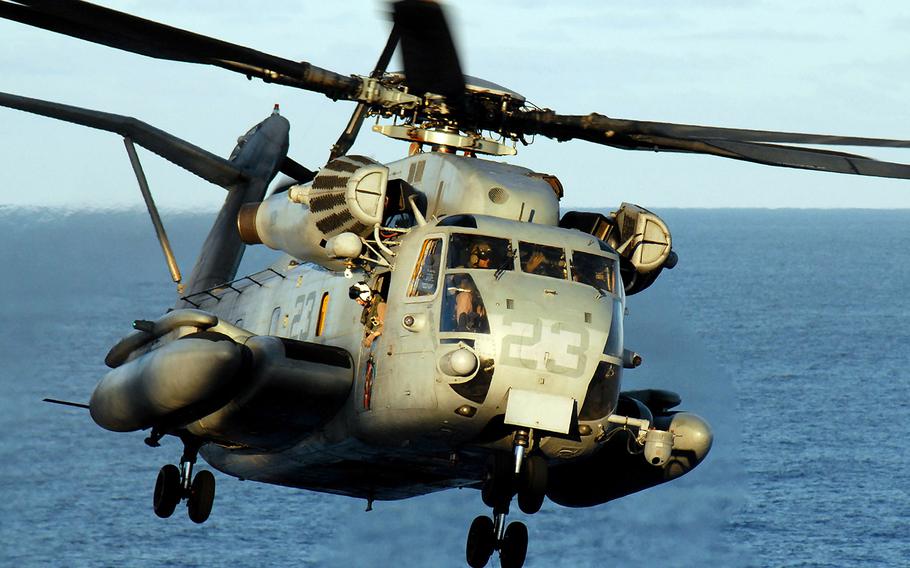 WASHINGTON — Two heavy-lift helicopters that crashed off the coast of Hawaii were conducting a routine training flight with 12 Marines aboard when they apparently collided Thursday just before midnight.

The U.S. Coast Guard was searching a debris field early Friday afternoon about 2.5 miles off of the north-facing coast of Oahu, near the town of Haleiwa for the missing Marines and the remnants of their CH-53E Super Stallion helicopters, said Lt. Scott Carr, a Coast Guard spokesman.

“There are no signs of survivors right now,” he said.

It was not immediately clear Friday what caused the crash. Capt. Timothy Irish, a Marine spokesman, said the crews were conducting a “pre-planned, routine training flight” that left from their home station at Marine Corps Base Hawaii on Oahu and planned to return to the same location. The debris field that the Coast Guard found was about 15 nautical miles from the base.

“Our heartfelt condolences go out to the families of all those involved in the mishap, and (we) express our deepest gratitude for the heroic, selfless actions of the civilian and military first-responders,” Irish said.

It also was unclear how long the helicopters, assigned to Marine Heavy Helicopter Squadron 463, Marine Aircraft Group 24, 1st Marine Airlift Wing, were in the air, Irish said. Marine Corps aviation mishap investigators had arrived at the site to begin an investigation, he said late Friday morning.

The Coast Guard received word of the downed aircraft at about 11:40 p.m., Hawaii time, Carr said.

High surf in the crash area was expected to complicate the search and rescue effort.

Carr said a high surf advisory was in place early Friday morning for the north-facing shore of Oahu, and waves in the area were reaching 10 to 15 feet high. They were expected to grow to 25 to 30 feet tall later Friday.

The CH-53E, often deployed aboard amphibious assault ships, is the military’s largest, heaviest and most-powerful helicopter, according to its manufacturer, Sikorsky. The aircraft can carry massive loads, according to the Marine Corps, including a 26,000-pound light armored vehicle, 16 tons of cargo, or a large enough force of combat-loaded Marines to lead an assault.

The helicopters that crashed Thursday were not conducting heavy-lift operations, and had no passengers aboard other than the normal six-person crew, Irish said.

The crash also comes less than a year after a Marine Corps tilt-rotor aircraft crashed during a training exercise in Hawaii, killing two Marines. The MV-22 Osprey went down last May with 21 Marines and a Navy corpsman on board. In 2011, one serviceman was killed and three others injured when a CH-53D Sea Stallion chopper crashed in Kaneohe Bay, Hawaii.