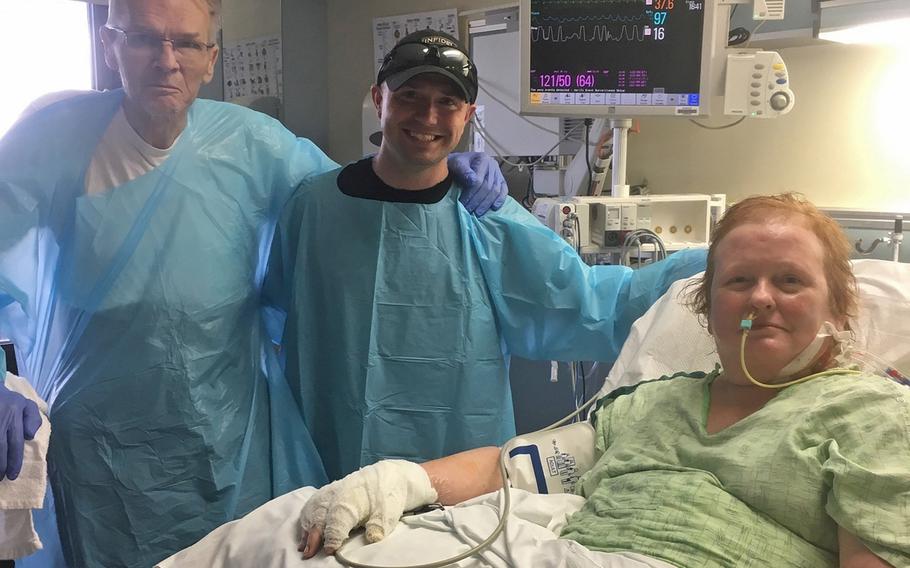 A 101st Airborne Division soldier who recently returned from supporting Iraqi security forces in their fight to retake Mosul has been nominated for an award for his bravery at home, the military said.

Staff Sgt. Nicholas “Bruce” Davis, a section chief assigned to the Fort Campbell-based division, earned a nomination for the Soldier’s Medal after sustaining burns pulling an injured couple from a burning vehicle along Interstate 24 outside Nashville, Tenn., in June, an Army statement said.

The military award, established more than 90 years ago, recognizes a soldier’s peacetime acts of personal bravery.

While driving to Chattanooga with his son and a friend, Davis noticed a man on the side of the road and then saw an overturned car. The seven-year combat veteran, who also served one tour in Afghanistan, pulled over and jumped out of his vehicle.

“On my way up to the car, I had noticed an engine fire that started,” he said in the statement.

After checking to see that the people in the car — Rick and Sharon Steiert — were both conscious, he used a glass-breaker on his pocket knife to shatter the car window. He noticed a gas can pouring into the passenger compartment, tossed it away from the vehicle and got inside the burning wreck to help the couple exit.

“As soon as I started doing all that the whole car [was] just engulfed in flames,” he said. “I felt it wrapped around my body.”

Like the DC Comics character The Flash, he said, he quickly pushed the man out of the vehicle and pulled the woman through a tight door opening. She was on fire from her waist down and he soon noticed his leg was also burning.

He snuffed out the fire on his own leg and used his shirt to battle the flames on Sharon Steiert before someone else showed up with a fire extinguisher. After putting out the flames, which kept reigniting on the woman’s pants, they moved away from the burning vehicle to await emergency responders.

An ambulance took Davis and Rick Steiert to Vanderbilt University Medical Center while Sharon Steiert was airlifted to the hospital. The artillery soldier was treated for severe second-degree burns over 75 percent of his right leg.

He has been working hard to recover and return to duty, said 1st Lt. Charles Trumpfheller, Davis’s platoon leader. He recently began doing physical training with his unit again.

“He’s just an all-around good soldier,” Trumpfheller said in the statement. “He’ll do anything for anybody and really I mean he’s one of those [noncommissioned officers] who you can count on to get things done.”