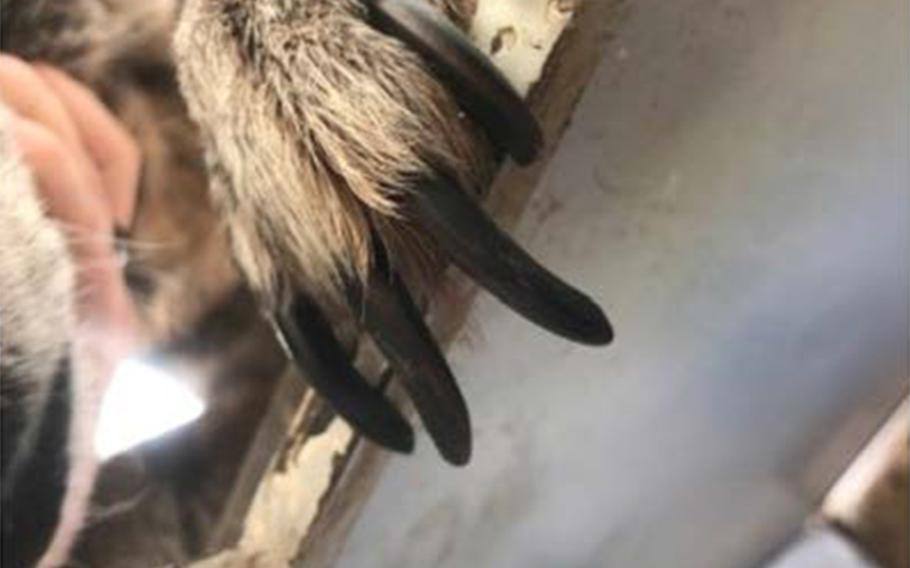 A bomb sniffing canine with excessively long nails in Jordan. The Department of State said Friday, Dec. 20, 2019 that it will temporarily stop sending dogs to Jordan and Egypt after at least six more of the animals died because of illness, overwork or poor care. (Photo from DOS IG report)

A bomb sniffing canine with excessively long nails in Jordan. The Department of State said Friday, Dec. 20, 2019 that it will temporarily stop sending dogs to Jordan and Egypt after at least six more of the animals died because of illness, overwork or poor care. (Photo from DOS IG report) 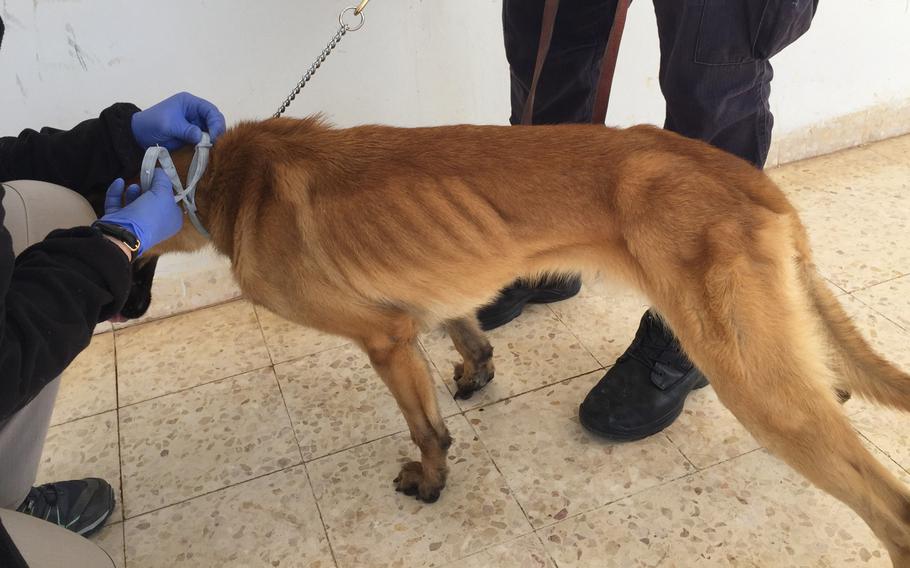 A malnourished bomb-sniffing dog named Mencey is seen in an April 2018 photo taken when a team of veterinary workers from the U.S. went to Jordan to try to prevent an outbreak of illness among U.S.-trained dogs. The 3-year-old Belgian Malinois had leishmaniasis and was euthanized when his kidneys failed. l (U.S. State Department Office of the Inspector General)

The U.S. is temporarily halting a program under which bomb-sniffing dogs were sent to countries in the Middle East after a report released Friday found at least five more of the specially trained dogs had died in Jordan and Egypt following poor care, mistreatment or negligence.

One of the dogs in Jordan died after overheating in June, and another was poisoned by insecticide sprayed near its kennel in September, the report by the State Department’s Inspector General said.

Three of 10 dogs the U.S. has provided to Egypt in the past year have also died — one from lung cancer, one from a ruptured gall bladder and one from heat stroke, the report said.

The announcement that the program is being stopped comes months after American inspectors found that at least 12 of the U.S.-trained canines sent to Jordan under an antiterrorism program had died from medical problems. Others were overworked, unhealthy and forced to live in kennels with “barely existent” sanitation, the officials said in an evaluation released in September.

At the time, the IG called for the U.S. to stop sending dogs to Jordan until a plan could be put in place to ensure the animals’ health and welfare, but State Department officials refused to do so. The department’s top security and counterterrorism officials said at the time their divisions were taking steps to improve monitoring of the health and training of dogs provided to foreign partner countries.

But the IG learned through a hotline complaint after the original report was published that two additional dogs had died in Jordan of “non-natural,” preventable causes.

“The death of two canines from non-natural causes — namely, hyperthermia and poisoning — since June 2019 raises serious questions about the Department’s contention that it has taken adequate steps to protect their health and safety,” said the report released Friday.

A third dog in Jordan was infected with leishmaniasis, a preventable disease spread by sand flies, officials told the IG in October. Last year, a 3-year-old Belgian Malinois provided to Jordan had to be euthanized after being infected by the same disease.

Jordan is the main recipient of U.S.-trained bomb-sniffing dogs but several other countries have also received canines under the program, which has been running for some 20 years.

Two of the deaths in Egypt were not previously disclosed to the IG, the new report said. Egypt had denied U.S. officials permission to visit the kennels or the airport where the animals would work, and would not allow U.S. mentors to accompany the dogs to Egypt for in-country training.

Egypt has since approved a health and welfare check of the canines by a State Department team, which was set to take place in November, officials told the IG in a formal response to the latest report. Based on the findings of that visit, further measures could be taken to help care for the animals there, officials said.

In its earlier evaluation, the IG said the department could not provide detailed information about programs in nine other countries which had a total of between 75 and 100 dogs as of last September.

In August, the State Department repossessed 10 dogs from Morocco because they were not being used for their intended purpose, the IG said.

But on a happier note, seven dogs who spent their careers in Jordan were retired in October and returned to the U.S., where they were adopted, it said.