US will not send ships to China’s upcoming naval celebration 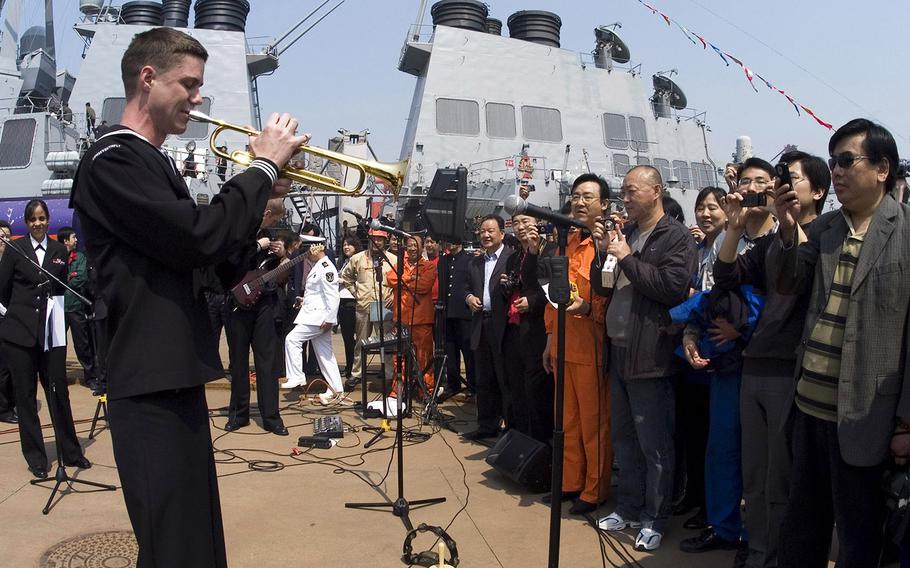 In a 2009 file photo, Petty Officer 2nd Class Collin Reichow plays a trumpet solo on the pier at Qingdao for Chinese citizens waiting to tour the guided-missile destroyer USS Fitzgerald during the International Fleet Review celebrating the 60th anniversary of the founding of the People's Liberation Army navy. The Pentagon says the U.S. won't be taking part in the 70th anniversary events this year. (U.S. Navy)

YOKOSUKA NAVAL BASE, Japan — The Navy will not be sending ships to China’s multinational naval celebration this month marking the 70th anniversary of the Chinese navy, according to Defense Department officials.

Instead, the U.S. Embassy Beijing defense attaché will represent the United States at the event in Qingdao, China, April 22-25, Pentagon spokesman Lt. Col. Dave Eastburn told Stars and Stripes in an email Thursday.

“The United States Navy will continue to engage the PLAN (People’s Liberation Army Navy) through established military-to-military dialogues, such as the Military Maritime Consultative Agreement working groups and Rules of Behavior discussions,” Eastburn said in the email.

China’s Ministry of National Defense announced March 28 that 60 countries will send navy delegations to its celebration, with many sending naval vessels, according to a transcript of ministry spokesman Senior Col. Wu Quian’s monthly press conference.

U.S. allies Japan, South Korea and the Philippines are sending vessels from their navies to participate, according to a report Friday by the Japan Times.

Events surrounding the anniversary will include “a high-level seminar, an international fleet review, military tattoo performances and cultural and sports activities,” Wu said, according to the transcript.

Eastburn did not say why the U.S. Navy would not be attending the celebration.

The news came amid tensions with China regarding Taiwan and the South China Sea.

Last week, China’s state-run media reported that China’s March 31 controversial fighter-jet flight over the median line in the Taiwan Strait between mainland China and Taiwan was meant to rebuke the U.S., which has sent its Navy through the strait on freedom-of-navigation operations five times in the last six months.

“China firmly opposes any forms of official and military ties between the U.S. and Taiwan. We have made clear our stern position to the U.S. many times,” Wu said at the March 28 press conference, according to the transcript.

The U.S. does not officially recognize Taiwan’s sovereignty and is committed to the One China policy, which acknowledges China’s claim on Taiwan.

“The One China principle is the political foundation of China-US relations,” China’s Ministry of Foreign Affairs spokesman Geng Shuang said at the press conference.

However, the U.S.’s de facto embassy, the American Institute in Taiwan, confirmed last week that it has had active-duty U.S. military stationed at its headquarters in Taipei since 2005, according to a Friday report by the South China Morning Post.

“The U.S. sending military personnel to Taiwan under whatever pretext constitutes a violation of the one-China principle and the three China-US joint communiques, which will inevitably have a negative impact on the bilateral relations,” Geng said, responding to reports.

Taiwan this weekend announced its intent to buy 66 F-16 fighter jets from the U.S., according to a Saturday report by the South China Morning Post, but Time magazine on Friday reported that Washington is holding off on the sale pending trade negotiations with Beijing.

The U.S. last year disinvited China from its Rim of the Pacific exercises off Hawaii in response to China’s island and reef militarization in the South China Sea. The Navy regularly conducts freedom-of-navigation operations near the islands and reefs that China claims; those claims are not recognized by international law.

China has claimed 27 islands and reefs in the South China Sea, building military outposts on at least 12 of them since 2014 – something China’s President Xi Jinping promised not to do in a press conference with then-President Barack Obama in 2015.