US watchdog sees few signs of progress in Afghanistan 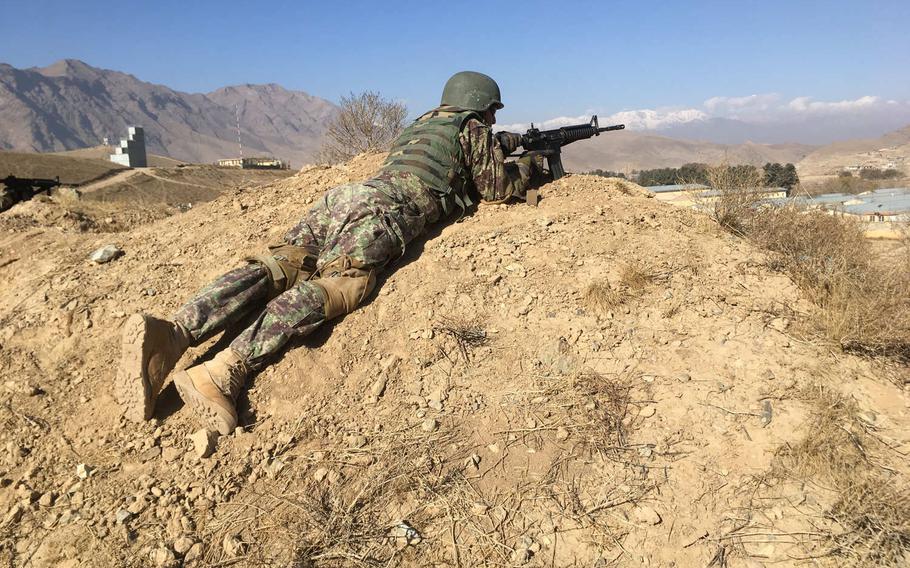 An Afghan soldier takes part in commando training in Kabul on Nov. 26, 2017. Plans are underway to double the country's commando force in a bid to reverse recent gains by Taliban insurgents. (Phillip Walter Wellman/Stars and Stripes)

The figures represented a bleak progress report on the U.S.’s longest war, now in its 18th year; however, a full assessment remains difficult because of Pentagon restrictions on Afghan forces data, the Special Inspector General for Afghanistan Reconstruction said.

SIGAR said Afghanistan’s army and police “made minimal or no progress in pressuring the Taliban” from July 1 to Sept. 30 — the period covered in its latest quarterly report — with both sides controlling less of the country but contesting more of it.

Those districts include about two-thirds of Afghanistan’s population. Kabul’s goal is to control or influence areas where 80 percent of the country’s 33 million people live in by the end of 2019.

Meanwhile, 3.5 million people lived in areas controlled or influenced by insurgents — a slight decrease since last quarter — while the number of people living in contested areas slightly increased to 8.1 million, the report added.

Since late 2015, nearly a year after the NATO transition from a combat mission to one focused on training and advising Afghans, the numbers have shown overall insurgent gains.

Some military analysts say those gains are even more substantial than the U.S. military reports.

A study by the Long War Journal, published by the nonpartisan group Foundation for Defense of Democracies, found that a little over half of Afghanistan’s people live in districts outside of government control. Meanwhile, Afghan forces are also struggling to maintain force strength, the SIGAR report stated.

The total was down 8,827 since the same period last year. The decrease puts Afghan forces at roughly 40,000 people below their target strength of 352,000, SIGAR said.

Casualties among soldiers and policemen was one of the main reasons for the dip, according to the Defense Department. However, the exact number of soldiers and police killed or wounded in recent months remains unclear, as casualty figures have been classified since September 2017 at Kabul’s request.

When questioned by SIGAR about casualty numbers, NATO’s Resolute Support mission said: “From the period of May 1 to the most current data as of Oct. 1, 2018, the average number of casualties the (Afghan National Defense and Security Forces) suffered is the greatest it has ever been during like periods.”

Speaking at the U.S. Institute of Peace on Tuesday, Defense Secretary Jim Mattis said over 1,000 Afghan security forces were killed or injured in August and September.

Despite congressional concerns over clarity in the war, the Defense Department classified even more data on Afghan forces in recent months, including the exact number of female personnel and all information about Afghan army and police attrition, SIGAR said. “SIGAR continues to urge transparency in data relating to the security aspects of Afghanistan reconstruction,” the report said.

For the first time, the watchdog this quarter requested detailed civilian casualty data from the NATO mission.

The United Nations Assistance Mission in Afghanistan has documented civilian casualties in Afghanistan since 2009. The findings are routinely disputed by the U.S. military, which uses different reporting methods.

In its latest report in October, UNAMA documented 8,050 civilian casualties during the first nine months of the year, including 313 deaths and 336 injuries caused by U.S. and Afghan airstrikes.

The NATO mission, meanwhile, recorded just 5,600 civilian casualties between Jan. 1 and Aug. 15, and only 102 of those were caused by airstrikes — 29 by U.S. strikes and 73 by Afghan strikes.