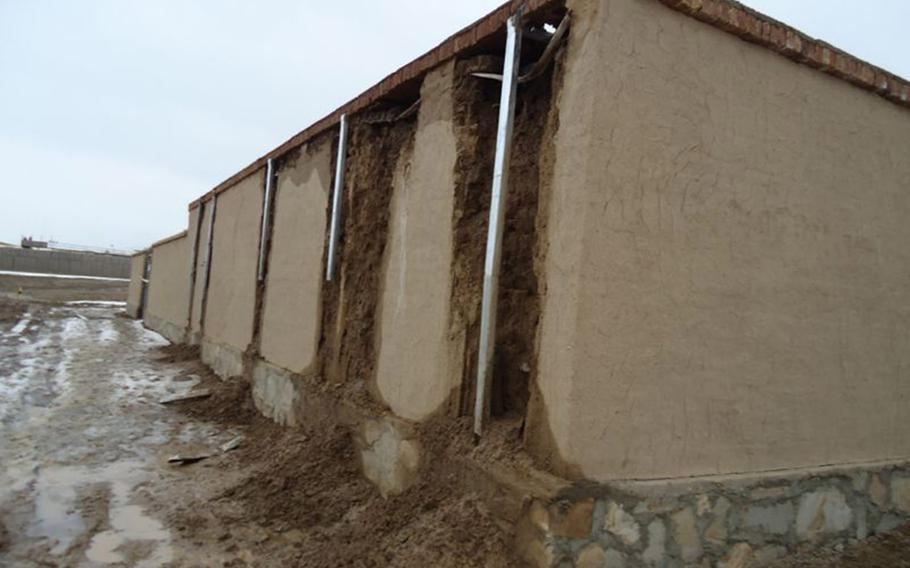 The Special Inspector General for Afghanistan Reconstruction released a report Thursday on the Afghan Special Police Training Center's dry fire range in Wardak province. This exterior view of a building deteriorating due to water penetration was an example of the damage found. (Photo courtesy of SIGAR)

A dry fire range at the Afghan Special Police Training Center in Wardak province is disintegrating because of shoddy construction materials, the builder’s failure to meet contract requirements and insufficient oversight by U.S. officials, according to a report released Thursday by the special inspector general for Afghanistan reconstruction.

The adobe-style brick buildings, meant to replicate a typical Afghan village and used to train for police search and clearance exercises, were “melting,” John F. Sopko wrote in the report, and the Afghans recently began a project to rebuild them.

“Although this project may have been well-intentioned, the fact that the Afghans had to demolish and rebuild the [dry fire range] is not only an embarrassment, but, more significantly, a waste of U.S. taxpayer’s money,” the report concludes.

But within four months, water caused the walls to start disintegrating, according to the report. Photos in the report, taken by a U.S. mentor to the Afghan National Police Training Center in February 2013, show significant portions of walls washed away by water, and a gaping hole in the upper corner of one room. A pile of dirt or mud is visible below the hole.

The report details several problems with the facility that led to the disintegration: The roof is not sloped properly to allow water to drain; the contractor used smaller-than-allowed bricks made mostly of sand, instead of clay; and interior roof support beams weren’t built properly or securely fastened to the building.

And though the contracting officer and that officer’s representatives did seven on-site inspections during construction, the report says, those visit reports did not note any of the deficiencies that led to the facility’s disintegration. Instead, in October 2012, the contracting officer’s visit report “indicated that the project was 100 percent complete, with no deficiencies or missing items noted.”

Regional Contracting Center officials first learned of the facility’s deterioration in February 2013, after a U.S. mentor at the training center alerted them. At the time, an RCC acquisition analyst determined that “the facility is completely unsafe … it appears the contractor intentionally used different standards to cut costs and/or fraud the government,” according to the SIGAR report. The analyst recommended the facility be torn down and rebuilt.

The contractor submitted several plans to fix some of the problems, but none of the plans addressed all of the problems, according to the report. In the following months, the contractor sent emails saying it had finished nearly all of the work, but could not seal the roof because the Afghan National Police would not give them access to the site. Yet, they also said they were not allowed to have cameras at the facility to take pictures to prove they had done the work.

The commander of the training facility sent photos in September of 2014 showing reconstruction work on the buildings; he said they had disintegrated to a point at which they were unusable.

Because of the multiple failures, Sopko is asking U.S. Central Command to determine to what extent the contractor failed to meet contract requirements and attempt to recoup the money, identify the contracting officer and others who were responsible for oversight to find out why the range wasn’t built to standards and what disciplinary action should be taken for the oversight failures.