US warns S. Korean workers will be furloughed if no deal reached on military cost-sharing 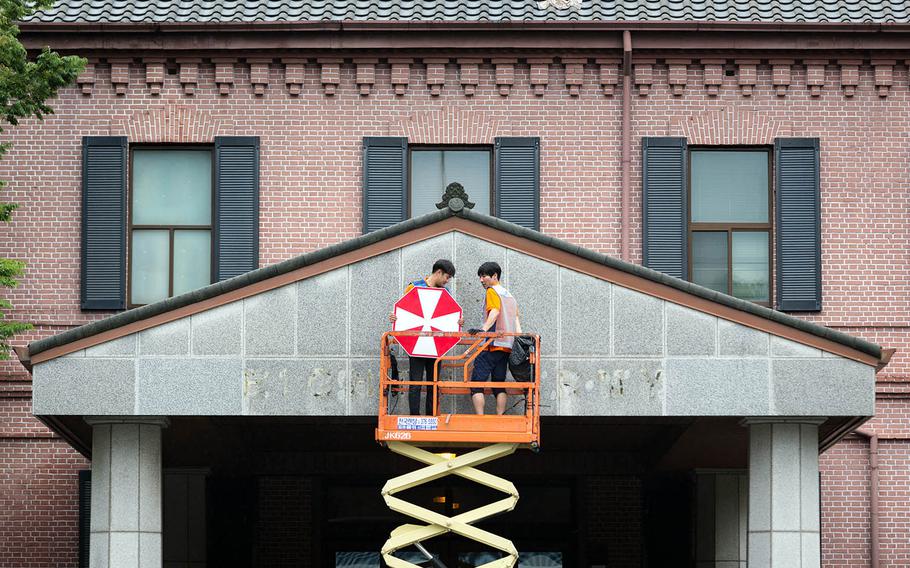 SEOUL, South Korea — The U.S. military has warned that South Koreans working on bases across the divided peninsula will need to be furloughed if Seoul and Washington fail to reach a new military cost-sharing agreement, Stars and Stripes has learned.

With the current five-year deal set to expire on Dec. 31, negotiators from both sides met Tuesday in Seoul for their 10th round of talks since March amid reports that President Donald Trump is demanding that the South pay much more for its own defense.

Much of the some $830 million per year paid by the South Korean government covers the salaries of local employees who provide services crucial to maintaining some 28,500 American troops stationed in the South.

U.S. Forces Korea, the main command for some 28,500 American troops based in the South, sent a letter to the Korean Employees Union warning that the military will be “required to issue a general furlough notice with an effective date of April 15, 2019,” if negotiations aren’t completed in a timely manner to avoid a lapse in funding.

The letter, signed by chief of staff Maj. Gen. Michael Minihan, said the notices would be issued no later than Feb. 13 to provide as much notice as possible.

Citing a joint labor management agreement, Minihan said “I am required to inform you officially that we anticipate the need to furlough Korean employees for more than 30 days.”

“Our Korean workforce is an instrumental part of the alliance between our countries, strengthening the defense of (South Korea),” he said, according to a copy of the letter obtained by Stars and Stripes. “We will continue to work with the (South Korean) government to find a solution to this challenge.”

USFK did not immediately respond to a request for further comment on possible contingency plans in case a deal isn’t reached.

The dealmaking comes as the alliance between the two countries, which was forged in the 1950-53 Korean War, is already under pressure from differences over how to approach peace efforts with the North amid stalled nuclear talks.

Trump has stated several times that he wants U.S. allies to pay more. He also has hinted that he would like to withdraw U.S. troops to save money, while insisting that issue is not on the table for talks with North Korea.

The Wall Street Journal, citing people familiar with the talks, reported last week that the administration has demanded that South Korea pay as much as double the current amount, or the equivalent of $1.6 billion per year.

U.S. officials have stressed that brinkmanship is common in cost-sharing negotiations. In 2013, the two sides missed the Dec. 31 deadline but managed to reach a deal a few weeks later, with South Korea agreeing to increase its contribution by 5.8 percent.

But experts expressed concern that it’s a dangerous time to alienate the South, which has played middleman in the efforts to persuade the North to give up its nuclear weapons.

“If Seoul is forced to bow to pressure from Washington and increase its defense contribution, people here are likely to feel a great deal of resistance against the U.S.,” said Kim Dae Young, a researcher at the Korea Research Institute for National Strategy.

The Foreign Ministry said the talks that began Tuesday will be led by State Department official Timothy Betts on the U.S. side and Chang Won-sam on the South Korean side.

The State Department said at the outset of the current negotiations in March that South Korea has provided about $830 million per year, or about half the total cost, under the current Special Measures Agreement.

South Korea has helped offset the costs of stationing U.S. forces on the peninsula under an SMA since 1991. “Both delegations are committed to developing an agreement that strengthens the U.S.-(South Korean) alliance and that ensures the security of (South Korea) and its people,” it said.

The funds cover much of the cost of local labor, logistic and South Korean-funded construction.

Some 12,000 South Koreans work for the U.S. military, according to the Korean Employees Union national president Choe Ung Sik.

He expressed concern about the impact of a furlough on a work force that already has been hit hard by the consolidation of most U.S. forces on regional hubs south of Seoul.

More than 200 union members had lost their jobs and 200 to 300 of them had been reduced from full-time to part-time or temporary work, Choe said Monday in a telephone interview.

He called on the South Korean government to take full responsibility and make up the difference for the employees if they’re furloughed.

“They can’t make a living if they aren’t getting paid so it’s the same as losing their jobs,” he said. “If it becomes an issue it will likely cause problems for South Korea’s national security.”