US warns North Korea against tests during regime celebrations 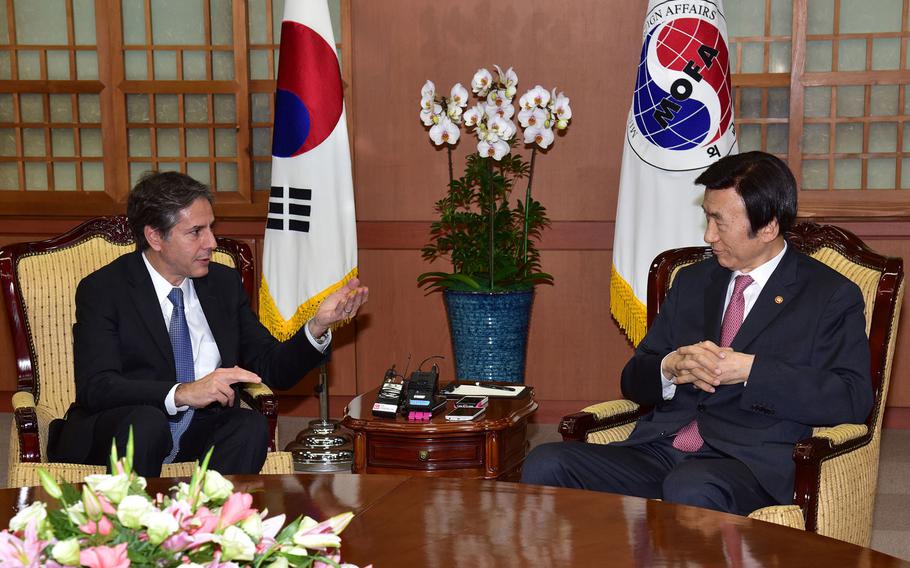 SEOUL, South Korea — A top U.S. diplomat warned Pyongyang on Wednesday that any rocket launch or nuclear tests conducted during this weekend’s key political anniversary would bring further international punishment to the regime.

“Any attempt by North Korea to launch a so-called satellite or test a nuclear device would be reckless, irresponsible and a clear violation of U.N. Security Council resolutions,” Deputy Secretary of State Antony Blinken said during a forum at the Asan Institute for Policy Studies.

North Korea has maintained in recent weeks the right to a peaceful space program, fueling speculation that it might conduct a rocket launch around the 70th anniversary celebrations of its ruling Worker’s Party on Oct. 10.

A U.S. research institute says that commercial satellite imagery shows no preparations for any missiles tests or satellite launches. But the possibility of an impending North Korean launch has been taken seriously by South Korean and U.S. officials, who have warned Pyongyang against doing so.

Blinken called for Pyongyang to return to denuclearization talks, pointing to Washington’s nuclear deal with Iran as a demonstration of U.S. willingness to engage in talks if the North is ready for “authentic and credible negotiations.”

His visit to Seoul comes as South Korean President Park Geun-hye prepares for a meeting next week with U.S. President Barack Obama in Washington. North Korea will be at the top of that meeting’s agenda, Blinken said.

He praised the allies’ response in August to a land mine explosion in the Demilitarized Zone that maimed two South Korean troops.

An investigation determined that the North had planted the land mines, which led to a ratcheting up of tensions between the two Koreas and the resumption of propaganda broadcasts across the border. Pyongyang threatened to use military force if Seoul did not meet its deadline to halt the broadcasts, but three days of negotiations between the two Koreas averted a conflict.

Park had promised to retaliate forcefully to North Korean aggression.

“Our response was appropriately calm and resolute because of the trust and confidence that we built through our close coordination and President Park’s strong leadership,” Blinken said.

Blinken also addressed the thorny issue of South Korea’s distrust of Tokyo, particularly on the issue of the Korean “comfort women” forced to prostitute themselves to Japanese troops during its occupation of the Korean peninsula.

He said the U.S. hopes the issue can be resolved through dialogue leading to a “mutually agreeable solution, and one that promotes healing and sensitivity to the tragic plight of the comfort women.”

“I believe that is very possible, and I believe great strides have been made in the past six or eight months,” he said.

He said that the U.S. values Japan’s recent changes in its self-defense laws, which now allow its forces to defend close allies in combat. The move away from a pacifist-only role for its military has been viewed with mistrust in South Korea, where memories of the brutal Japanese occupation are still vivid.

Blinken said the expanded role of the Japanese military “will be good for the security and peace and stability of the region, including South Korea.”

“The United States has a clear strategic interest in the strongest, most positive relationship possible between South Korea and Japan,” he said.