US viewed favorably in most countries, Pew survey finds 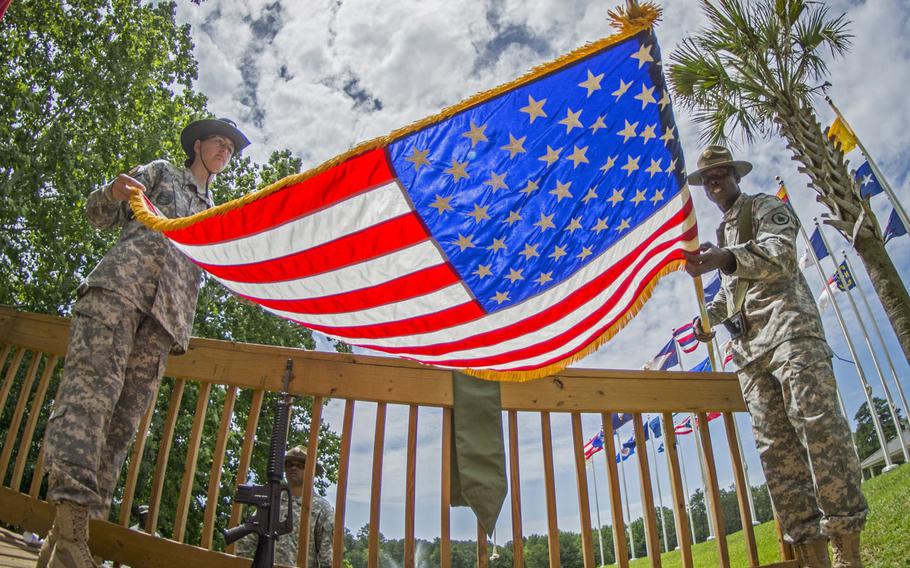 YOKOTA AIR BASE, Japan — The latest survey on global views of the United States generally shows positive opinions, with support for military action against the Islamic State group and the rebalance of U.S. forces to the Pacific.

America gets similarly high favorability ratings among European countries, which have been dealing with a resurgent Russia for the past year.

A Pew Research Center survey of people in 40 countries found broad global backing — 69 percent of those polled — for U.S. military action against the Islamic State.

And while the global community supports the airstrikes, President Barack Obama’s handling of the crisis isn’t as well-received at home: Fifty-four percent of the American public disapproves of the U.S. action against the Islamic State, the Pew survey found.

Results for the survey are based on telephone and face-to-face interviews. No overall margin of error was listed in the report, but the margins of error ranged from 2.8 percent in Ukraine to 4.3 percent in Turkey, Israel and the Palestinian territories.

China’s assertiveness — it claims much of the South China Sea as its territorial waters — might be a significant reason for the U.S. popularity in the Asia-Pacific region.

The poll shows half, or more, of the people surveyed in Vietnam, the Philippines, Japan, India, Australia and South Korea are in favor of a greater U.S. military commitment to the region because it could help maintain peace. Malaysia is the only Asian nation where more than half — 54 percent — of those polled oppose the pivot because it could lead to conflict with China.

The American public’s feelings about the pivot are less clear. Only 47 percent support sending more military assets to Asia, with 43 percent opposed. Americans support the Trans-Pacific Partnership (TPP) 49 percent to 29 percent, with a quarter offering no opinion.

The pact, still under negotiation, is the pivot’s main economic component and would be the largest trade deal in U.S. history. It involves the U.S., Japan and 10 other countries that combine to make up 40 percent of the world’s economy.

China views America with suspicion, the poll suggests. More than half of Chinese believe the U.S. is trying to stop China from becoming equally as powerful — with less than a third saying the U.S. accepts that China will, eventually, become its equal.

Ralph Cossa, of the Pacific Forum think tank, said the poll’s results in Asia reflect good work by U.S. officials of explaining the rebalance, along with key U.S. officials’ visits to the region. Asian reaction to Chinese assertiveness is also a factor, he said.

“When you are feeling insecure you want to make sure that, when you dial 9-1-1, someone is going to answer,” Cossa said.

Seventy-one percent of those polled in Vietnam and the Philippines say more U.S. military resources in Asia would be a good thing.

“The Philippines and Vietnam have three things on their mind — China, China and China,” Cossa said. “That makes the [U.S. Navy’s] 7th Fleet look all the better.”

There’s also considerable support in Asia for the TPP. Roughly half or more of those polled in seven of the nine TPP nations believe the agreement would be a good thing.

However, support for the U.S. doesn’t stop people in Asia from valuing their relationship with China. In Australia and South Korea, for example, people rate economic ties with China as more important than those with the U.S.

In Europe, the U.S. receives largely positive reviews among many of its key NATO allies, the survey found. America is viewed favorably among a majority of Italians, French, British and Spanish, according to the poll.

The outlier is Germany, where just 50 percent give the U.S. a positive rating, compared to 45 percent with a negative rating, according to Pew.

America’s image has become more negative in Germany over the last few years. According to the survey’s findings, 62 percent of Germans gave the U.S. a favorable review as recently as 2011.

Germans’ views on how to deal with Russian aggression in Ukraine might play a role in the latest findings. While many NATO nations support an increased alliance presence in the Baltics and eastern Europe as a deterrence to Russia, many Germans — to include Chancellor Angela Merkel — are less enthusiastic.

In the conflict-ridden Ukraine, 69 percent have a positive opinion of the U.S., although there are notable differences between the nation’s western (78 percent) and eastern (56 percent) regions, according to the Pew survey. In the last year, pro-Russian rebels in the east took up arms against the pro-Western government.

The conflict has also led to a dramatic increase in anti-American sentiment in Russia — only 15 percent of Russians have a positive view of the U.S. today, down from 51 percent two years ago, before the outbreak of violence, the survey found.