US vets in the Philippines shrug off drug-war tensions 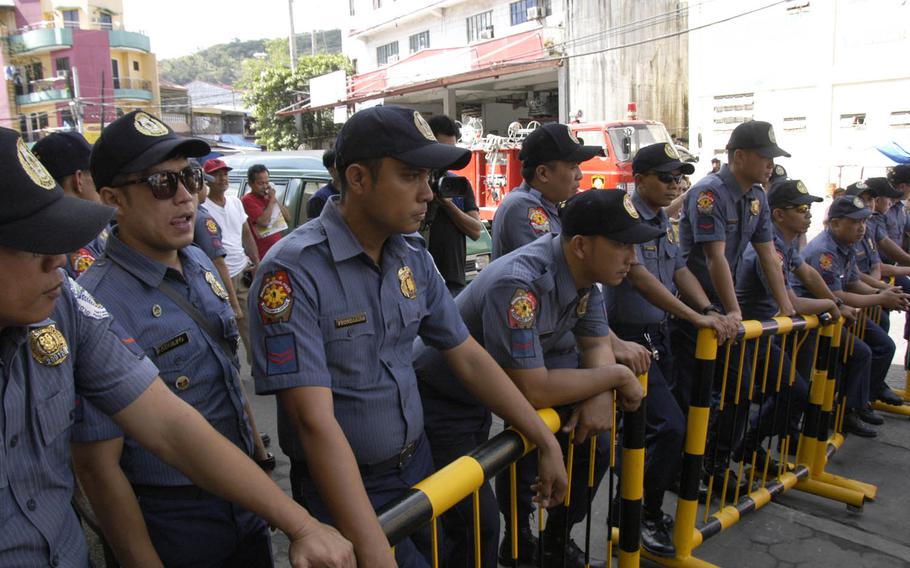 Police are seen in Olongapo City, Philippines, last year. U.S. veterans living in the Philippines say friction between Washington and Manila over extrajudicial drug-war killings hasn't had much impact on American expatriates there. (Seth Robson/Stars and Stripes)

U.S. veterans living in the Philippines say the new president’s bloody law-and-order crackdown has resonated with a populace that is tired of crime and supportive of him bluntly telling the world, including former colonial power America, to butt out while the country cleans house.

The retirees also are happy that friction between Washington and Manila hasn’t trickled down to them, with citizens separating their resentment for the U.S. government from how they feel about Americans who have chosen to live near former U.S. military facilities, such as U.S. Naval Base Subic Bay and Clark Air Base.

“They have problems with the American government, but they don’t have a problem with us individually,” said John Gilbert, 69, a retired Army first sergeant and commander of the Angeles City Veterans of Foreign Wars Post. “That’s the way we’d like to keep it.”

New Philippines President Rodrigo Duterte has clashed with President Barack Obama because of killings — either in shootouts with police or by vigilantes — that have so far claimed the lives of about 3,000 people, leaving bodies on the streets of major cities.

During the G20 summit earlier this month, Duterte used a Tagalog phrase that translates roughly to “son of a whore” when asked how he’d react if Obama brought up human rights concerns over the drug-war killings during a one-on-one meeting. Obama canceled the meeting after hearing about the insult.

When European Union officials brought up the issue last week, Duterte again used obscenities and accused them and Obama of hypocrisy for raising concerns about his crusade against crime while dropping bombs that have killed innocent people in the Middle East.

U.S. veterans say the root cause of crime in the Philippines is poverty. The economy has grown more than 5 percent on average over the past decade, according to the World Bank.

“You have a middle class in the Philippines that never used to exist,” Gilbert said. “It’s a greater period of change than since the Spanish came or [America] came.”

However, along with modern shopping malls, fast-food restaurants and smartphones, more than a quarter of the populace still live before the poverty line, and the country has seen a blight of drugs, including crystal methamphetamine known locally as “shabu.” In 2012, the United Nations said the country had the highest rate of meth abuse in East Asia.

“Drug crime was a big problem,” Gilbert said. “It didn’t affect those in power so they didn’t care. It was a lower-class problem, so the folks in Manila ignored it.”

The drug problem fueled other crimes such as purse-snatching, armed robbery and a sense of lawlessness, he said.

“You have to be constantly on guard,” Gilbert said. “My daughter had her laptop stolen by a guy who rolled up on a motorcycle. Put your wallet in your front pocket and don’t wear a wrist watch.”

Most Filipinos aren’t involved in criminal activity, he said.

“They just want to be left alone. A government that promises a degree of order is pretty popular,” he said.

Duterte was elected in May after promising change, and that’s exactly what he’s brought, Gilbert said. Opinion polls show Duterte has the support of nine out of 10 of his people, and Gilbert thinks the criticism from foreign officials is counter-productive.

“The American government seems to want to play big brother to these people, and they are not in the mood for it,” he said. “Our ambassador got off on the wrong foot and [Obama] didn’t help. Now the EU is trying the same thing and not having much success. [Filipinos] have been colonized three times, and they don’t want somebody telling them what to do.”

Some of the media coverage of the drug war has been sensationalized, Gilbert said.

“The number of people shot versus the number arrested doesn’t appear to be a huge number,” he said. “The vigilante killings are low-level dealers and potential snitches. They are being killed by drug overlords to stop them from testifying. [The drug trade] is a very entrenched billion-peso business. It is no wonder that trying to eradicate it gets some violent reactions.”

The violence is concentrated in Manila, away from where many American expatriates live, Gilbert said. About 1,680 veterans have registered with the VFW post in Angeles city, near Clark, and another 450 in the Subic area.

“There are some places they have hit harder than others,” he said. “Manila, because of all the informal settlers and criminal element, was a good place to look for drug culture. They center a lot of their efforts on places where they knew [drug dealers] are.”

However, there has been some impact near Subic Bay and Clark.

Police recently raided a large Chinese-run drug laboratory near Angeles, they’ve made a number of arrests of local drug dealers and the government has released a list of officials being investigated for suspected involvement in the drug trade, Gilbert said.

“It hasn’t just been street-level folks getting targeted. They’re going after the kingpins as well,” he said.

Overall, the impact of the crackdown appears positive for the economy in towns near former U.S. facilities, Gilbert said.

“It hasn’t impacted the economy or business investment. There is new stuff going up all the time. If anything the perception of law and order has probably helped,” he said.

Anthony Grimm, 56, a retired Air Force master sergeant living in Angeles City, said he was warned about a neighborhood drug problem when he moved there in 1999 after a 20-year military career as a medic.

“We were warned not to move here because there were drug dealers,” he said.

The drug crackdown, which includes a youth curfew, has cleared young people from the streets around his home at night, he said.

But Grimm, who was stationed at Clark from 1982 to 1986, said he doesn’t support extrajudicial killings or violations of the rule of law.

“I don’t believe that people should just be killed. There is a judicial system to go through,” he said, adding that he’s glad local youth are back in their homes at night.

Grimm’s wife, Annie, said many local drug dealers had turned themselves in to authorities after being warned they would be killed if they stayed on the street.

“Our area is quieter than it used to be,” she said.

“There were robberies going on here but I’ve always seen the Filipino criminals as opportunists,” he said. “When your back is turned or your house is empty, they will take something.”