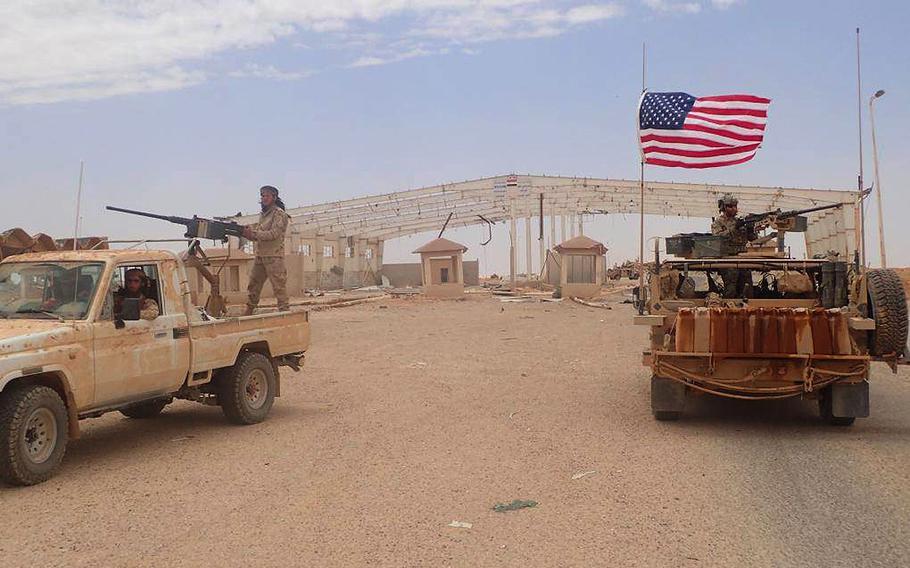 A U.S.-backed anti-government Syrian fighter form Maghaweer al-Thawra stands on a vehicle with heavy automatic machine gun, left, next of an American soldier, also standing on an armored vehicle, as they take their position at the Syrian-Iraqi crossing border point of Tanf, south Syria, on Tuesday, May 23, 2017. (Hammurabi's Justice News via AP)

WASHINGTON — The United States has bolstered its firepower at a small training base in southern Syria in recent days as a group of Iran-supported militiamen backing the Syrian government are encamped nearby and refuse to move, a military spokesman for the anti-Islamic State coalition said Thursday.

Despite repeated warnings, the small group of fighters about 17 miles northwest of the Tanf base have not moved outside the established non-conflict zone, which extends about 35 miles around the outpost near the Jordanian border, said Army Col. Ryan Dillon, spokesman for the Operation Inherent Resolve coalition. The U.S.-led coalition trains Syrian rebels to fight ISIS at the base.

The United States has used communication channels with the Russian military, which also backs Syrian President Bashar Assad, and an airdrop of 90,000 leaflets over the weekend to warn the fighters to move away from Tanf, Dillon said. The fighters belong to the same group that the United States attacked May 18 for moving too close to the Tanf base.

Dillon said there are “a couple hundred” coalition, including U.S. special operators and Syrian rebels at the base, and the coalition has also increased its airpower directly over the area to defend the base, as needed. He declined to detail the firepower added to the base in recent days. He also declined to say how many pro-government forces have gathered near the coalition base at Tanf.

In addition to the small group of fighters inside the non-conflict area, the coalition is also concerned about a growing formation of the militia on the edge of the zone, Dillon said. The United States has observed the militia, which Defense Secretary Jim Mattis recently described as “Iran-directed,” move fighters, tanks, artillery and other weaponry up to the border of the zone to the northwest of Tanf. Dillon said fighters also are patrolling along the non-conflict zone’s border to the north and east of the base and building fighting positions.

Despite concerns, the United States has not asked the militiamen outside of the non-conflict zone to move, Dillon said. They are primarily focused on convincing the fighters closest to Tanf to move.

The militia claims it is in the area only to fight ISIS, Dillon said. However, the coalition does not work with regime-aligned forces and does not want to operate so closely to the group, he said.

“We are just doing everything necessary to make sure that our forces are protected,” Dillion said. “We’ve made it very clear our position and what it is that we want from them and why.”

So far, the United States has not put a deadline on when the militia should move. It has also not directly warned the group that it would be attacked if it did not vacate its position.

But Dillon said if the group moves any closer to Tanf, the United States would see that as a direct threat, and he did not rule out a second airstrike.