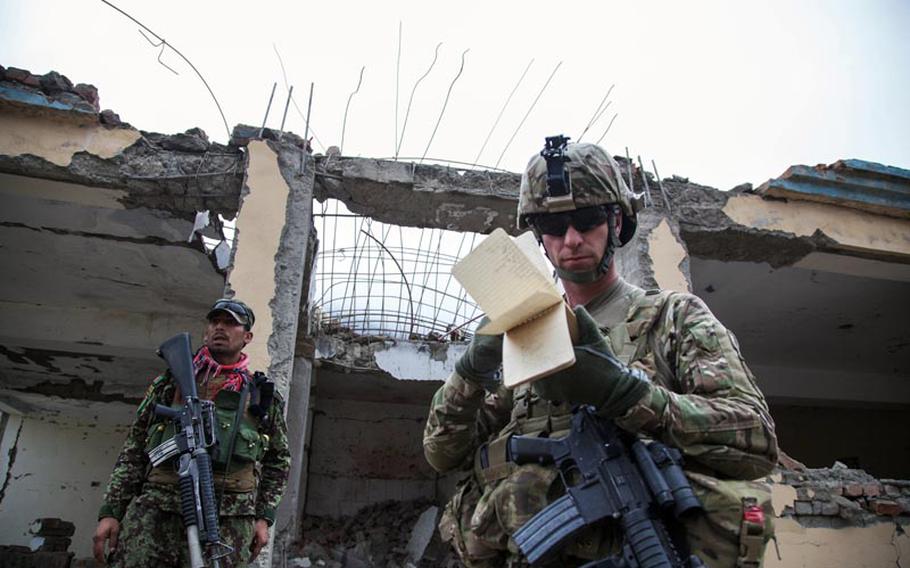 Afghan army Sgt Jamal Khan looks at pro-Taliban propaganda on the wall of a school insurgents bombed in 2008. (Matt Millham/Stars and Stripes) 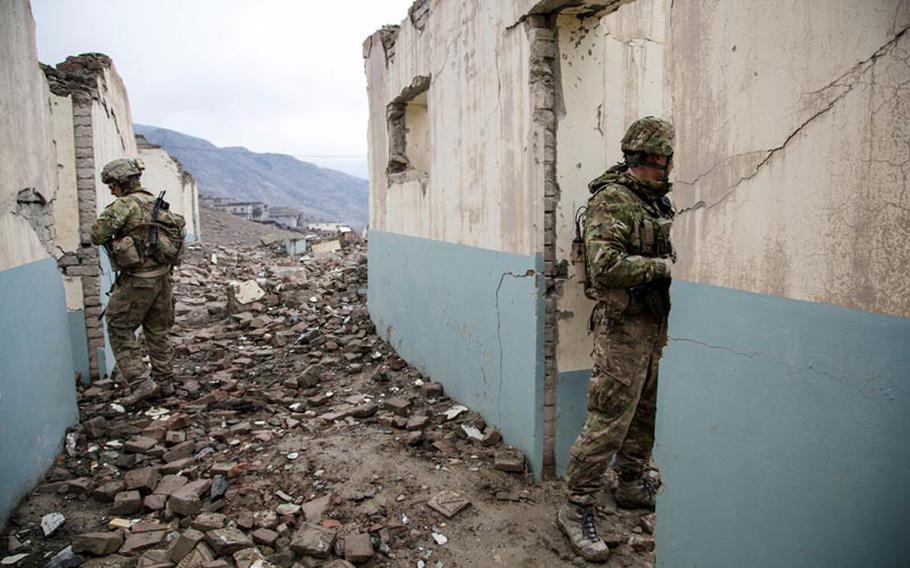 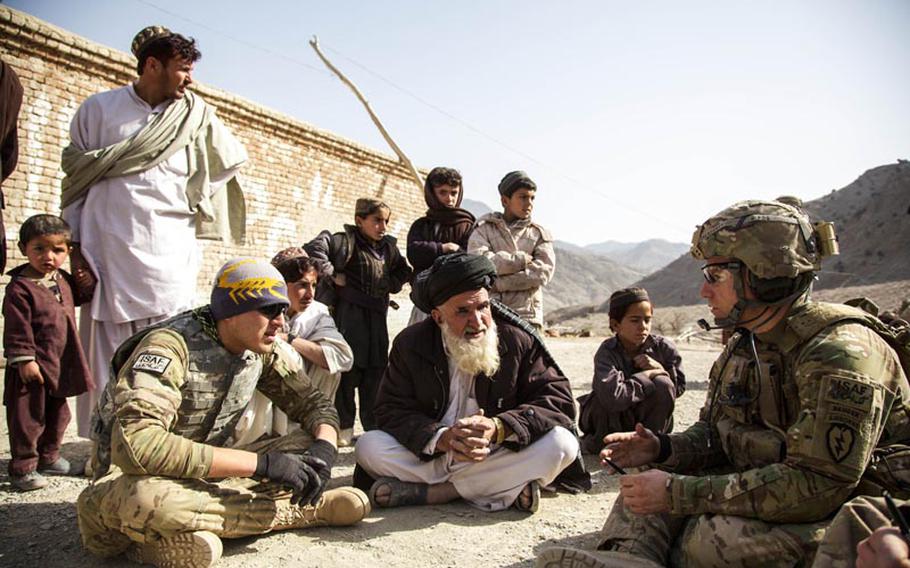 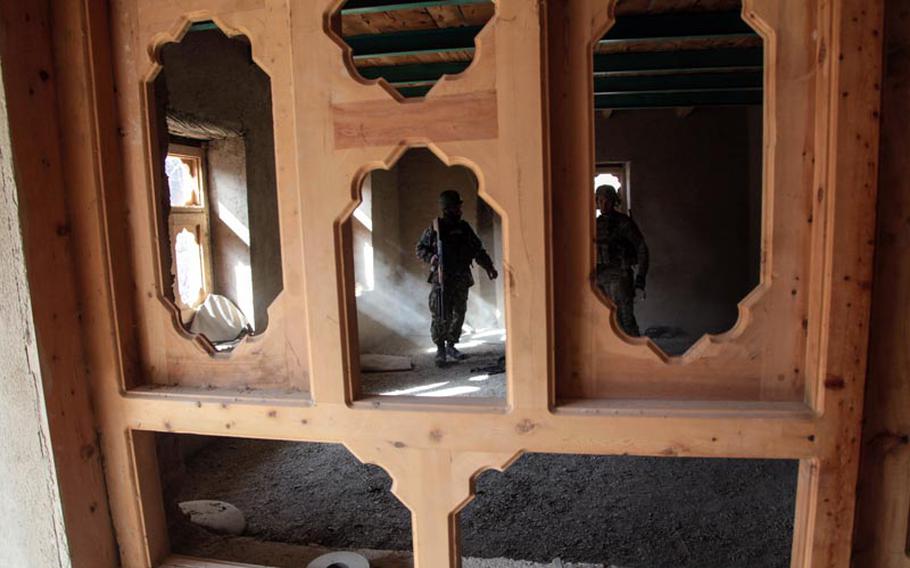 Soldiers of 3rd Platoon, Troop A, 1st Squadron, 40th Cavalry Regiment, prepare for a three-day mission to Sayed Kheyl, a remote village on the road between Khost city, capital of Khost province, and Gardez, the capital of Paktia province. (Matt Millham/Stars and Stripes) 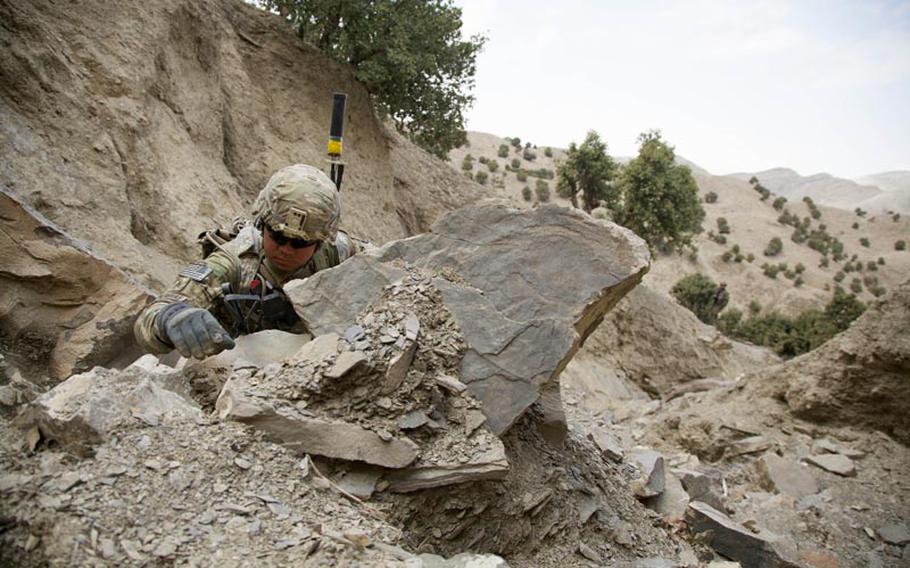 Workers carefully stack wood harvested from the hills around Sayed Kheyl. Firewood is the village&#39;s chief source of income. (Matt Millham/Stars and Stripes) 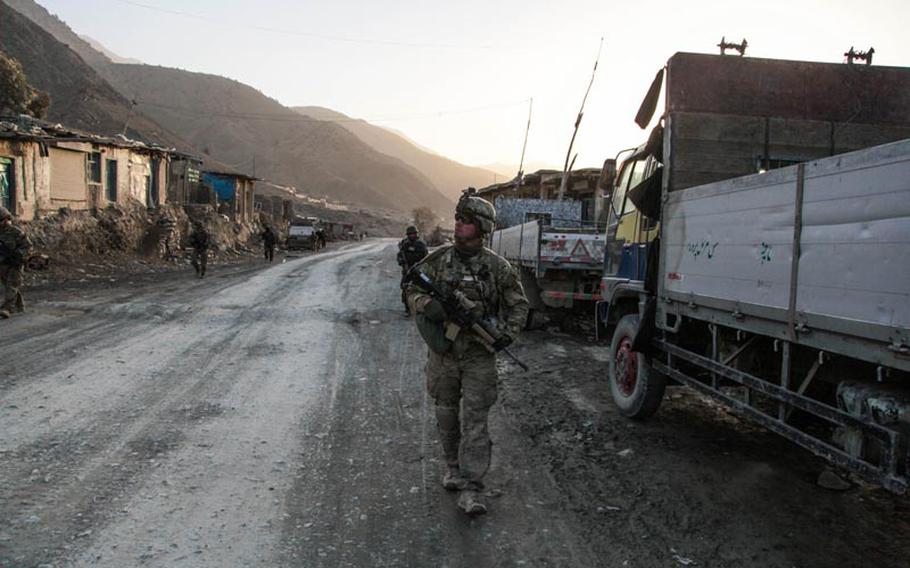 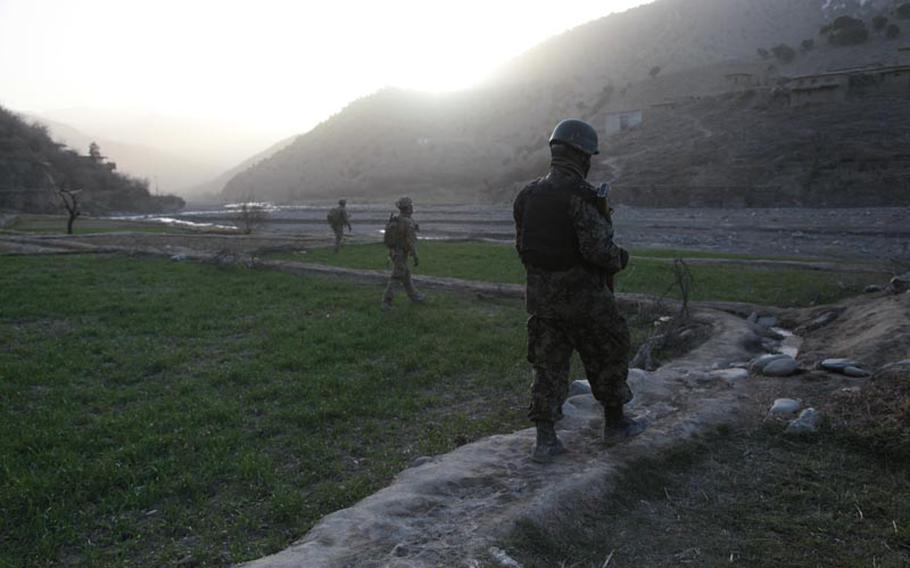 Afghan and American soldiers cross fields along the river in Sayed Kheyl during a patrol to search the homes of people suspected of militant activity. (Matt Millham/Stars and Stripes) 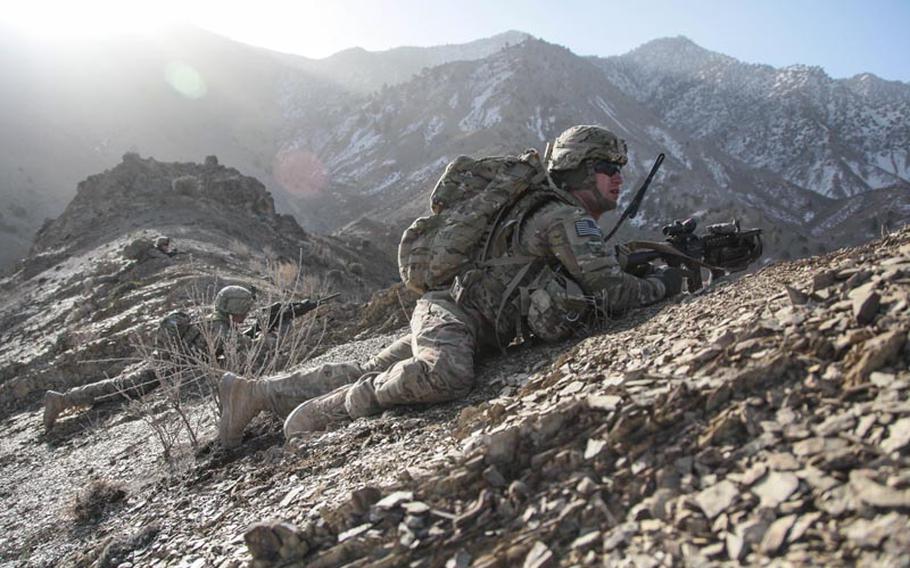 Sgt. Chris Ivy, 25, a team leader from Fayetteville, N.C., lays on a mountain crest to provide overwatch for an element searching homes in a wash below. (Matt Millham/Stars and Stripes) 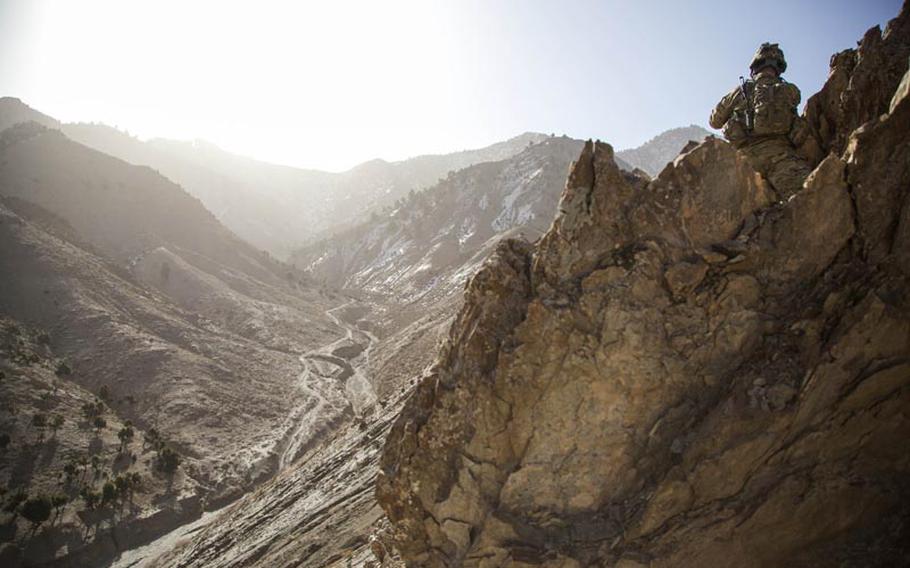 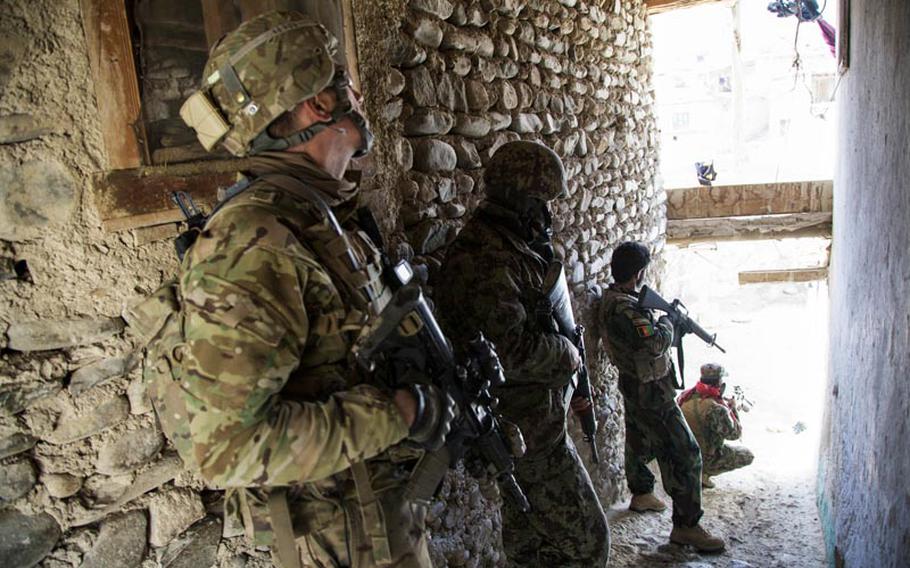 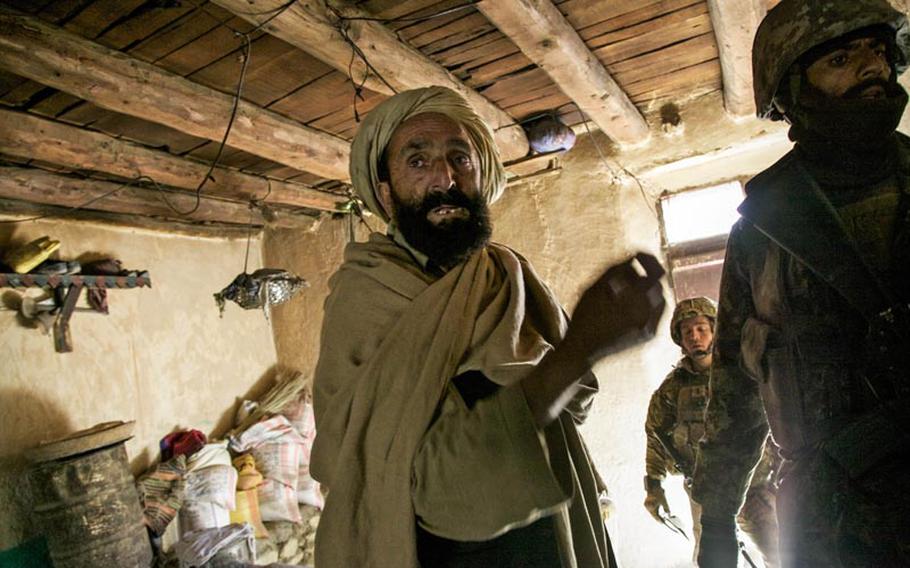 An elder protests as Afghan and American troops search his home in Sayed Kheyl, Khost province. (Matt Millham/Stars and Stripes) 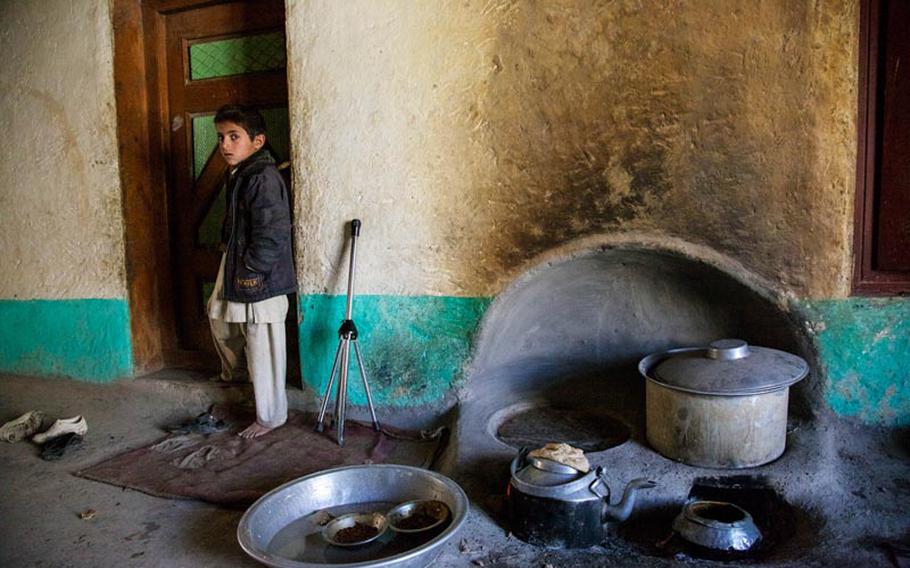 A boy watches as Afghan an American forces search his home in Sayed Kheyl, Khost. (Matt Millham/Stars and Stripes) 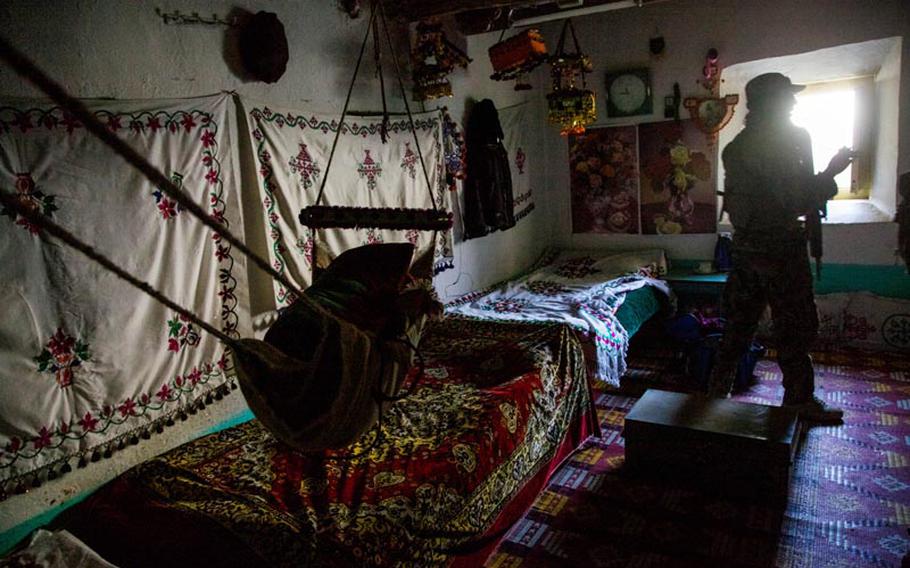 Afghan army Sgt Jamal Khan searches for weapons in a bedroom of a home in Sayed Kheyl. (Matt Millham/Stars and Stripes) 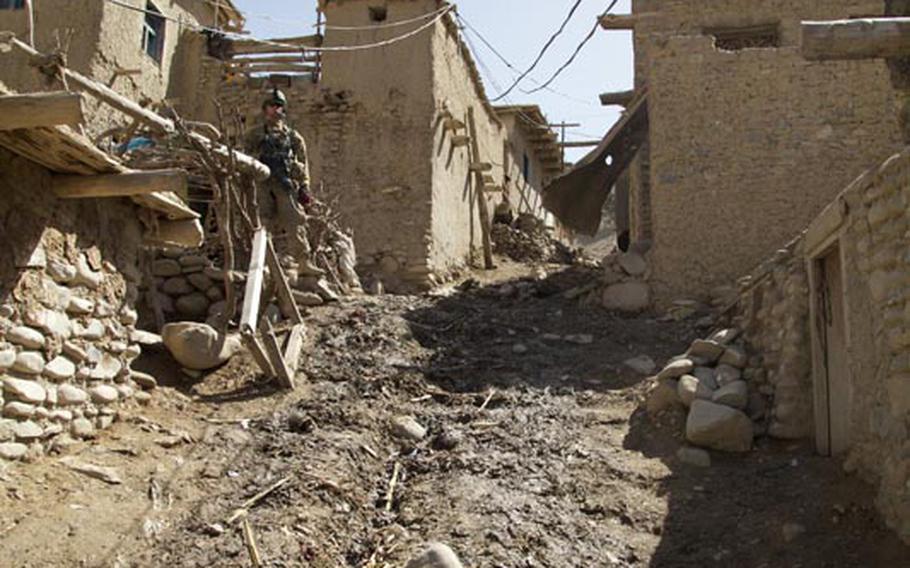 An American soldier stands watch about halfway down a muddy, garbage-strewn footpath in the village of Sayed Kheyl in Khost province. (Matt Millham/Stars and Stripes) 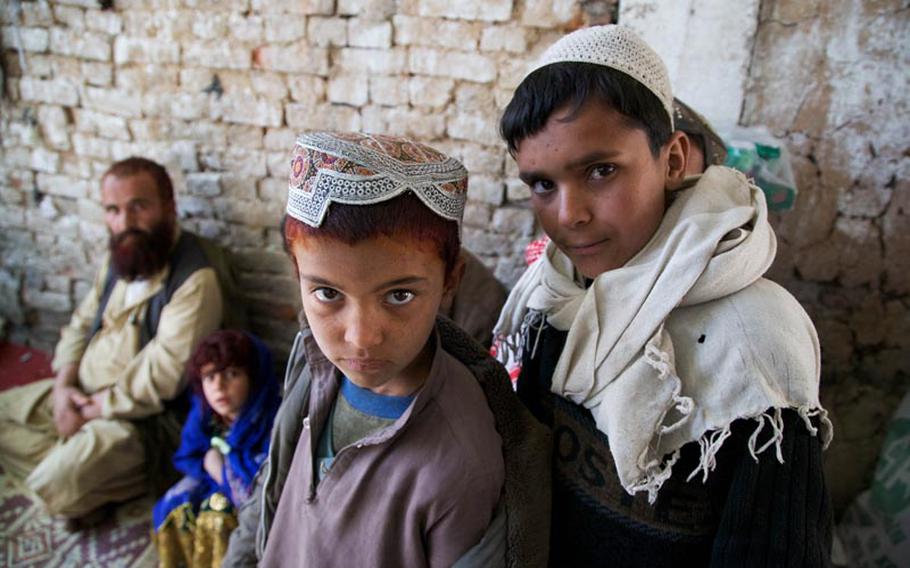 Afghan boys pose for a photograph during a patrol to gather information about shops in the Sayed Kheyl bazaar. (Matt Millham/Stars and Stripes) 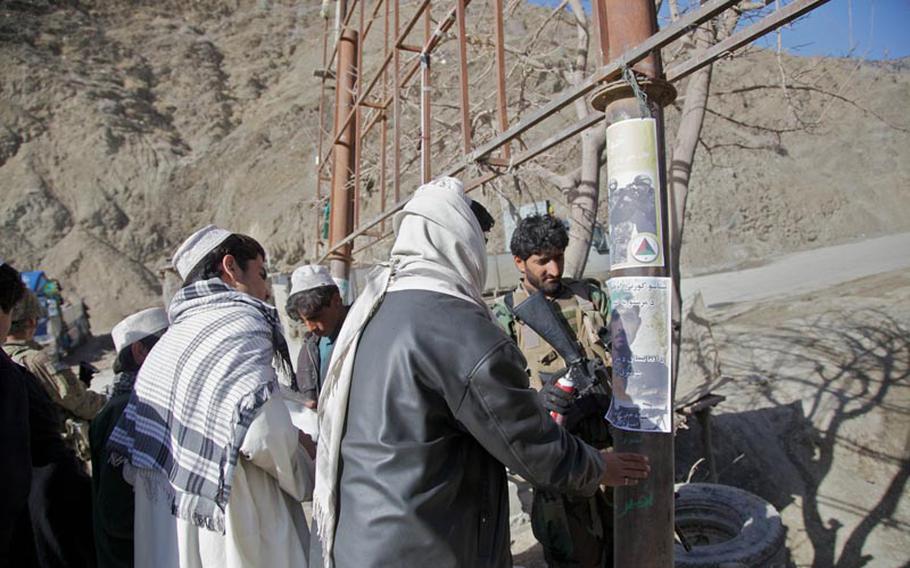 Villagers help Lt. Sayeed Mahmoud post pro-Afghan army posters on a billboard pole. A pro-army banner posted on the billboard was recently ripped down, but nobody knows by whom. (Matt Millham/Stars and Stripes)

SAYED KHEYL, Afghanistan &mdash; Sinah Gul sat on the ground outside his home, tossing pea-sized pebbles into the dirt. A handful of American soldiers sat beside him, across the river from a pair of bombed-out coalition aid projects, urging the white-bearded man to attend development meetings with the district governor.

An elder with three grown sons and a sprawling extended family, Gul smiled as the words were translated. Then, as many are prone to do when offered help in this remote nook of Khost province, he declined.

After pitching the idea a couple more times with the same result, 1st Lt. John Orendorff shook hands with Gul and pressed on with his patrol.

&ldquo;My [commanding officer] has pretty much told me, &lsquo;Look, you are going to concentrate on this village, and that&rsquo;s what your job is for this deployment,&rsquo;&thinsp;&rdquo; said the sandy-haired 23-year-old Philadelphian.

After years of U.S. development work intended to raise support for the Afghan government, residents of this grungy truck stop of a village remain uncooperative, and all that remains of a U.S.-built school and health clinic is rubble.

According to American officers, persuading Sayed Kheyl&rsquo;s residents to back their government is key to bolstering long-term security on the only major road that connects Khost province to the rest of Afghanistan.

A bridge over the Shamul river at the village&rsquo;s western end is a critical link for provincial commerce and coalition convoys, which roll over its concrete spans daily. It too has been the target of insurgents.

The Americans say tribal allegiances and isolation have led to internecine violence and a fierce sense of independence, which have stymied U.S. and Afghan efforts at outreach.

American officers also acknowledge there never has been a long-term coalition or Afghan security presence in the village, and that backing the government is risky for residents in an area infested with insurgents and militant sympathizers.

Lt. Col. Chris Cassibry, commander of the American cavalry squadron overseeing operations in the area, said the village&rsquo;s geographic isolation in the Khost-Gardez Pass has led to a &ldquo;frontier mind-set,&rdquo; a go-it-alone outlook that makes it difficult to convince the people that the government has anything they need.

The village, a steep maze of stone and mud homes, has existed for decades, perhaps much longer, without government assistance. They do have their warlords.

More than half the residents are aligned with a son of Haqqani Network founder Jalaluddin Haqqani; the rest follow Pacha Khan Zadran, a Haqqani nemesis and warlord who twice laid siege to the capital of neighboring Paktia province.

Both factions make their living collecting firewood out of the surrounding mountains, and disputes over who gets to cut what are frequent.

&ldquo;If they ever realize there&rsquo;s enough trees out there for everybody, then it&rsquo;d be awesome,&rdquo; said Orendorff, leader of 3rd Platoon, Troop A, 1st Squadron, 40th Cavalry Regiment, which pops into the village about once a month on multiday missions to seek support and root out militants and weapons caches. &ldquo;It&rsquo;d make our lives a lot easier.&rdquo;

The district&rsquo;s sub governor, a transplant from another district, has worked hard &ldquo;to get some kind of unity just within the actual district,&rdquo; Orendorff said. &ldquo;But they really don&rsquo;t want any part of it, to be honest, from what it seems like.&rdquo;

He hasn&rsquo;t given up hope that the two sides will reach a detente or that the governor will prevail in his attempts to build an inclusive district council before fall, when his unit redeploys.

That hope is undercut by the reality of what American and Afghan military commanders believe is needed to turn things here around: more forces and more time.

There are no plans to send more coalition forces. &ldquo;And Napoleon said you can ask for anything but more time,&rdquo; said Cassibry, commander of the squadron, which is part of the 4th Brigade, 25th Infantry Division.

The unit is unsure about the size of the unit replacing it, or whether it will be replaced at all as U.S. forces continue to draw down.

His best hope for winning over the mountain town is a new Afghan army base, which has been under construction for more than half a year.

The previous American unit here hired a local contractor to build the base, but just one platoon out of the company that&rsquo;s supposed to be here has moved in, and there&rsquo;s no space for more forces.

Staff Sgt. Bryan Parker, 29, 3rd Platoon&rsquo;s senior scout from Anchorage, Alaska, said American engineers built a similar-sized base in six days during his last deployment to nearby Spera district in 2009, and he&rsquo;s frustrated by the delay.

Cassibry is looking for ways to speed the construction, but wouldn&rsquo;t talk about contracting issues, including the possibility of terminating the contract and hiring another company. American engineers aren&rsquo;t available to finish the base, he said.

In the meantime, the Afghans won&rsquo;t patrol beyond the bazaar without more men or U.S. forces to back them up for fear of enemy contact, said Lt. Sayeed Mahmoud, the Afghan commander at the new outpost.

&ldquo;They (the villagers) call this place Waziristan,&rdquo; Mahmoud said, referring to the lawless area of Pakistan where insurgent organizations are known to hide, train and recruit. &ldquo;It is a little Waziristan.&rdquo;

His understanding of what it will take to align the village with the government is the same as Cassibry&rsquo;s: an enduring, visible security presence. The people will follow whoever is most powerful, Mahmoud said.

He doesn&rsquo;t appear to share the Americans&rsquo; sense of urgency. His men have made no move to help in the base&rsquo;s construction, though they spend most of their time inside its unfinished walls. Mahmoud shrugged when asked when the rest of his company will move in.

&ldquo;The way we see it as Americans, we see it is laziness,&rdquo; Orendorff said. &ldquo;But to them, that&rsquo;s just their way of life, of taking things at their speed.&rdquo;

Once the rest of the company moves in and they start regular patrols and understand the problems here, &ldquo;I think the sense of urgency should start to click in,&rdquo; he said.

There are fewer acts of violence and intimidation in Sayed Kheyl than in some other parts of the province, Orendorff said, a fact that may contribute to the Afghans&rsquo; apparent complacency.

Militant groups generally try to keep attention away from their homes by carrying out attacks elsewhere, according to the lieutenant. But he believes the village is a major transit point for weapons and fighters moving into other parts of Khost and Paktia.

&ldquo;I can&rsquo;t tell you how many people that I&rsquo;ve shaken hands with that I know are working for the insurgents or the Taliban,&rdquo; Orendorff said.

Just as pressing a problem is internecine violence. Seven Haqqani-aligned elders were killed here last year, possibly as part of the ongoing Zadran-Haqqani feud, according to Cassibry.

Gul, who is aligned with Zadran, said Haqqani&rsquo;s supporters wouldn&rsquo;t think of carrying out such attacks on his family. If Zadran dies, he said, &ldquo;they will cut off our heads.&rdquo;

Most attacks the Americans have been able to pin on insurgents have been aimed not at the people but at U.S.-built infrastructure.

Life has gone on without those amenities. Gul and his relatives on the Zadran side have their own private school and madrassa. When they get sick, they buy medicine in the village bazaar or travel roughly 30 miles to Khost City, where there is a government hospital and a bazaar with doctors and pharmacies.

If they have any problems or disputes, Gul said they take care of them within the tribe. They don&rsquo;t need to talk to the government, he said.

Residents on the other side of the tribal divide tell Orendorff much the same thing.

The village is poor, making most of its living off firewood. Orendorff has tried to leverage that fact, recommending that elders attend development meetings with the district governor to spark some modicum of prosperity, which could open the door to broader cooperation on issues such as security.