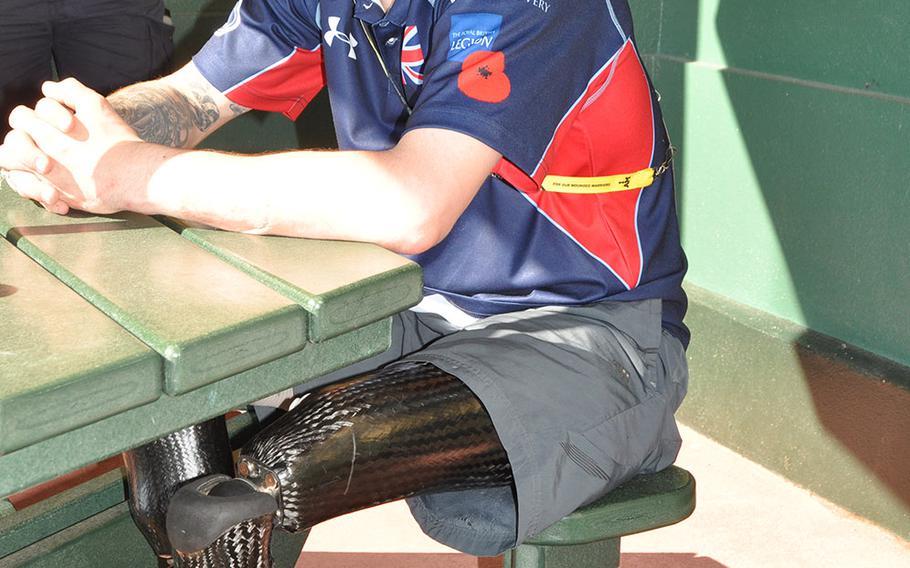 British double amputee Chris Middleton, a retired infantry private who lost both his legs to a bomb blast in Afghanistan in 2011, enjoys a moment in the shade at the Invictus Games Monday May 9, 2016. Middleto, who is on the wheelchair rugby and basketball teams, plans to take gold in Thursday's games. (Dianna Cahn/Stars and Stripes)

British double amputee Chris Middleton, a retired infantry private who lost both his legs to a bomb blast in Afghanistan in 2011, enjoys a moment in the shade at the Invictus Games Monday May 9, 2016. Middleto, who is on the wheelchair rugby and basketball teams, plans to take gold in Thursday's games. (Dianna Cahn/Stars and Stripes) 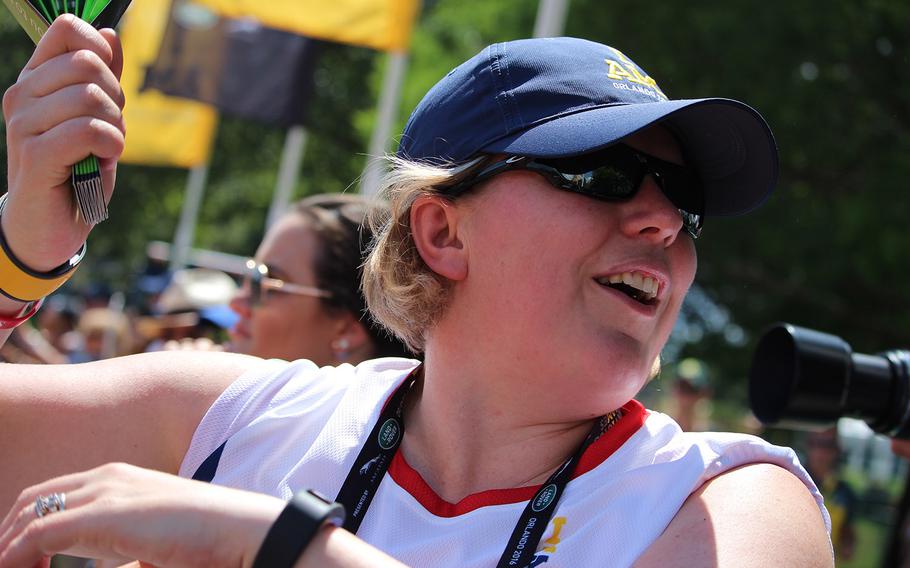 Fiona Gaffney, watches her husband Petty Officer Sean Gaffney of the Royal Navy throw the shot put during the track and field competition during the 2016 Invictus Games in Orlando, Fla. (Ken-Yon Hardy/Stars and Stripes)

ORLANDO, Fla. -- Forget the rivalry over rehabilitative sports. A battle brewing from across “the pond” is coming to a head here at the Invictus Games in the Sunshine State, and it’s about more than just athletic prowess.

This is about pride of nation, and of militaries -- and a duel between the British royals and the American first couple.

In early May, ahead of these games that began Monday for wounded, ill and injured servicemembers from around the world, the Obamas issued a challenge to Prince Harry on social media.

“Hey Harry, remember when you told us to bring it at the Invictus Games?!” First Lady Michelle Obama said in a video message.

“Be careful what you wish for,” President Barack Obama said. Behind him, servicemembers made faces and one made a motion as if he was dropping a microphone as he mouthed the word “boom.”

In response, Prince Harry issued his own video. It showed him browsing the Invictus catalogue with his grandmother Queen Elizabeth when the Obamas’ message arrived on Harry’s phone. “Boom. Really?” the queen said after watching it. “Please.”

Harry looked at the camera. “Boom,” he said with a smirk, motioning a drop of a microphone.

At the games this week at Disney’s ESPN Wide World of Sports, athletes and their families took up the challenge. In the resort where the athletes are staying, they exchanged “boom” messages -- on a lobby centerpiece signed by all the athletes and on large notepads on easels for each other’s country.

“You got laughed at by Queen Elizabeth. Boom,” said a message on the American board. “Good luck,” was added in parentheses.

A note on the British pad read: “America is going to beat you.” It had a smiley face and the added words: “Good luck. #Boom.”

With by far the two largest teams on the fields, Great Britain’s 100 athletes and the 115 representing the United States have a good-natured rivalry that permeates their matches.

It makes sense. The two countries took the lead in the wars in Iraq and Afghanistan. Thousands of American and British servicemembers were killed, and hundreds of thousands more came home with physical and mental wounds that they struggle to overcome.

It’s not only the cost of war that they shared. Prince Harry launched the Invictus Games in London in 2014, after he attended the Defense Department’s Warrior Games in the United States and saw the rehabilitative power of adaptive sports.

The competitions this week in Orlando are the second Invictus Games, and are marked by a distinct U.S.-U.K collaboration. The Invictus Foundation is British, but the chairman of the organizing committee for the games is Ken Fisher of the U.S. nonprofit Fisher House, which is a key sponsor, and the honorary chairman is former U.S President George W. Bush.

The militaries are close and here at the games, the combat wounded feel a sense of kinship with their brothers and sisters from “across the pond.” That also translates into a fierce rivalry.

“Yeah, it’s real,” U.S. team captain Will Reynolds, a retired Army captain who lost a leg in a bomb blast in Afghanistan, said of the rivalry.

“They are another country, but we see them as another service,” said Reynolds, who won two races Tuesday morning against U.K. runners in track and field, giving up the third to a British competitor. With more than 300 medals, it was difficult to declare dominance in the track and field races, but Reynolds was adamant: “Today, we turned the tables.”

Wheelchair rugby and basketball are also key to the U.S.-U.K. showdown. For retired Marine Corps Sgt. Anthony McDaniel, the Boom challenge was tangible as he prepared his team for the wheelchair basketball finals Thursday.

McDaniel wants to take the gold medal. He also wants to give the British team a comeuppance, after they beat the United States at the games in London in 2014. McDaniel wasn’t there, but he heard about it.

“They ended up beating us by two, so we got to give them a little taste of what they gave us there in London,” said McDaniel, who lost his left hand above the elbow and both legs to a bomb blast in Afghanistan.

Speaking after a team practice Tuesday, he said: “Hopefully, we will do a little bit more than two points to make a statement.”

The British weren’t taking any of that lying down. As far as they are concerned, they hold gold until proven otherwise.

“We are still the reigning champions,” retired Infantry Private Chris Middleton, also a double amputee from an Afghanistan bomb blast told Stars and Stripes early in the week. “The Americans are going to have to up their games” if they want to win.

Standing at the edge of the track Tuesday, Fiona Gaffney cheered her husband Sean throwing shot put. Her husband is a 27-year veteran of the British Royal Navy who lost his foot in a sporting accident and fought the Navy’s attempt to retire him. The aircraft engineer has since deployed to Iraq and Afghanistan, she said.

He’d already won two gold medals and a silver in power-lifting and rowing Monday, she said, adding the British dominated those sports, leading many of her countrymen to tease: “You said ‘bring it.’ You forgot it.”

But even as she said that, she cheered the American hand-cyclist as she crossed the finish line to take the gold. Up in the stands, Prince Harry sat with the crowd, watching the competition. He’s spending the week here and trying to get out a message that these athletes know all too well: the invisible wounds of war are as damaging and devastating as physical wounds, and they must not be stigmatized.

Most of the athletes here played sports to recover their spirit. Now, they compete to win. But through the ribbing and the tough-minded competition, they never forget what brought them here.

“There’s a competitive edge,” British wheelchair athlete Middleton said. “But at the end of the day, we’ve all been through the same thing. It’s good to see them all improving and getting on with life.”