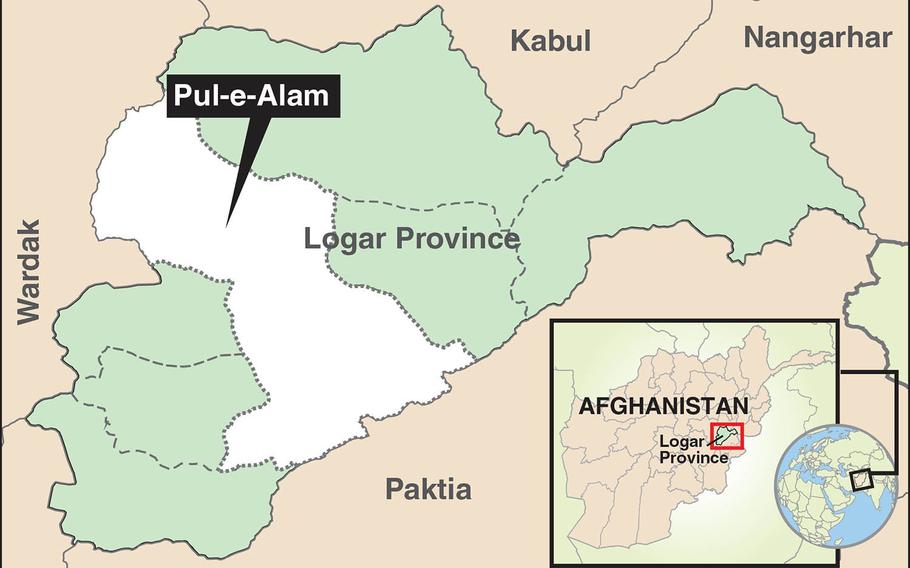 Buy Photo
A suicide bomber attacked a U.S. convoy at the gate of an Afghan National Army base on the outskirts of Pul-e-Alam in Logar province on Monday. (Bev Schilling/Stars and Stripes)

A suicide bomb attack on a U.S. convoy near a school Monday night in eastern Afghanistan did not harm U.S. forces but did result in civilian casualties, officials said.

A U.S. vehicle sustained minor damage during the attack, a spokesman for the NATO Resolute Support mission said on Tuesday.

Resolute Support was aware of reports that civilians were killed and injured in the blast but was unable to confirm the number of casualties Tuesday.

“If true, our thoughts go out to the families of the innocent, who continue to suffer needlessly from the Taliban’s violence and their refusal to listen to the call of the Afghan people and take the courageous step towards long-lasting peace,” said Lt. Col. Martin O’Donnell, U.S. Forces-Afghanistan spokesman.

One woman was killed, and three women and one child were wounded, an Afghan army spokesman said. But Haseeb Stanikzai, head of Logar’s provincial council, put the number higher, telling Pajhwok Afghan News that five civilians were killed.

Stanikzai told Pajhwok that U.S. forces were on the way back to their base after conducting operations in Mohammad Agha district.

Another attack in Logar killed eight people at a youth peace convoy Thursday, according to Tolo News.

The attacks followed the resumption of government operations against the Taliban. A short distance from the attack, Taliban and government forces had celebrated and taken selfies with one another during historic but brief joint cease-fires declared last month.

Monday’s bombing occurred hours after the U.N. Assistance Mission in Afghanistan issued a statement condemning a “recent spate of incidents in which civilians have been killed.”