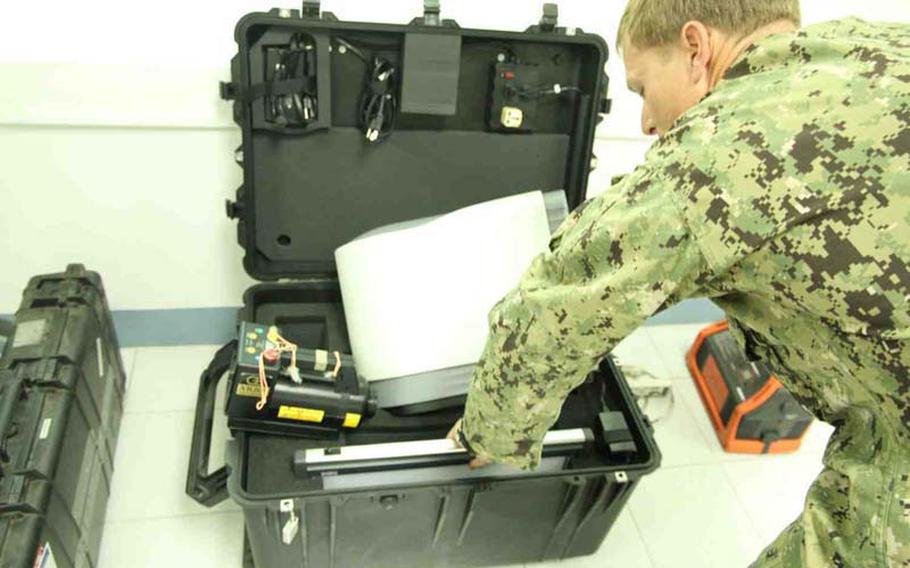 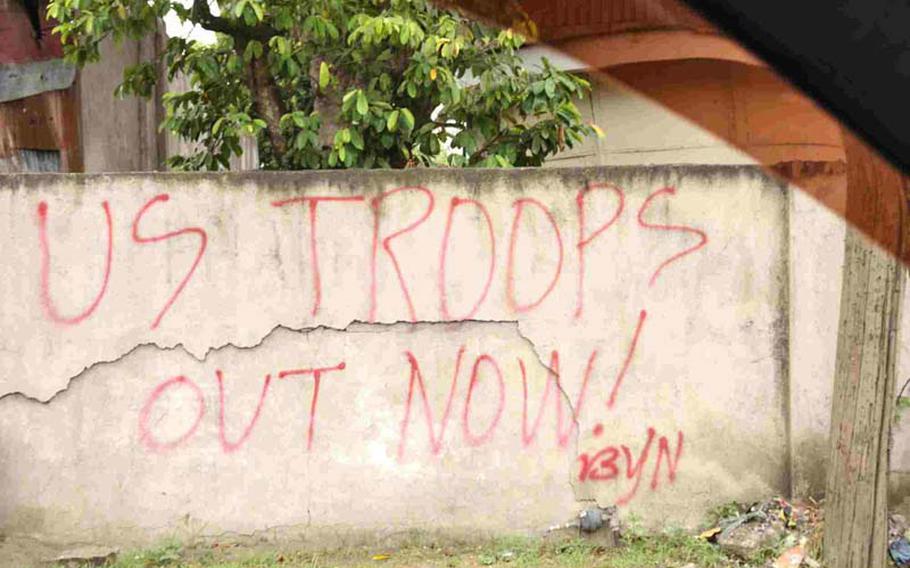 Graffiti near the front gate of Camp Navarro in Zamboanga urges U.S. troops to leave the area. Members of the U.S. task force at the camp keep a low public profile while advising the Armed Forces of the Philippines in its battle against transnational terrorist groups. (Wyatt Olson/Stars and Stripes) 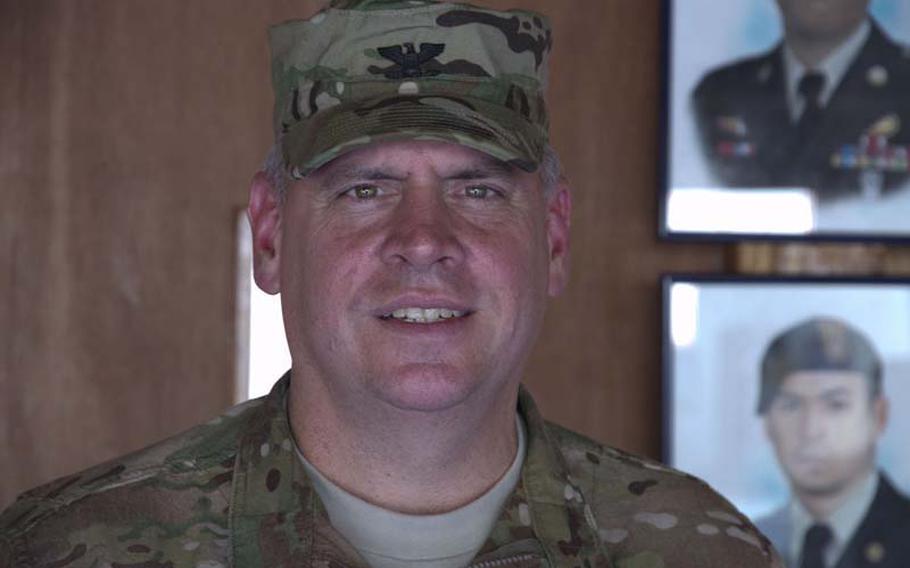 Col. Mark A. Miller, commander of Joint Special Operations Task Force-Philippines, stands in front of a memorial in Camp Navarro for two Special Forces soldiers killed by a roadside bomb in 2009. (Wyatt Olson/Stars and Stripes) 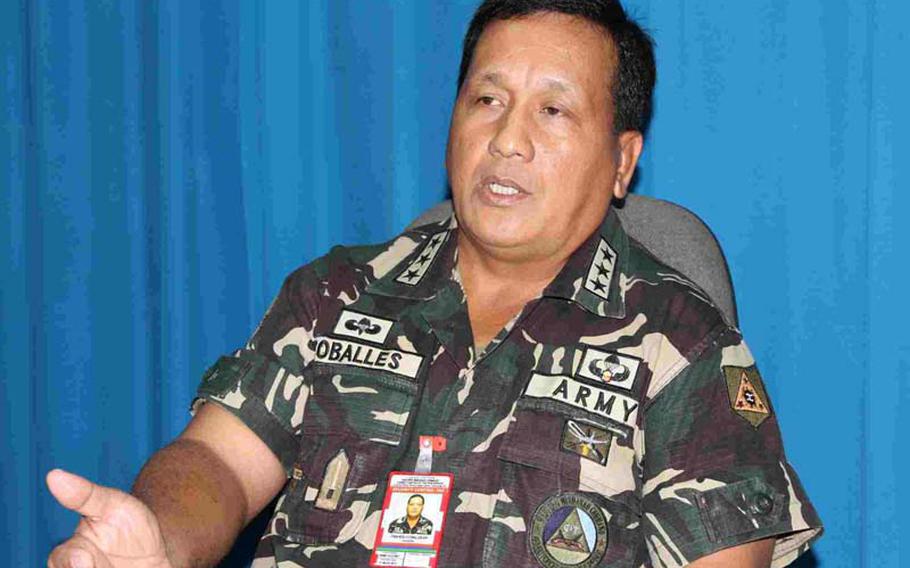 ZAMBOANGA, Philippines &mdash; A year after the Sept. 11 attacks, the U.S. joined the Philippines&rsquo; battle against al-Qaida-linked groups in the country&rsquo;s impoverished southern Mindanao region, calling it a new front in the war on terrorism.

A decade later, the number of terrorists has been winnowed down to a few hundred, their major leaders are dead and movements are confined primarily to the dense southern jungles on the islands of Jolo and Basilan.

The Philippine government recently expressed confidence that the last holdouts would be eradicated soon &mdash; an assessment more warranted than ever. It plans to turn over all terrorist-related operations now conducted by the Armed Forces of the Philippines to the Philippine National Police within four years.

As the security situation has improved, the U.S. military presence has declined, from a high of 600 troops on the ground in 2010, to about 400 today.

&ldquo;I think in Mindanao, you see that people are concentrating on livelihoods rather than security,&rdquo; said Joy Yamamoto, political counselor at the U.S. Embassy in Manila, referring to the country&rsquo;s Muslim homeland. &ldquo;I think 10 years ago you would have seen people much more worried about how they were going to be secure in their homes and communities. Now it&rsquo;s much more about improving their families&rsquo; lives, educational opportunities.&rdquo;

The streets of Zamboanga, once a stronghold for terrorist groups, are crowded with delivery trucks and shiny new SUVs. The oceanfront Paseo del Mar, a collection of trendy restaurants and bars, teems with upwardly mobile 20-somethings drinking San Miguel beer and listening to live rock bands.

Kiosks sell T-shirts emblazoned with the city&rsquo;s slogan, &ldquo;Asia&rsquo;s Latin City,&rdquo; adopted a few years ago in a bid for international tourists.

The seaside plaza&rsquo;s biggest nighttime draw is the dancing water fountain, which opened this spring financed by a half-million dollars in city funding. Timed to song and light, the gyrating water jets blast streams up to 90 feet in the air.

Not far away, shoppers throng the four floors of the downtown Mindpro Citimall for the likes of Bloomingdale&rsquo;s department store, Giordano and Guess. Others line up to see the latest Hollywood offering, &ldquo;The Bourne Legacy,&rdquo; at the six-screen cinema.

&ldquo;This has been a success story over here in the Philippines,&rdquo; said Col. Mark Miller, commander of Joint Special Operations Task Force-Philippines, established in 2002 after the al-Qaida-linked Abu Sayyaf group carried out a mass kidnapping at an upscale resort that included three Americans and dragged on for a year.

One of the Americans, Guillermo Sobero, was beheaded shortly after the abduction. Missionaries Martin and Gracia Burnham of Wichita, Kan., were dragged through the jungle the entire time. Martin was killed during the Philippine military&rsquo;s rescue effort that ended the saga. Gracia Burnham was wounded but survived.

Miller said the Abu Sayyaf and Jemaah Islamiyah &mdash; the latter has roots in Indonesia and carried out the deadly bombings on Bali that killed more than 200 people in 2002 &mdash; retain &ldquo;some leadership, but their ability to act in unison is not nearly as great as it was in the past.&rdquo;

While the main U.S. mission is to help an ally deal with a homegrown terrorism problem, it&rsquo;s also aimed at keeping the Philippines from degenerating into an extremist hotbed, given the country&rsquo;s past links to international attacks.

&ldquo;A lot of the plots that were hatched in the &rsquo;90s traced their roots or traced some transitory piece through the Philippines,&rdquo; Miller said. &ldquo;Either there was some planning conducted or it was a safe haven.&rdquo;

Those plots included the foiled Bojinka plan by 9/11 co-conspirators Ramzi Yousef and Khalid Sheikh Mohammed to assassinate the pope and blow up a dozen airliners over the Pacific with liquid explosives.

JSOTF-P&rsquo;s headquarters is a high-walled, secured square inside the AFP&rsquo;s Camp Navarro in Zamboanga. The camp-inside-a-camp is small, perhaps the size of half a football field, crammed with windowless living quarters that look like stacked shipping containers.

For security reasons, U.S. troops are not allowed to spend free time outside of Camp Navarro. Despite the growing sense of safety and economic growth felt by residents, foreigners remain kidnap targets by criminal gangs with links to terrorist factions. U.S. military hostages would be especially valuable for ransom.

The volatility of the region was evident in mid-September when about 3,000 Filipino Muslims burned U.S. and Israeli flags to protest the anti-Islam film that triggered large demonstrations and violence in other parts of the world.

In the Philippines, protesters carried placards saying, &ldquo;Americans are satanic&rdquo; and &ldquo;Israeli Jews ... enemy of Muslim Ummah (community),&rdquo; according to media reports. No Americans were injured.

During the protests, the AFP vowed to keep U.S. troops in the country safe. Elite units from the U.S. &mdash; SEALs, Green Berets, Marine Special Operations and others &mdash; are billeted at Navarro and other AFP outposts.

The U.S. troops have spent the past 10 years training AFP troops in ground tactics. Today, the AFP and national police are able to conduct much of that training on their own, Miller said.

The growing competency of Filipino forces also was on display during a recent visit to an intensive three-month training course for explosive ordnance disposal held near the southeastern city of General Santos, which has been the target of deadly bombings over the past decade, as have other Mindanao cities.

The annual course is financed by the U.S. State Department&rsquo;s Antiterrorist Assistance Program.

A road trip from Zamboanga to General Santos is a grueling 14-hour trek over mountains and the real possibility of running into a roadside improvised explosive device. JSOTF-P operates a small fleet of jets and two helicopters out of the Zamboanga airport that zigzag across the Mindanao region. Within a few hours they can reach any point where U.S. troops are operating, such as the islands of Jolo and Basilan, where the AFP has isolated most remaining members of Abu Sayyaf and Jemaah Islamiyah, both on the U.S. list of terrorist organizations.

Officers attending the training course had few distractions; it was being held in a remote hilltop police compound about 15 miles from the city&rsquo;s tiny airport. It was taught by three Filipino EOD experts who years earlier attended a similar class.

On this day, 30 camo-clad trainees were sitting around classroom tables designing and building IEDs out of household items. All men except for one woman, the students cut up cardboard boxes, aluminum cans and wires to fashion crude switches. Add a nine-volt battery and explosive, and they would be ready to go.

&ldquo;Tomorrow they go out and set them, and the other team tries to find and dismantle them,&rdquo; said Navy Lt. Casey McHenry, who heads the four-man U.S. EOD team in Mindanao and had spent the past couple days observing the class. The team is half the number it was during the JSOTF-P&rsquo;s early years.

McHenry and his team oversee the class curriculum and provide guidance and advice on teaching methods.

&ldquo;But ultimately it&rsquo;s driven by them,&rdquo; he said. &ldquo;We offer assistance when we can and observe a few classes or if we can provide materials for some of their practical exercises, but, ultimately, these guys have come a long way and they&rsquo;ve taken over. They&rsquo;re self-sufficient, which was always the goal.&rdquo;

Regardless of the improvement of Philippine military and police forces, lasting stability in greater Mindanao won&rsquo;t come by security forces alone, but will require more economic development and better governance.

JSOTF-P is just one part of the U.S. Embassy&rsquo;s Three-D approach to help stabilize the southern Philippines: diplomacy, development and defense.

U.S. agencies have been working on that second component in Mindanao for the past decade, spending about $365 million for development over roughly the past five years.

&ldquo;We&rsquo;ve had some success there,&rdquo; said Reed Aeschliman, deputy mission director of the U.S. Agency for International Development in the Philippines.

Studies have shown that there was less violence in areas where USAID had infrastructure and community projects than in other areas, he said.

Over the past year, the U.S. began a &ldquo;whole of government&rdquo; approach, initiating the Mindanao Working Group, which includes representatives from JSOTF-P, USAID, U.S. Department of Justice and others.

The strategy implemented over the past year is to sharply focus all development efforts on the half-dozen areas where conflict continues, Aeschliman said.

For example, a road-bridge project in the far-south island chain of Tawi-Tawi is expected to be boon for the local economy. The small island of Sanga-Sanga, on which Tawi-Tawi&rsquo;s airport is located, has always been the area&rsquo;s commercial center.

Most farming was done on the largest nearby island; goods and passengers had to be shuttled between them by small boats. With funding originating with the U.S. Department of Defense, a six-mile road and three steel bridges were recently completed to link the islands for the first time.

Still, as even the most optimistic admit, the southern Philippines remains a work in progress, with the rugged terrain and hundreds of miles of shoreline making the area difficult to police.

In late July, eight Philippine soldiers were killed on Basilan when they attacked an Abu Sayyaf encampment. Four more were ambushed and killed while on the road to join the fight.

Despite that, political counselor Yamamoto sees this as watershed moment for the Philippines.

&ldquo;We have a government that&rsquo;s very reform-focused and a president here who&rsquo;s seen as clean and honest,&rdquo; she said of President Benigno Aquino III, elected two years ago in a country where corruption has been endemic.

&ldquo;This has not been the case for many years before. He&rsquo;s someone who&rsquo;s trying to do the right thing by his people.&rdquo;