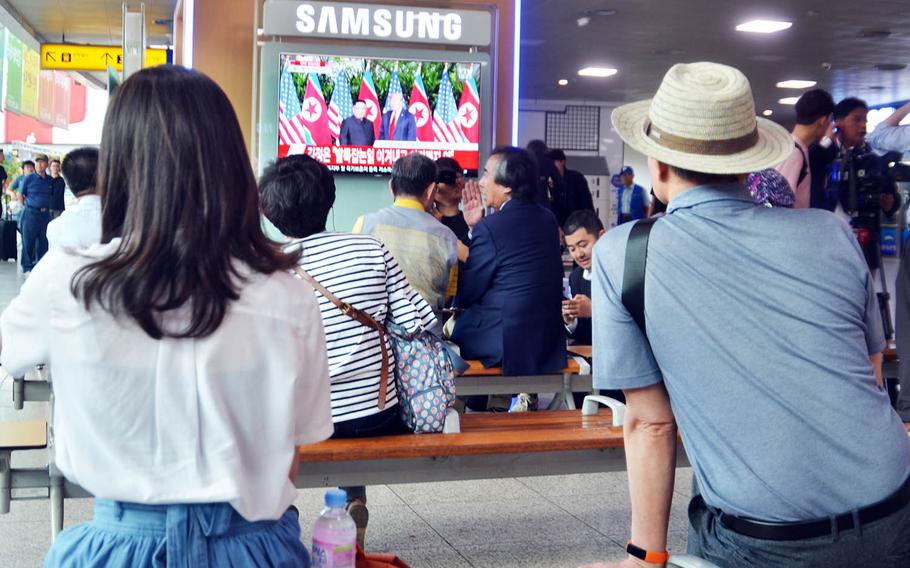 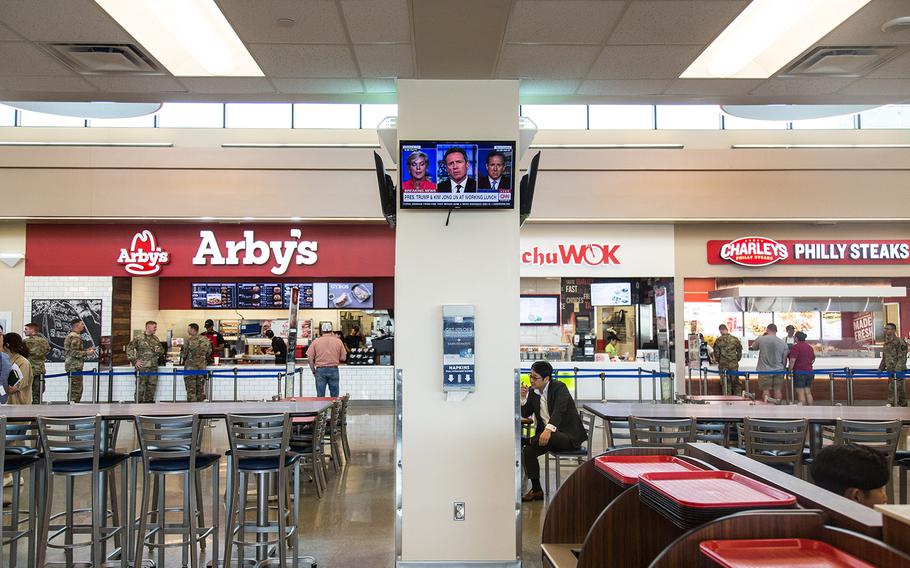 Most soldiers ignore a television playing news from the U.S.-North Korea summit in Singapore, at a food court at Camp Humphreys, South Korea, Tuesday, June 12, 2018. (Marcus Fichtl/Stars and Stripes)

At Camp Humphreys — the largest U.S. military base in South Korea — troops saw the leaders shake hands and speak to the reporters in Singapore via the American Forces Network.

“This conflict has been going since the early ‘50s and here, possibly in my lifetime, we could see the conclusion of it,” he said.

His wife, Sylvia Shelton, said she was nervous about going to Korea with her husband and prepared to evacuate at a moment’s notice last year, when North Korea test-fired three intercontinental ballistic missiles and conducted its sixth and most powerful underground nuclear blast.

Army Staff Sgt. Kane Clendenin, 28, of Savannah, Ga., read the news and discussed the summit with other soldiers before grabbing a snack at the food court.

“I’m hopeful. I think no matter which way it spins, it’s going to better our relationships,” he said. “Long term for us, we’ll probably see a drawdown [of U.S. troops] here if everything goes according to plan. I expect even if peacetime goes perfectly we’ll be here in strength for the next 20 years.”

Clendenin — who works in air-defense at nearby Osan Air Base — said his section controls the launch of Patriot and Terminal High Altitude Area Defense, or THAAD, batteries and would be the first called to action in the event of a North Korean missile strike.

“[The summit] affects our job, especially here so explicitly,” he said. “You ain’t got nothing to do but pay attention. It’s pretty much our number one focus.”

Clendenin said he hoped the summit would go well.

“I hope that it lessens tensions over here, I have my family over here,” he said.

Vietnam War veteran Manuel Salcedo, 69, watched the summit unfold at Yongsan Garrison in Seoul, where he’s lived since 1974. He said Trump’s pledge to halt joint war games with the South makes sense if North Korea follows through with denuclearization.

“But if they don’t we should restart the exercises,” he said. “It’s got to be mutual."

“I’m half Korean,” said Doolan, adding that his relatives fled from North Korea during the war.

“I’d like to go see where the Korean side of my family originated,” he said.

‘I want world peace’ South Korean President Moon Jae-in, who delayed a weekly Cabinet meeting to watch Trump and Kim shake hands on television, said “all the attention of our people is on Singapore.”

At Seoul Station in the nation’s capital, several hundred saw a live feed of the leaders’ historic greeting.

Son — who became a Korean Augmentation to the U.S. Army soldier tasked with driving a U.S. general around Yongsan Garrison after the war — said he thinks Trump is doing a good job.

The summit, he said, is a chance to avert a world war. But whatever its outcome, Son doesn’t think the Koreas should reunify, and he doesn’t want American forces to leave the peninsula.

“North Korea is always telling lies. Even now with the summit, we can’t trust them. They are demanding money from other countries but we must not give any money to the North,” he said.

U.S. Forces Korea must stay in the south forever, he said.

“Without USFK it’s like South Korea is opening the gate for other countries to attack America,” he said.

Retired barber Choi Soon Yong, 70, is too young to remember the Korean War, but he served three years of compulsory military service and is hopeful that his country will reunify.

“I want world peace,” he said. “I don’t want fighting, and I hope everything goes well during the summit.”

North Korea should dismantle its nuclear weapons and the two countries should embark on a step-by-step process of reunification, he added.

Park Joonja, 52, stopped to watch the summit coverage on her way to catch a train.

“Our country is the only divided country in the world. I would never have imagined such an historic thing as this happening today. I wish everything goes in the right direction.”

Park said she was impressed by Trump’s effort. If reunification happens, she said she’d like to travel to Pyongyang to see how people live up there.

Her daughter, daycare teacher Kang Youngjoo, 25, said the 7-year-old children she looks after study reunification, learning about how people in the North talk and dress.

“If there is any chance in the future I would like to travel to the North with my kids,” she said.