US troops prepare to back Iraqi push into west Mosul 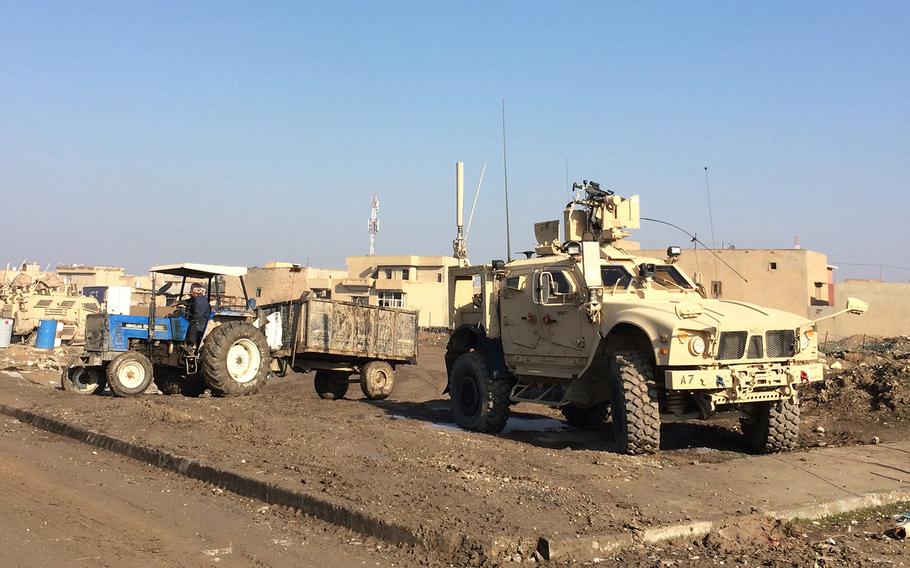 “They (the Iraqi troops) already know how to clear rooms,” said Sgt. 1st Class Bradley Thomas, 36, one of 1,000 soldiers from the legendary airborne unit that is advising and helping government forces battling the militants in Mosul.

The paratroopers, who have been in Iraq for a month, aren’t teaching the Iraqis new tactics for fighting in built-up areas. Rather, they’re providing tips that will help them limit casualties during what’s expected to be a tough battle in some of Mosul’s most densely populated and oldest neighborhoods, Thomas said.

“They want to be the ones doing it rather than having U.S. forces do it for them. We just give them input on how they can improve,” said Thomas, a native of St. Joseph, Mo.

“We are repositioning people,” in preparation for the push into the western half of Mosul, said Lt. Col. James Downing, the battalion commander.

Downing, 40, of Lewistown, Ill., and his soldiers took over the advise and assist mission from members of the 101st Airborne Division.

Some of the paratroopers initially occupied houses in Bartella, a Christian town on the outskirts of Mosul, alongside Australian and Iraqi special forces. However, Downing said his soldiers are now on the move to a new location.

The tall infantryman visited Mosul in 2004. His senior enlisted adviser, Command Sgt. Maj. Santos Cavazos, lost an eye battling insurgents there on a previous deployment, but the injury didn’t appear to have dampened his enthusiasm for the mission on a cold winter day near the battlefield.

Some of the battalion’s Mosul veterans spent time at Forward Operating Base Marez, which is still in enemy territory west of the Tigris River. But they don’t expect to see many familiar sights once the area is recaptured. Aerial images show the base has been destroyed beyond recognition, Downing said.

The airborne troops are focused on helping Iraqi security forces prepare for their final assault on the city, he said.

“The enemy has been heavily attritted,” he said. “They were handed a pretty heavy defeat (in eastern Mosul) and they are suffering from things like desertion.”

Iraqi commanders have learned from the hard fighting over the past few months and have devised a good plan to capture the rest of the city, Downing said.

“It could go a lot quicker (in the west), but it’s very complex terrain,” he said. “It’s an older part of town, and the population is denser.”

The airborne soldiers won’t see any action on the front line during the battle. Instead they will be coaching Iraqi officers, sharing intelligence and coordinating fire support, he said.

“The Iraqis are doing the fighting, and they are getting after it,” he said, adding that other Iraq veterans would likely be impressed at the skill and professionalism of the local forces.

“I’m certainly proud to serve next to them,” he said.