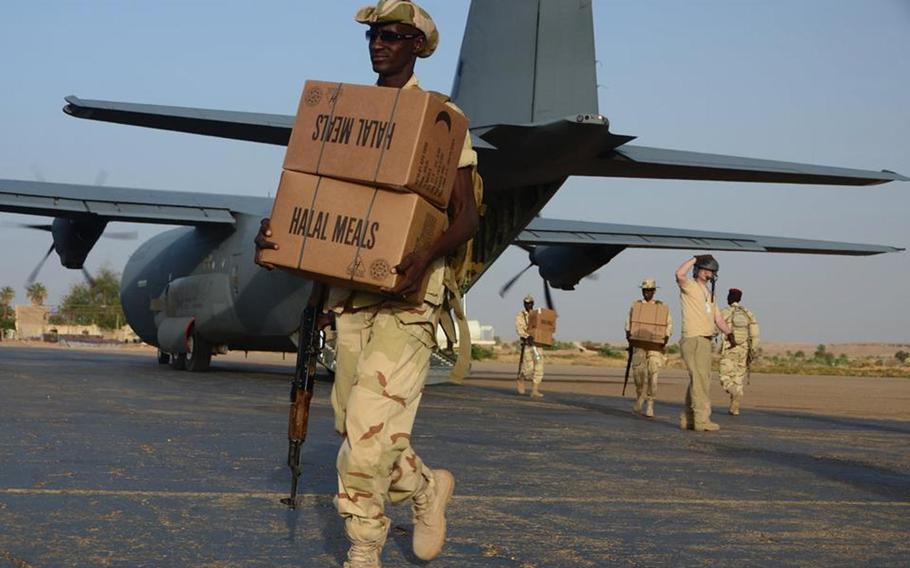 Chadian soldiers with the Special Anti-Terrorism Group unload a Canadian C-130 in Faya, Chad, Feb.17, 2015, during that year's Flintlock exercises. The 2017 edition aims to coordinate responses by west African countries to extremist threats such as Boko Haram. (Timothy Clegg/U.S. Army)

Chadian soldiers with the Special Anti-Terrorism Group unload a Canadian C-130 in Faya, Chad, Feb.17, 2015, during that year's Flintlock exercises. The 2017 edition aims to coordinate responses by west African countries to extremist threats such as Boko Haram. (Timothy Clegg/U.S. Army) 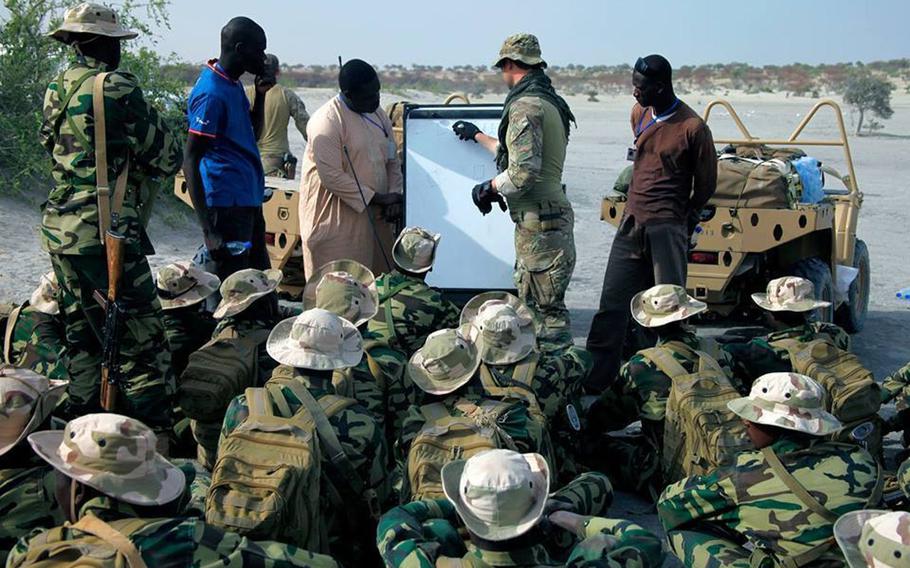 STUTTGART, Germany — In one of U.S. Africa Command’s largest exercises, a contingent of U.S. special operations forces is working alongside hundreds of troops in western Africa, a region threatened by the militant group Boko Haram.

This year, Chad is serving as the main host for the exercises, which also involve training events in Cameroon, Niger, Mauritania, Morocco and Tunisia.

Brig. Gen. Donald Bolduc, who heads SOCAF, said the training is focused on helping partners coordinate a regional response to extremist threats such as Boko Haram, al-Qaida aligned groups and the Islamic State, which has emerged more recently in parts of Africa.

“These threats are a shared challenge we can only meet together,” Bolduc during the Flintlock opening ceremony in Chad. “We are stronger together. We work smarter together to be more effective together.”

For the nations situated around Nigeria, a key focus will be Boko Haram, which from northern Nigeria. The group has forced thousands from their homes, displacing refugees into neighboring states such as Niger, which in turn has become the target of attacks.

“Despite direct support from Chadian troops since 2015 and improved collaboration with the Nigerian army, Nigerian forces have been unable to put a stop to attacks by insurgents, some of whom have links to the Islamic State,” the International Crisis Group said in a report issued Monday.

Attacks by Boko Haram in Niger’s Diffa region have resulted in an extended state of emergency that has limited commercial activities and heightened social tensions in the area, the International Crisis Group said.

This year’s Flintlock is designed to improve coordination of military efforts to protect borders and guard against cross-border attacks. In recent years, western African nations have sought to establish closer military ties as a way to counter extremist groups. Tunisia, which borders Libya, has been concerned about the potential for local unrest as Islamic State fighters return from Iraq and Syria.

Bolduc said a key aspect of the training would be coordinating military elements with local police forces and other arms of government to ensure a unified response to threats.

“This year’s exercise is the most robust and diverse we have planned,” U.S. Army Col. Kelly Smith, commander of the Special Operations Command-Forward North and West Africa, said in a recent statement. “African partner nations have seen the value in this type of regional approach. Combating the spread of violent extremism and protecting the population requires the type of comprehensive, multinational approach Flintlock is designed to foster.”

While building up local forces is a key part of AFRICOM’s counterterrorism strategy on the continent, the military headquarters has also been building up its intelligence-gathering assets. In western Africa, AFRICOM operates out of a drone base in Niger, which provides surveillance capabilities, though so far strike operations have not been conducted.

In all, about 20 nations are taking part in Flintlock 2017, including numerous European nations such as Germany and Britain.