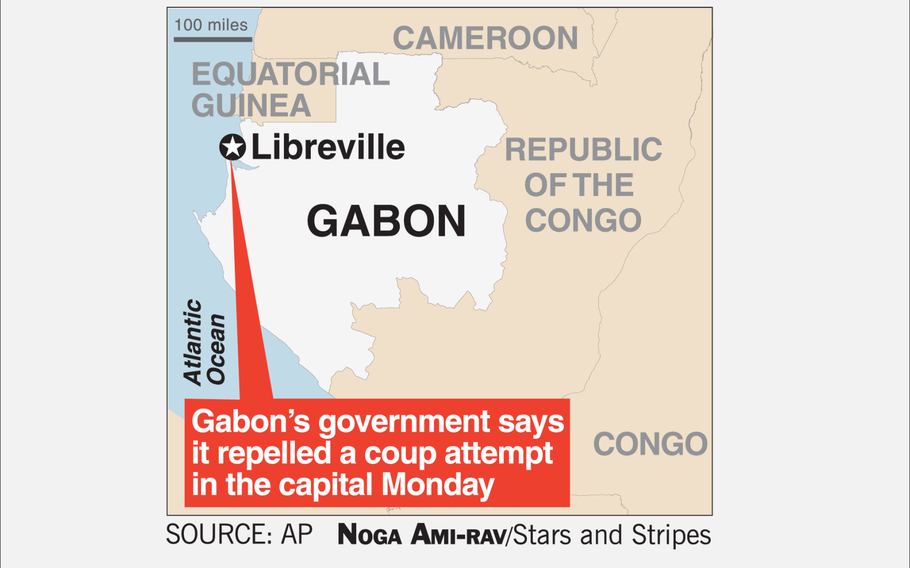 Members of the Gabonese military march under the wing of a U.S. Air Force C-130 Hercules on a flight line in Libreville, Gabon, June 15, 2016. The military in Gabon attempted an apparent coup on Jan. 7, 2019. A small contingent of U.S. servicemembers are in the country amid concerns of violence in neighboring Congo following an election there. (Brian Ferguson/Stars and Stripes) Army paratroopers with the 82nd Airborne Infantry Division rest during jungle warfare school in Gabon on June 16, 2016. The military in Gabon attempted an apparent coup on Jan. 7, 2019. A small contingent of U.S. servicemembers are in the country amid concerns of violence in neighboring Congo following an election there. (Brian Ferguson/Stars and Stripes)

STUTTGART, Germany — A failed coup attempt in the central African nation of Gabon hasn’t yet changed the mission of U.S. troops deployed there last week in response to potential violence in the nearby Democratic Republic of the Congo, U.S. Africa Command said Monday.

On Friday, the White House said it had ordered about 80 combat-equipped military personnel to Gabon amid concerns that elections in Congo would result in violent clashes and possibly pose a threat to U.S. diplomatic assets. However, on Monday members of Gabon’s military launched a coup attempt and seized control of state radio in the country. Later in the day, Gabon’s government said four of five mutiny ringleaders had been arrested.

“At this time there is no change in the status of our forces in Gabon,” AFRICOM spokesman John Manley said as events were unfolding Monday. The troops are not currently tasked with securing diplomatic assets there, he said.

Gunshots were reported early Monday in Gabon’s capital of Libreville. The country’s president, Ali Bongo Ondimba, is reportedly out of the country for medical treatment.

The takeover attempt was sparked by “reinforced doubts about the president’s ability to continue to carry out the responsibilities of his office,” said Lt. Kelly Ondo Obiang, the leader of a breakaway military force, quoted in a Reuters report.

The sudden revolt in Gabon, which has a long history of military relations with the U.S., highlights the region’s volatility. The country plays host to one of AFRICOM’s cooperative security locations, which function as bare-bones launching pads for quick-reaction troops called upon to secure U.S. diplomatic facilities in the broader region.

President Donald Trump, in his letter of notification Friday to House Speaker Nancy Pelosi about the U.S. deployment to Gabon, said more troops could be dispatched to Gabon, Congo or the separate Republic of Congo as needed.

The troops “will remain in the region until the security situation in the Democratic Republic of the Congo becomes such that their presence is no longer needed,” Trump said.