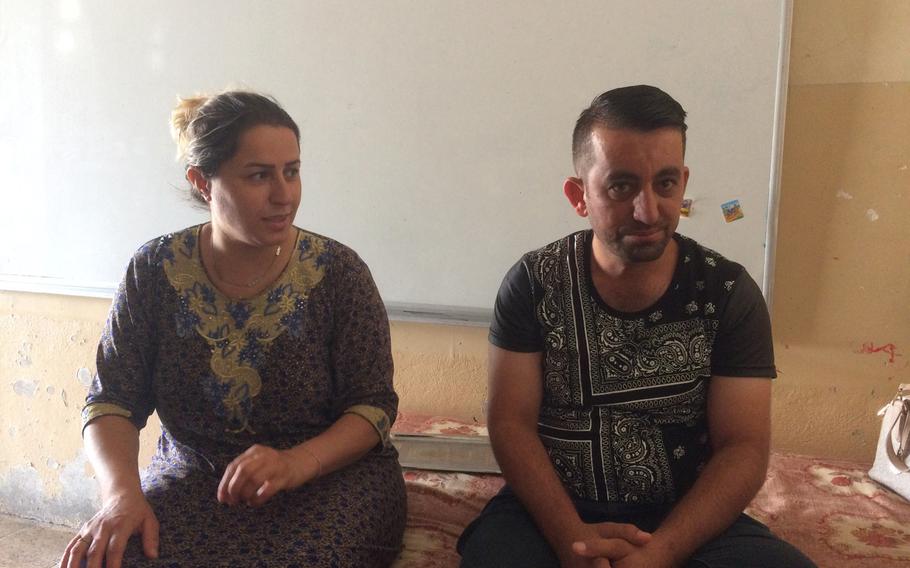 Buy Photo
Yazidi couple Hazna Hassan, 35, left, and Firas Alyas, 40, talk about living in a camp for displaced people in Irbil, Iraq, for three years. They are preparing to return home following the liberation of their town from the Islamic State. (Seth Robson/Stars and Stripes)

Buy Photo
Yazidi couple Hazna Hassan, 35, left, and Firas Alyas, 40, talk about living in a camp for displaced people in Irbil, Iraq, for three years. They are preparing to return home following the liberation of their town from the Islamic State. (Seth Robson/Stars and Stripes) Buy Photo
Firas Alyas, 40, a Yazidi teacher who fled his home in Bashiqa to escape the Islamic State in 2014, has been living in a camp for displaced people in Irbil, Iraq, for three years. (Seth Robson/Stars and Stripes)

The nine-month battle for Mosul, Iraq’s second-largest city, involved some of the toughest urban combat in recent history. That’s taken a toll on ground troops who overcame car bombs, armed drones and suicide bombers to eject the militants. But government forces won’t get much rest before their next operation.

Commanders are preparing to launch an assault on Tal Afar, a city of 200,000 in Iraq’s northern Nineveh province. Tal Afar, located about 25 miles west of Mosul, has been under ISIS control since mid-2014.

“The government of Iraq is going through a decision-making process on how it wants to sequence the next operation,” Work said.

Although the Islamic State has lost nearly two-thirds of the territory it once controlled, it remains active in the country’s northern and western regions. About 4,000 ISIS fighters and 3,000 supporters still control territory in Tal Afar and a few other areas such as the Hawija district near Kirkuk, The Associated Press reported last month.

Maj. Gen. Najm al-Jabouri, commander of the Iraqi Army in Mosul, told Reuters last week that Tal Afar’s wider streets would allow tanks to support his troops in the battle.

Jabouri, a former mayor of Tal Afar, said militants there are exhausted. “I know from the intelligence reports that their morale is low,” he said.

ISIS is also struggling in neighboring Syria, where the U.S.-backed Syrian Democratic Forces have entered and captured a large part of the group’s de facto capital of Raqqa. Meanwhile, Syrian government forces backed by Russian air power are advancing steadily toward the city of Deir el-Zour, ISIS’ final stronghold in eastern Syria near the Iraqi border, where a 10,000-strong Syrian garrison has been under siege for three years.

“It may not be … killing ISIS directly, but it is certainly a vital piece,” she said of her soldiers’ mission during a phone interview.

U.S. support troops are advising their Iraqi counterparts on sustaining field units with ammunition, food and water, as well as how to keep vehicles and equipment in the fight, she said. “Most of our force has been at forward locations to advise and assist for the liberation of Mosul,” Curtis said.

The U.S. advisers have encouraged the Iraqis to repair damaged vehicles and gear closer to the front lines, she said.

“They have fought very hard and very well, but their equipment has taken a beating,” she said. It makes sense to “regenerate combat power faster.”

The Mosul fight came at high cost to the Iraqi security forces, but they have been resilient, Curtis said. U.S. advisers are focused on “maintaining that momentum and that assurance to keep them going for whatever comes next,” she said.

Meanwhile, in Irbil, 50 miles east of Mosul, people who fled ISIS are preparing to leave camps for displaced people and head back to their damaged homes.

Firas Alyas, 40, a Yazidi teacher who fled three years ago from the town of Bashiqa, just outside of Mosul, said he and his family were looking forward to going home once he has repaired their war-damaged house.

The population of the camp they are living in has dropped from a high of 230 to 177 by this week, said Alyas, who has been back to Bashiqa to work on his home. He has spent $1,000 on repairs and estimates it will need another $1,300 of work before it’s habitable.

His wife, Hazna Hassan, 35, said her four children can’t wait to go back to school and that she’s looking forward to going home.

“In the camp, we can’t have visitors or have friends stop by and we share the same bathrooms,” Hassan said. “I don’t have privacy. This is not my house.”