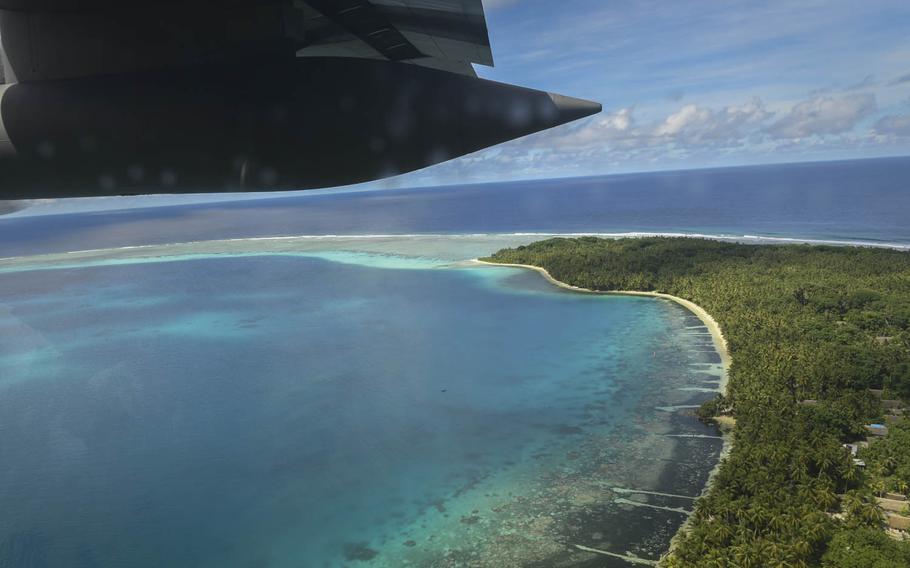 A C-130H Hercules from Yokota Air Base, Japan, flies over one of Palau's approximately 340 islands in the western Pacfiic Ocean, Dec. 11, 2016. (Elizabeth Baker/U.S. Air Force)

The systems would include a series of radar towers on the Palau archipelago, which includes more than 300 islands.

Officials of the two countries last met on Aug. 16 to discuss the proposed radar arrays, according to a joint statement from the office of the president of Palau and the U.S. Embassy in Koror.

The new radar system would complement America’s radars on Guam and Kwajalein Atoll in the Marshall Islands, part of the system that tracks North Korean missile launches.

The U.S. assumed administration of Palau after World War II until the nation gained independence in 1994 and began diplomatic relations with America. As part of a compact of free association that went into effect at that time, the U.S. is responsible for Palau’s defense for 50 years.

The two nations signed a comprehensive review of the compact in 2010, but Congress has not moved ahead with funding the $123.9 million over seven years for Palau as part of that review, which would guarantee America’s exclusive access to the islands.

“I strongly urge Congress to pass legislation to approve and implement the 2010 Palau Compact Review Agreement at the earliest opportunity,” he testified before the Senate Armed Services Committee. “The passage of this legislation will have a significant impact on our defense relationship with Palau, and will provide a measurable advantage in our strategic posture in the Western Pacific.”

Harris has elsewhere expressed concern that China is ready to fill in any vacuum created by a lack of U.S. commitment in Palau.

Palau government officials have held private meetings concerning the proposed radar systems with national and state leaders, traditional leaders, affected landowners and other stakeholders, but final details of the agreement are not being disclosed because of “their sensitive nature,” the statement said.

“The sites provided, which have yet to be finalized, have been chosen with an eye on minimizing environmental impacts,” the statement said.

The deal is expected to be finalized during a meeting in Honolulu on Oct. 26, the statement said.