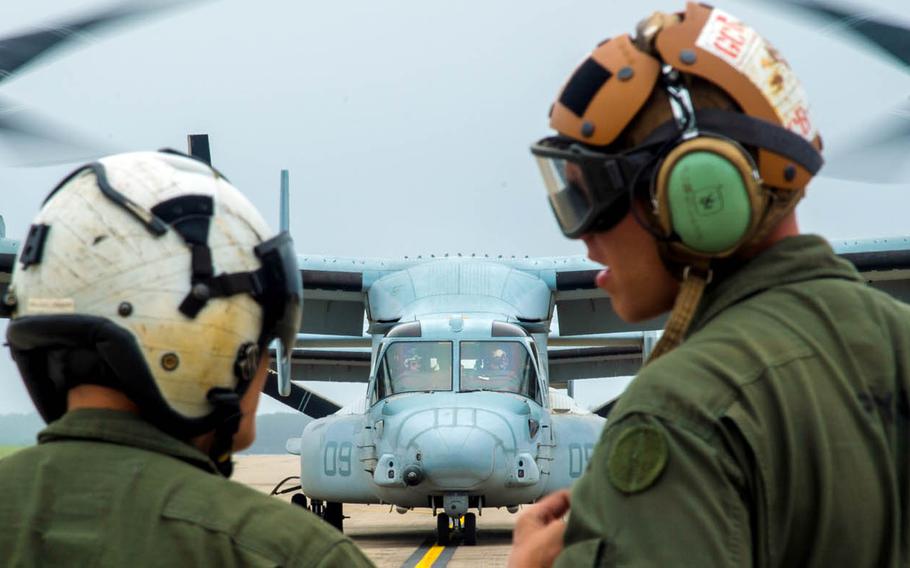 CAMP FOSTER, Okinawa — The Marine Corps plans to fly the MV-22 Osprey during upcoming exercises in northern Japan despite Japanese government requests to ground the controversial tilt-rotor aircraft in the wake of its latest crash.

Japanese Defense Minister Itsunori Onodera requested that U.S. Ospreys “refrain from all flight operations” in the country after three Marines died Saturday when one of helicopter-plane hybrids crashed into the deck of an amphibious transport dock ship and slid into the sea off eastern Australia.

Onodera’s position was reiterated by officials on Okinawa, where the Ospreys are based. Hokkaido Deputy Gov. Hitoshi Kibota visited Japan’s Defense Ministry Wednesday to request that Ospreys not participate in Northern Viper — a bilateral, joint defense exercise in Hokkaido set for Aug. 10-28 — over safety concerns.

“The U.S. military plans to use MV-22 Ospreys in Exercise Northern Viper,” Marine officials told Stars and Stripes on Thursday. “We have confirmed the safety of the MV-22 Osprey and we will continue to participate in exercises and operations throughout Japan.”

Though they plan to field the Ospreys for the exercise, Marine officials said the aircraft’s level of participation is under discussion.

Northern Viper features the 3rd Marine Division and 1st Marine Aircraft Wing and their counterparts in the Japan Ground Self-Defense Force’s 11th Brigade, a Marine statement said. Ospreys, along with UH-1 Hueys and AH-1Z Cobras, are central to the live-fire ground and aviation exercise.

In addition to arms-proficiency drills, this year’s Northern Viper was to include a new program meant to bring Ospreys to alternate and unfamiliar training venues around Japan, exposing them to a wider audience.

“We will coordinate with the U.S. side on the handling of the participation of MV-22 Ospreys in this training based on the request,” Onodera said Sunday. “Based on the understanding that securing safety is the major premise, we will urge the U.S. side to take maximum consideration to safety and to minimize the impact to the local residents.”

The Marines continued to fly the Osprey this week despite Onodera’s request to ground them.

On Wednesday night, the service released a statement saying it had instituted a 48-hour operational pause to review unit safety procedures, launched an investigation into the crash to determine its cause, collected firsthand accounts of survivors, reviewed maintenance logs and crew training records and conducted a thorough preliminary analysis of Saturday’s crash. Squadron members were again drilled on the importance of adhering to flight standards and safety procedures, it added.

“After taking these actions and making an initial examination of the facts and circumstances leading up to the mishap, the MEU determined that the Osprey is safe to fly and resumed operations,” III Marine Expeditionary Force commander Lt. Gen. Lawrence Nicholson said in a statement. “I would never put my aircrews or any local citizens in danger by flying an aircraft that I do not believe is safe and ready to fly. We did not take the decision to continue flight operations lightly.”

Japan is in a precarious situation regarding the Osprey. Due to its shaky development history that included several high-profile crashes, some Japanese are wary of its safety. Expelling it has been a rallying cry for protesters on Okinawa since the aircraft arrived in 2012. The issue helped propel anti-base Gov. Takeshi Onaga to power two years later.

Despite its detractors, the Osprey’s usefulness cannot be overlooked. It can travel at higher speeds and carry more cargo than other helicopters, can land in regions devastated by natural disaster, and has performed well in combat in the Middle East.

Japan itself has ordered 17 Ospreys and expects to receive the first of those by the end of March 2019, a Defense Ministry spokesman said.

Marine officials told Military.com in June that the first Ospreys are set to arrive in Japan next month.