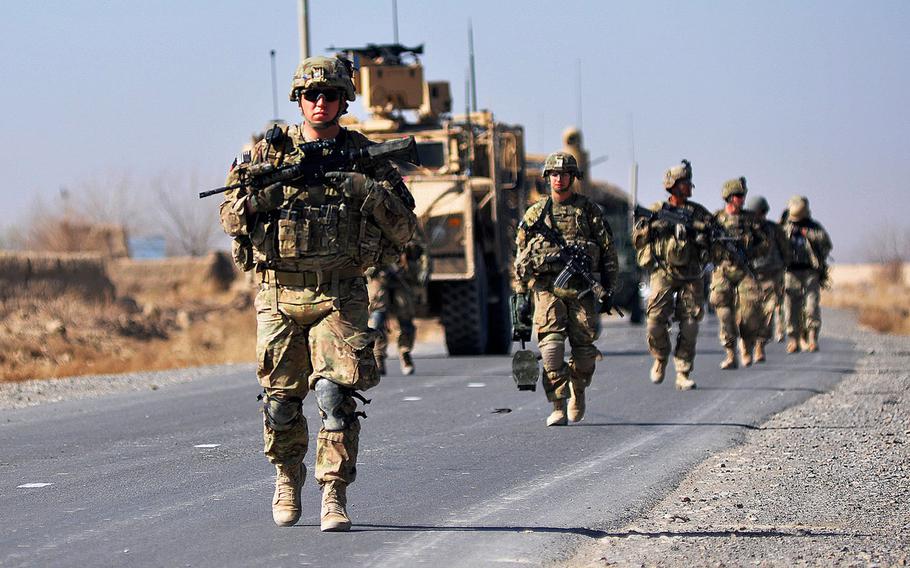 U.S. soldiers move toward a village near Forward Operating Base Zangabad in Kandahar province, Afghanistan, in 2013. The U. S. and the Taliban have drafted an agreement in principle on two of four core issues at the center of peace talks intended to end America's longest war. (Stars and Stripes)

U.S. soldiers move toward a village near Forward Operating Base Zangabad in Kandahar province, Afghanistan, in 2013. The U. S. and the Taliban have drafted an agreement in principle on two of four core issues at the center of peace talks intended to end America's longest war. (Stars and Stripes) 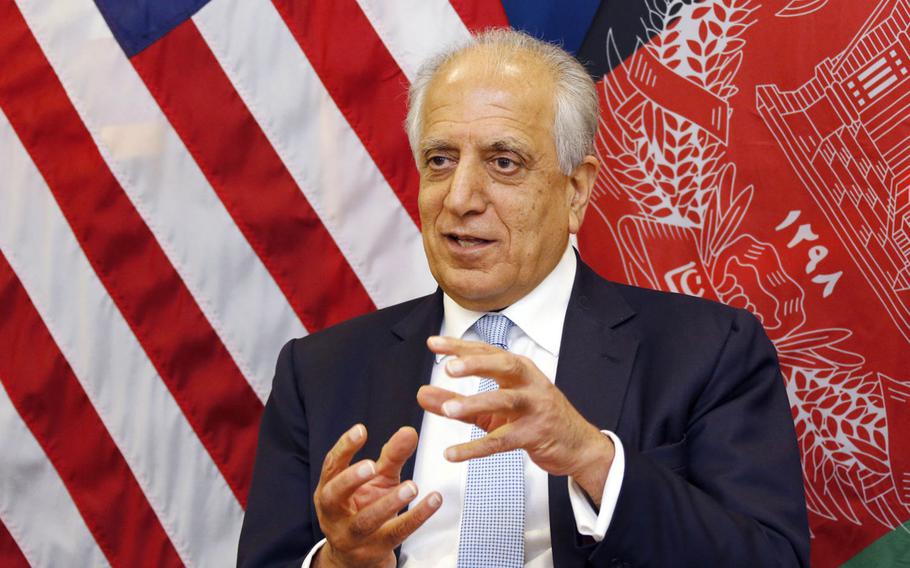 U.S. special envoy Zalmay Khalilzad during a roundtable discussion with Afghan media in Kabul in January, 2019. (Courtesy of the U.S. State Department)

KABUL, Afghanistan — The United States and the Taliban have drafted an agreement in principle on two of four core issues at the center of peace talks intended to end the U.S.’s longest war, but officials and experts say much work remains.

Touted by both sides as “the most substantive” talks to date and “extensive and detailed,” the 13-day round of discussions in Qatar addressed four main concerns: the eventual withdrawal of U.S. and coalition troops from the country, assurances the Taliban would not support terrorism, dialogue between the Taliban and the Kabul government, and an end to the fighting. The parties put terms on the first two of those issues in writing.

“When that agreement, in draft, is finalized, the Taliban and an inclusive Afghan negotiating team that includes the Afghan government and other Afghans will begin intra-Afghan negotiations of a political settlement and comprehensive cease-fire,” Robert Palladino, deputy State Department spokesman, told reporters in Washington on Tuesday.

Officials have declined to discuss details and experts said that despite the advancements, a breakthrough had not yet been achieved. Months or years of negotiations could lay ahead.

“Every time you move from mouth to paper, I do think that’s progress,” said Vanda Felbab-Brown, senior fellow at the Washington-based Brookings Institution. “The question is: is the paper worth any more than the ink that’s written on it? That’s a separate question.”

Even within the agreed issues, sticking points remain, according to media reports. A Taliban official at the talks, who spoke to The Associated Press on condition of anonymity because he was unauthorized to reveal details publicly, said the sides remain far apart on the timeline for a withdrawal of U.S. forces. The Taliban want them to pullout in three to five months, but the U.S. is saying it would take 18 months to two years, he said.

Military experts in logistics and counterterrorism were among the negotiating team, partly to help show the Taliban that an orderly withdrawal after nearly 18 years in the country would take time, the New York Times reported, citing an unnamed American official.

The U.S., meanwhile, has sought a promise from the Taliban that they will not allow Afghanistan to host international terrorists, such as al-Qaida, which launched the Sept. 11 attacks. Osama bin Laden’s successor in al-Qaida, Ayman al Zawahiri, is believed to be hiding in Afghanistan.

The Taliban were reluctant to identify specific militant groups, the AP reported. Senior American officials told the Times, however, that the Taliban had worked out a detailed proposal for an agreement on preventing terrorism in Afghanistan, which specifically mentioned al-Qaida. The officials told the newspaper that they were satisfied with the proposed enforcement mechanisms.

Experts say Taliban leadership must walk a fine line regarding the extremist group founded by bin Laden, for fear for angering the fighters in their ranks. However, the Taliban have increased in strength in recent years and have less of a need to ally with the terrorist group, who have significantly weakened, said Michael Kugelman, deputy director of the Asia program at the Wilson Center in Washington.

“It can get away with distancing itself,” Kugelman said.

The latest round of talks also included the involvement of Taliban co-founder Mullah Abdul Ghani Baradar, another promising sign. The two sides are expected to meet again later this month in the hopes of finalizing a deal ahead of the spring fighting season, the Times reported.

U.S. special envoy Zalmay Khalilzad said on Twitter that he would head to Washington, where he’s expected to brief Secretary of State Mike Pompeo, and would meet with other parties, likely including the Afghan government, which did not take part in the talks in Doha, the capital of Qatar.

“Since Khalilzad says the draft agreements still need to be finalized, that means that the Taliban leadership is still undecided on whether to sign on to whatever they agreed to,” said David Sedney, a career diplomat who served at the U.S. Embassy in Kabul after 9/11, in a phone interview.

Experts also noted that the two other main issues that have yet to be included in the draft — talks between the Taliban and the government in Kabul, and a cease-fire — are likely thornier matters.

The U.S. has stated all issues are interconnected and Khalilzad has said “nothing is agreed until everything is agreed. But the Taliban have leverage on the battlefield and the ability to walk away from talks, Kugelman said. The militant group have long refused to speak with the Afghan government, whom they regard as puppets. Instead, they have chosen to speak with Afghan elites and warlords not in the Kabul government, as they did in widely publicized talks last month in Moscow.

“I’m not optimistic the Taliban will talk to the Afghan government, at least right away,” said Wahid Muzdha, a former Taliban and a researcher who attended the Moscow talks. “But if they do not, it will be chaos.”