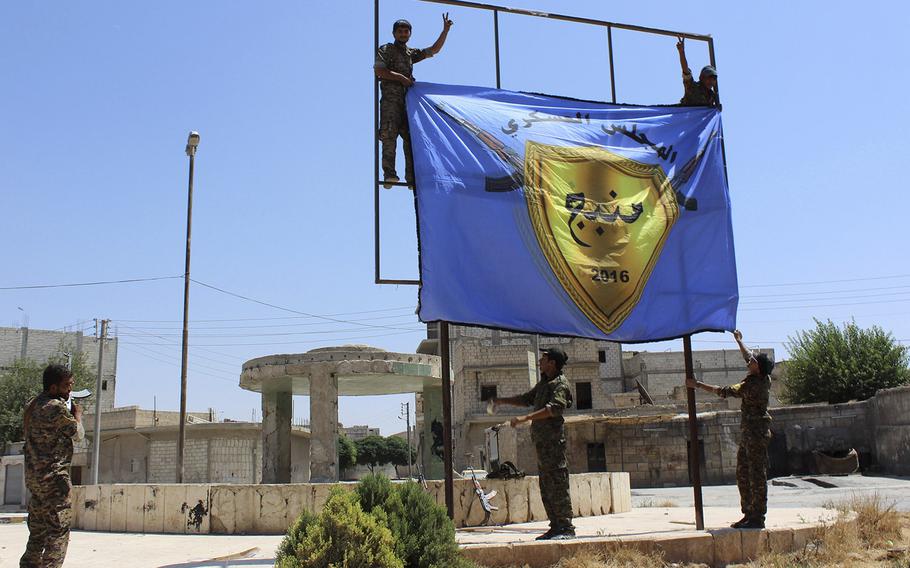 This file photo released on Aug. 8, 2016 by Hawar news, the news agency for the semi-autonomous Kurdish areas in Syria (ANHA), shows Kurdish-led Syria Democratic Forces raising their flag after driving Islamic State militants out of the area, in Manbij, Syria. (ANHA via AP)

Syrian Democratic Forces have taken control of the strategically vital town of Tabqa, about 25 miles west of Raqqa along the Euphrates River, but had two neighborhoods remaining to clear of ISIS fighters, said Air Force Col. John Dorrian, a spokesman for the Operation Inherent Resolve coalition.

Syrian Democratic Forces announced Wednesday that they had seized the town and captured the nearby Tabqa Dam, Syria’s largest and most important hydroelectric dam.

The dam’s seizure clears the path to Raqqa, with an assault on the city expected to begin in the coming weeks.

“The city [Raqqa] is almost completely isolated,” Dorrian told reporters at the Pentagon. “What we can expect is that our partnered forces will continue moving closer to the city to advance to within striking distance.”

He would not say exactly when he expected Syrian Democratic Forces would announce the operation to liberate the city, a battle expected to take months. Fighting in Tabqa began seven weeks ago when the United States airlifted SDF fighters into the city’s outskirts behind enemy lines.

The United States estimates ISIS has about 4,000 fighters inside Raqqa, which the terrorist group has controlled for nearly three years and was once touted as the centerpiece of its caliphate.

“They are not going to give [Raqqa] up easily,” Dorrian said. “They are going to stay and fight, and many of them are going to be killed there.”

ISIS has begun preparing the city for the coming invasion, Dorrian said. The coalition has watched as ISIS has built berms alongside the city’s outskirts, placed booby-traps such as improvised explosive devices and attempted to dam portions of the Euphrates River to flood areas from which they expect the attack to come.

In response, the U.S.-led coalition has focused its air and artillery strikes on eliminating those defenses and the construction equipment that ISIS uses to build them, Dorrian said.

“We’ll do what we can to uncomplicate the situation for our partnered forces as they advance and retake that city,” he said.

The Pentagon announced Tuesday that President Donald Trump had authorized it to provide military gear, including rifles, machine guns and ammunition to the YPG, the Kurdish militia that makes up about half of the SDF, to be used for the Raqqa fight.

Dorrian said Wednesday that directly arming the YPG would “accelerate” the assault on Raqqa.