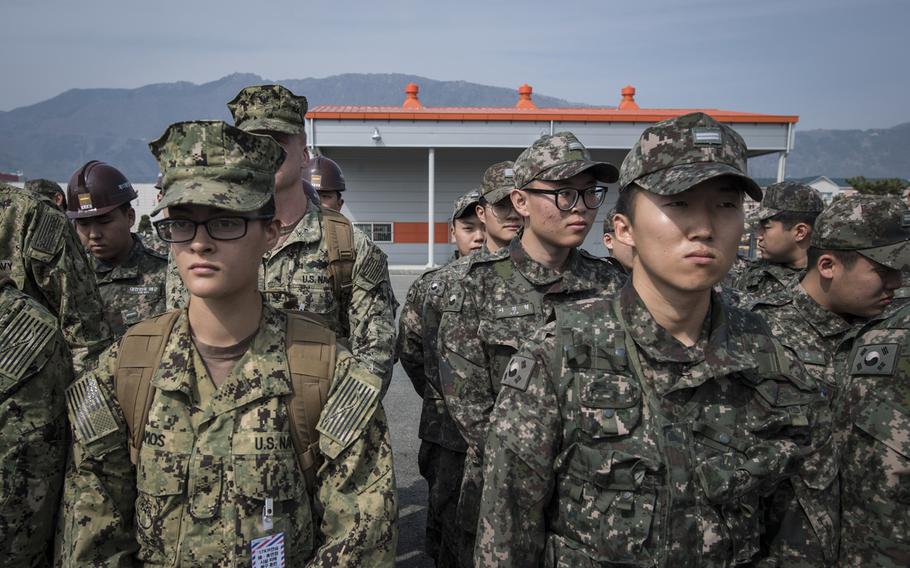 SINGAPORE — The United States will freeze war games with South Korea during nuclear negotiations with the North, President Donald Trump said Tuesday, handing the communist state something it has been demanding for decades.

The stunning announcement reverses decades of U.S. military posture in the region, with joint exercises at the heart of readiness against North Korea’s artillery and more than a million soldiers poised across the border.

Critics said the decision to halt the drills was a major concession to the North that gained nothing in return. The drills infuriate Pyongyang, which considers them a rehearsal for an invasion.

“We will be stopping the war games, unless and until we see that the future negotiation is not going along as well as it should,” Trump said during a press conference after his historic summit with North Korean leader Kim Jong Un.

He called them “expensive” and “provocative,” using terms usually employed by the North Koreans in criticizing the drills. “We’ll be saving a tremendous amount of money,” he said.

American commanders are usually cautious in discussing the drills, insisting that they are defensive in nature and necessary due to the need to “be ready to fight tonight.”

Trump emphasized the cost, noting that the United States flies in supersonic bombers from Guam and deploys other strategic assets to participate.

“So under the circumstances that we’re negotiating … I think it’s inappropriate to be having war games,” he said.

Kim, meanwhile, reaffirmed his commitment to work toward the “complete denuclearization” of the Korean Peninsula, something he already had agreed to during his previous summit with the South.

“We’re ready to write a new chapter between our nations,” he said.

Trump didn’t offer details about halting the exercises, which were already disrupted once this year when springtime drills were delayed for several weeks to make way for the North’s participation in the Winter Olympics.

A U.S. Forces Korea spokeswoman said the command had received no updated guidance on the issue, including about the upcoming exercise known as Ulchi Freedom Guardian that is due to begin in August.

“In coordination with our [South Korean] partners, we will continue with our current military posture until we receive updated guidance from the Department of Defense … and/or Indo-Pacific Command,” Col. Jennifer Lovett told Stars and Stripes in an email.

Washington and Seoul conduct two major sets of exercises each year — Foal Eagle and Key Resolve in the spring and Ulchi Freedom Guardian in the fall. They also hold smaller training exercises throughout the year.

The drills are a flashpoint for tensions because they infuriate the North, which often issues angry denouncements and threats in response.

Experts noted the summit outcome fell far short of the U.S. administration’s goal of the complete, verified and irreversible denuclearization of the North.

“The language on denuclearization was stunningly weak, even given low expectations,” said Adam Mount, a senior defense analyst at the Federation of American Scientists.

“Trump’s offer to end US-South Korean joint exercises is a massive concession,” he added. "It runs a considerable risk of damaging the alliance and will likely invite more assertive North Korean requests in the future.”

Mount said it’s not clear whether Kim requested the freeze or whether Trump offered it unilaterally.

The conservative-led opposition quickly denounced the decision, which came on the eve of local elections.

“South Korea’s security is hanging on the edge of a cliff,” Hong Joon-pyo, the leader of the Liberty Korea party, wrote on his Facebook page.

The United States has canceled the exercises in past years as part of negotiations with the North that eventually collapsed.

A springtime exercise known as Team Spirit was canceled in 1992 and carried out the next year, according to the website 38 North.

The exercise was planned but not executed from 1994 to 1996 as the Clinton administration hammered out the so-called “Agreed Framework,” said 38 North, which is devoted to monitoring North Korean developments.

The deal eventually collapsed and exercises continued, with different names throughout the years.

“This vague agreement is long on trust and short on details and verification,” she said in a commentary.

She stressed the need to protect America and its allies, address the nuclear threat from North Korea and protect long-term U.S. interests in Asia.

“In this regard, we are deeply concerned about the signal Trump sent by calling our joint alliance defensive exercises ‘provocative,’” she added. “This continues Trump’s disturbing pattern of undermining our democratic alliances while praising our adversaries.”

Trump said he has no plans to reduce the U.S. military troop presence as part of security assurances for the North, but he left open the possibility that he will do so in the future.

“We’re not reducing anything,” he said when asked about the possibility of a troop reduction. “At some point … I want to get our soldiers out. I want to bring our soldiers back home.”

The U.S. has some 28,500 servicemembers in South Korea as part of the longstanding alliance between the two countries that fought together in the 1950-53 war.

U.S. military officials say that number sometimes rises to 32,000 with rotations and deployments for exercises.

“I’d like to bring them back home but that’s not part of the equation right now,” he said.

The troops and war games were not mentioned in the final summit document, which focused on security guarantees and a general commitment to denuclearization.

It also included a pledge to improve relations between the two countries, which remain technically at war after the Korean War ended in an armistice instead of a peace treaty.

Moon hailed the results as a “great victory” and “a huge step forward for people across the world who long for peace.”

But he acknowledged further negotiations were needed.

Trump said Secretary of State Mike Pompeo would meet with a senior North Korean official next week to continue discussions.

“This is just a beginning and there may be many difficulties ahead, but we will never go back to the past again and never give up on this bold journey,” Moon said in a statement from his office.